''The eyes of the world will be on you, and you carry a heavy responsibility,'' the UN special envoy Lakhdar Brahimi told Afghan delegates at the first meeting on the future of Afghanistan in the German city of Bonn 10 years ago in December, 2001.

''You must serve your people in a democratic and transparent manner. Their expectations are high and you cannot afford to fail them.''

On Monday, the expectations were just as high during a meeting on Afghanistan's future in Bonn, Germany. Afghan President Hamid Karzai called for international support for "at least another decade," while U.S. Secretary of State Hillary Clinton said her country was prepared to stand with Afghans "for the long haul."

The symmetry of the two meetings in the same city almost exactly 10 years apart gives us a chance to look at what was promised then and what is the situation now.

Then: Afghan delegates to the UN-sponsored meeting on the future of Afghanistan in Bonn, Germany, met at the Hotel Petersberg. They chose an interim authority made up of 30 members with Hamid Karzai as its chairman. Mr. Karzai, however, did not attend the meeting. He was outside the city of Kandahar in southern Afghanistan where remnants of the Taliban were still in control.

He spoke to delegates at the Bonn meeting with the help of the Americans and at the invitation of UN envoy Lakhdar Brahimi. He later told PBS in May, 2002: "I spoke to them on satellite telephone from a very, very cold room. I had a bad, bad cold and I had no speech written. I just spoke from my mind. Later on, Mr. Brahimi told me that it turned out to be very good."

The Bonn agreement led to the creation of a NATO-led International Security Assistance Force, a process to create a new Afghan constitution, a judiciary, and the path to presidential elections after 30 months. Asked about his concerns, Mr. Karzai told the BBC: ''I'm not a man of worries. I believe in God's help and I hope that with God's help we can take the country forward to a much better future.''

Now: With foreign troops set to leave Afghanistan by the end of 2014, the Bonn conference is focusing on transfer of security to Afghan forces, rebuilding the economy with the help of international aid, and reaching a political settlement with the Taliban. Monday's meeting wass overshadowed by Pakistan's boycott of the conference after a row with NATO over air strikes that killed 24 Pakistani soldiers. Who took part? One hundred countries and international organizations, 1,000 delegates, and 60 foreign ministers.

What was said about Karzai

Then: Remarkably little. Mr. Karzai had already slipped in to Afghanistan from Pakistan after the U.S.-led invasion. He was well-known in Washington D.C. but seldom spoken about by administration officials. "American officials are just delighted that Karzai is going to be interim leader," a former senior U.S. diplomat told the Washington Post in December 2001. "But we can't say that and Karzai can't show it much either, because then he would be called an American puppet back home. And being seen as the puppet of any foreign power is political death in Afghanistan."

A month after being chosen chairman, Mr. Karzai was asked by an American journalist whether he thought he had the backing of the United States at the time of the Bonn meeting. "Oh, yes. The United States backed my being chairman very much. So did Britain, so did Germany, so did the Europeans, so did everybody else."

In January 2002, President George W. Bush addressed a joint congress in the State of the Union address: "America and Afghanistan are now allies against terror. We'll be partners in rebuilding that country. And this evening we welcome the distinguished interim leader of a liberated Afghanistan: Chairman Hamid Karzai."

Now: Remarkably little -- but for different reasons this time. Mr. Karzai went on to be elected president in two elections, the most recent one being widely disputed. His government has been accused of corruption and, in leaked diplomatic cables, the U.S. ambassador to Afghanistan said Mr. Karzai "is not an adequate strategic partner." The quiet enthusiasm around Mr. Karzai's leadership in December 2001 is now replaced by quiet disappointment.

What was said about international aid and military cost?

Then: The initial international aid estimate was put at $10 billion over 10 years.

For the United States, the actual military cost at the time of the first Bonn meeting was over $30 million a day, or more than a billion dollars a month.

The Bonn agreement requested the United Nations to authorize the creation of an international protection force for Afghanistan. The first International Security Assistance Force in 2002 numbered 5,000 soldiers from around the world.

Total U.S. military spending: $443 billion spent since 2001, $118 billion in 2011 alone, and another half a trillion over the next decade where America will continue to have a presence in places like Iraq and Afghanistan.

Total Afghan civilian casualties: "The rising tide of violence and bloodshed in the first half of 2011 brought injury and death to Afghan civilians at levels without recorded precedent in the current armed conflict," said the UN's mid-year report on civilian deaths, which numbered 1,462 from January to June 2011.

What was said about the Taliban?

Then: "Generally the Taliban movement or that regime has completely gone away from Afghanistan. The main terrorist bases associated with them have been removed," Mr. Karzai said after his first meeting of the country's new government in December 2001.

"We will see to it that terrorism is completely finished in Afghanistan in all its forms."

As US troops fought in Afghanistan, the Bush administration rejected any negotiated settlement with senior Taliban leaders.

Now: President Karzai said at the Bonn conference that he remained open to talks with the Taliban. His peace envoy, former president Burhanuddin Rabbani, was assassinated in September. The killing blamed on the Taliban.

"The political process will continue to be inclusive, open to Taliban and other militants who denounce violence, break ties with international terrorism, accept the Afghan constitution and defend peaceful life," Mr. Karzai said in Bonn.

Countries like Germany are also pushing for negotiations and a political solution that includes the Taliban: "Reconciliation does not happen among friends but rather between erstwhile opponents. That is what we need to work on," Germany's foreign minister Guido Westerwelle said in the lead-up to the Bonn conference. 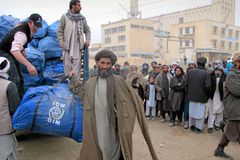 As troops plan their exit, 'Green Scarves' seek safety - and a voice - for Afghan women
November 18, 2011 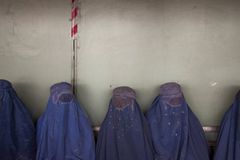