In the wake of mass shooting after mass shooting in America, pro-gun politicians have pressed their opponents into silence by telling them not to politicize the violence.

But after a gunman killed 17 students at a Florida high school with a legally purchased rifle, gun-control advocates served notice that they will not shy away from naming what they saw as the cause of the massacre.

"To those who say now is not the time to talk about gun violence because it's too soon … When is the time? How many more times do we have to do this? How many more folks have to die?" Florida Senator Bill Nelson said Thursday before a silent chamber. "Let's do what needs to be done and let's get these assault weapons off our streets."

Explainer: What we know so far about the Florida school shooting

Senator Chris Murphy, whose home state of Connecticut was the site of the Sandy Hook shooting that left 20 first-grade children dead in 2012, took to the Senate floor less than an hour after the scale of the Florida tragedy became apparent Wednesday. "This happens nowhere else other than the United States of America, this epidemic of mass slaughter, this scourge of school shooting after school shooting," he said, saying the carnage was squarely "a consequence of our inaction" on guns.

But whether the pressure will lead to anything is an open question. Attempts at toughening firearms laws in recent years have either been voted down by Congress or simply forgotten about as the country becomes inured to the epidemic of mass shootings and the debate has fractured along the lines of the country's rancorous partisan divide.

U.S. President Donald Trump on Thursday made no mention of gun laws when he addressed the shooting. "It is not enough to simply take actions that make us feel like we are making a difference. We must actually make that difference," Mr. Trump said in a White House speech. He alluded to "the difficult issue of mental health," but did not specify any concrete "actions" he wanted to take.

And his Republican caucus lined up to argue that it was too soon to discuss the role of firearms in the shooting.

"If you're gonna have that debate about this particular incident, you should know the facts of that incident before you run out and prescribe some law," said Florida Senator Marco Rubio, who has received $3.3-million in donations from the National Rifle Association over the course of his career.

House Speaker Paul Ryan, for his part, warned in a radio interview that restricting access to guns amounted to "taking away citizens' rights," while Texas Senator Ted Cruz appeared on Fox News to accuse Democrats of trying to "politicize" the tragedy.

Wednesday's rampage was the 18th school shooting of 2018, according to a tally by Everytown for Gun Safety, a gun-control group backed by former New York City mayor Michael Bloomberg. Nikolas Cruz, accused in the Florida shooting, legally bought the AR-15 he allegedly used in the killings, The Associated Press cited law enforcement sources as saying. Of the 10 deadliest mass shootings in modern U.S. history, three have taken place in the past five months, with the killing of 58 concertgoers in Las Vegas in October and 25 people at a Texas church in November.

But advocates for stricter firearms laws have been getting increasingly organized in the past decade or so to push back, said Kristin Goss, a Duke University expert in gun safety. Starting with the Virginia Tech massacre in 2007, groups of survivors and victims' families have become ever more vocal as gun-control activists, she said. And Mr. Bloomberg's Everytown has provided a well-funded repository for gun data and a hub for organizing political advocacy.

"There's been a sea change. The pro-safety side is better organized than it was 10 or 15 years ago, and become much more strategic and much more pragmatic," Prof. Goss said. "Family members and victims and survivors have become a really critical mass and are in it for the long haul."

Gun-control groups have scored a string of successes with state and local governments. In the wake of Sandy Hook, New York and Connecticut both tightened their laws on background checks and expanded their bans of assault weapons. After the Las Vegas shooting, Massachusetts and New Jersey, along with the city of Denver, brought in bans on bump stocks, a device used by Las Vegas gunman Stephen Paddock to fire near-continuous streams of bullets.

But federal attempts to close gaps in the country's firearms restrictions have nearly all come to naught. A pair of bills tabled after Sandy Hook attempted to ban assault weapons and do away with a loophole that allows people to avoid background checks when they buy firearms at gun shows or in private deals. Both were voted down by the Senate. And last fall, members of Congress tabled two bills to ban bump stocks, but neither moved forward in the legislative process.

Jaclyn Schildkraut, an academic who has studied mass shootings, said that it was hard to imagine that the current shooting would alter the calculus – given that neither Sandy Hook nor Las Vegas had been enough.

"As much as I would love to be the eternal optimist, I don't think there will be a tipping point," Prof. Schildkraut, who teaches at the University of New York at Oswego, said in an interview. "Two weeks after the Las Vegas shooting, no one was talking about it. People thought 'Oh, that happened,' then moved along."

EXPLAINER
Florida school shooting: What we know so far
February 15, 2018 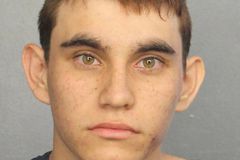 In wake of high school shooting, Florida's embrace of gun culture will come under scrutiny
February 15, 2018 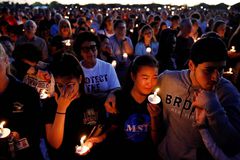 Americans grapple with grief and rage after shooting at Florida school
February 14, 2018 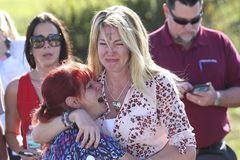 Suspect confessed to carrying out Florida high school shooting: sheriff's report
February 15, 2018
Follow Adrian Morrow on Twitter @adrianmorrow
Report an error Editorial code of conduct
Due to technical reasons, we have temporarily removed commenting from our articles. We hope to have this fixed soon. Thank you for your patience. If you are looking to give feedback on our new site, please send it along to feedback@globeandmail.com. If you want to write a letter to the editor, please forward to letters@globeandmail.com.
Comments are closed