During the last days of his life, Alois Dvorzak spent his nights pacing the corridors of a British immigration detention centre, convinced he would die there.

"I haven't got much time. I have to see my family," he tearfully told a custody officer.

His health was deteriorating. He had trouble eating because of the poor state of his teeth. He said he couldn't sleep because demons were tormenting him.

One night, a nurse found him crying and complaining of chest pains. Staff took him to hospital where, in a final indignity, he died while cuffed by a chain to a guard.

It would be two years and nine months before clearer details of the lonely death of the 84-year-old Canadian became public this fall.

He had flown to London on a mission to find his estranged daughter. Instead, he found himself trapped in a system designed to process and expel failed asylum seekers.

A British coroner's inquest concluded Thursday that Mr. Dvorzak died of natural causes, from heart disease. And an ombudsman report said he received health care in detention equivalent to what he might have expected in the community.

But testimony at the inquest and findings by the ombudsman reveal a calcified, bureaucratic system unprepared to deal with a vulnerable man who had no relatives, leading British officials to consign him to a prison-like centre.

No one was to blame but in a way everyone was to blame. Those who encountered Mr. Dvorzak in his final weeks did their jobs as they were supposed to but they were not adequately prepared to meet the needs of an elderly man suffering from diabetes, heart disease and dementia.

"In the absence of any alternative provision it is difficult to see what else could have been done," said the report by Prisons and Probation Ombudsman Nigel Newcomen. "He had no family and friends in the UK to support him, social services would not help and neither would the Canadian High Commission."

Harmondsworth, where he was held, was hailed by the British government as Europe's largest immigration removal centre when it was expanded in 2010. Operated by for-profit contractors, the centre has also made headlines because watchdog agencies say it is poorly run and because detainees have gone on hunger strikes.

Mr. Dvorzak ended up there after he boarded a flight from Vancouver in 2013.

A retired engineer from Salmon Arm, B.C., he had been a widower since 1991 and lived in a nursing home until he was admitted to hospital for a mental-health assessment. He was discharged and bought a plane ticket to London.

Mr. Dvorzak arrived at Gatwick Airport on Jan. 23, with no luggage, no ticket for onward travel, and $1,400 in cash. He was confused and said he wanted to take a train to France, to find his daughter in Slovenia.

Immigration agents contacted the Canadian High Commission, which offered to help find a hotel. However, because of his bad health, he was sent to a hospital, where he remained for four days.

Immigration wanted to fly him back to Canada on Jan. 26 but the trip was cancelled because he suffered a heart attack the day before.

After he left hospital, he was sent to Harmondsworth on Jan. 28, since a new removal flight had been booked for Jan. 30.

Close to Heathrow Airport, it held more than 600 men. According to Britain's Chief Inspector of Prisons, Nick Hardwick, "much of the centre was dirty and bleak."

The 14-bed inpatient unit that admitted Mr. Dvorzak was "stark and untherapeutic," Mr. Hardwick said in a report.

The Jan. 30 flight was cancelled because a medical escort couldn't be arranged. So he remained at the centre.

Farrah Jarral, a physician who examined him that day, filed a Rule 35 report, a document declaring him unfit for detention.

She also phoned the Canadian High Commission emergency number to say that she was concerned about one of its citizens.

Meanwhile, according to Mr. Newcomen's report, a Canadian consular staff member told British officials that they could help facilitate communications but "the High Commission did not accept responsibility for the costs of removal and was not able to accommodate and care for a person pending their removal."

Leslie Dube, a mental-health nurse, told the inquest that Mr. Dvorzak was distressed but had moments of lucidity and struck him as "an intelligent man … preoccupied with ideas of loss of control and disempowerment."

Vernon Simmons-Dunne, a custody officer, testified that Mr. Dvorzak didn't want to go back to Canada. "He looked tearful. He said: 'I haven't got much time. I have to see my family.'"

Because of staff shortage, Dr. Jarral's Rule 35 report wasn't forwarded to an immigration case worker until Feb. 4. By then, a new flight was arranged for Feb. 6, so they kept him at the centre.

The Feb. 6 trip was aborted after Mr. Dvorzak became agitated on the way to the airport, raising concerns he was unfit to fly. Noel Dixon, his medical escort, recalled him screaming "No, no, no, no!"

Immigration officers tried to transfer him to local social services but were told that, since he wasn't British they had no duty of care for him, the Ombudsman report said.

Mr. Dvorzak was also referred to a psychiatric ward but the hospital said he was too old to meet its admission criteria.

So he remained at the centre, where his condition worsened. He was chained to an officer during his transfers to hospital because staff mistakenly thought he had escaped from a secure facility in Canada.

"It was unnecessary. He was a frail person. He could barely walk. He was clearly unwell," testified paramedic Ricardo Ambrosino, who took him to hospital on Feb. 10. "I questioned the person in charge. He said it was Home Office procedures."

The restraints were only removed when a nurse couldn't find his pulse around 12 p.m. Twenty minutes later, he was declared dead. 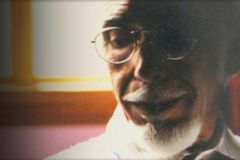