As Mitt Romney watches his presidential hopes recede with each new poll, the "mad genius" behind the Republican nominee's panic-stricken campaign is getting blamed for what many in the party fear is an impending electoral debacle.

Stuart Stevens, a Mississippi native known as much for his extreme hobbies as his record of devastatingly effective election ads, is accused of running a risk-averse campaign that has reinforced Mr. Romney's image as a visionless stick man with no moral compass.

The opposite of his buttoned-down boss, Mr. Stevens thrives on chaos, of which there is now plenty in Romney-land. And with a long list of enemies within the Republican Party, the knives have come out for the 58-year-old adventure-seeker who has skied the North Pole and dabbled in Hollywood scripts. (He wrote for the 1990s TV hit Northern Exposure and was a consultant on George Clooney's 2011 political thriller The Ides of March.)

Mr. Stevens had become the target of disgruntled donors, staffers and right-wing opinion makers even before Mr. Romney's descent in the polls accelerated with the emergence of a secretly taped video in which he disparages almost half of electorate.

Critics accuse Mr. Stevens of being an egotistical dilettante with no real commitment to conservative ideas. He stands out for adventurous personal tastes such as taking steroids to prepare for a gruelling bicycle race and eating at every European restaurant with the top Michelin rating. This has made him a distrusted outlier among the blue-blazer set of Republican campaign consultants and policy wonks.

Mr. Stevens is blamed for giving actor Clint Eastwood a speaking slot at the Republican convention and failing to vet his meandering remarks. He also reportedly threw out two versions of Mr. Romney's convention speech. The rush job he hobbled together at the last minute resulted in a glaring omission: the speech's failure to salute U.S. troops.

Fans of Mr. Stevens insist the ire is misplaced. They say the blame for the campaign's missteps should lie with Mr. Romney, not his chief strategist. And with five weeks to woo swing voters, who usually wait right until election day to cast a ballot, those who have watched Mr. Stevens work his magic say he could still pull a rabbit out of his hat.

"It is the candidate who sets the tone and the image of the campaign and it is the media guy who seeks to capture and convey that on television," said former Massachusetts GOP governor Paul Cellucci, an ex-U.S. ambassador to Canada. "And with 40 or so days to go, I would want Stuart Stevens doing my ads."

Mr. Cellucci hired Mr. Stevens for his successful 1998 gubernatorial run after watching the slick Southerner work wonders for his predecessor, William Weld. By then, Mr. Stevens already had a reputation for producing incisive commercials that made voters laugh at an opponent's expense.

One particular ad that Mr. Stevens produced during Mr. Cellucci's primary race against state treasurer Joe Malone drew on revelations of a "secret slush fund" in the treasurer's office that used public funds to pay for Christmas parties, staff outings and doughnuts.

Mr. Stevens also created the wry 2004 ad that George W. Bush used to reinforce John Kerry's image as a flip-flopping patrician. It used footage of Mr. Kerry wind-surfing back and forth, ending with the tagline: "John Kerry, whichever way the wind blows."

By contrast, Mr. Romney's ads have been humourless and forgettable. The one that has gotten the most notice, accusing President Barack Obama of waiving the work requirement for some welfare recipients, has been slammed as misleading.

"I think [Mr. Stevens] has done well with a candidate who is telegenic, but who, at the same time, is a bit flat and uninteresting," offered Boston media consultant Rob Gray, who was Mr. Cellucci's campaign manager and worked with Mr. Stevens on the Weld and Bush campaigns. "Romney is behind because of a compounding of errors that occurred [after 2005] more than because of anything that has happened in his campaign in the past three or six months."

Indeed, by the time Mr. Stevens signed on as the Romney campaign's top strategist in 2011, – he had a lesser role in the 2008 campaign – Mr. Romney had already earned the reputation that dogs him now.

After establishing himself as a moderate Republican governor of Massachusetts, responsible for legislating publicly subsidized health insurance, Mr. Romney moved sharply to the right in his bid to win the party's 2008 presidential nomination. The transformation has made voters across the spectrum unsure of where he truly stands on the issues.

Mr. Romney has continued to reinforce his weather vane image, promising to repeal "Obamacare" in front of conservative audiences, but recently telling interviewers that his near-identical health care law in Massachusetts is proof of his empathy for the poor.

Still, Mr. Stevens appears to have made a tactical error by deciding to spend sparingly on advertising over the summer, with the intention of saving cash in order to launch an intense ad blitz during final weeks of the race. The Obama campaign took the opposite approach, advertising relentlessly in swing states over the summer in order to define Mr. Romney as a rudderless corporate raider.

Mr. Stevens's approach could still pay off. Mr. Gray credited him with pioneering "rapid response advertising" that capitalizes overnight on an opponent's foibles. If Mr. Obama stumbles in the three presidential debates starting Wednesday, Mr. Stevens could launch ads that seize on the gaffes – and he has the cash to saturate the airwaves with them.

Still, unless he pulls off a massive upset, Mr. Stevens is likely to emerge from the campaign with a diminished reputation and even more free time to pursue his wild hobbies. 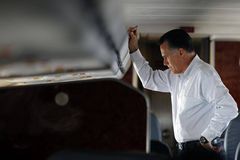