In the middle of Monday's riots in Baltimore, Cynthia Brooks was speaking, emotionally and at length, about her neighbourhood's fragility in the face of looting that destroyed the local CVS drug store. She runs a homeless shelter down the street and was patiently explaining that the median income in the neighbourhood isn't enough to support a Safeway or other major grocery chain, so locals rely on corner stores and the CVS, now gutted. Her voice trembled ever so slightly, but she was firm about the disappointment she felt and the senselessness of looters making her city even harder to live in.

"It's just really frustrating. Baltimore is not a city without its problems, but we never had these kinds of problems to this level," she said.

I've never met Ms. Brooks but I have a sense of what it's like to have an eight-minute conversation with her in the middle of the street because Paul Lewis, a U.S.-based reporter for the Guardian, live-streamed the entire conversation on a smartphone app called Periscope. You can go on Periscope and with a little searching find something happening, right now, in Baltimore or New York or Washington, or any of the places where people are protesting about the arrest and subsequent death of Freddie Gray, a 25-year-old black man taken into police custody on April 12.

Mr. Gray's death from spinal injuries suffered while in custody has become the latest flashpoint in a nationwide debate about police use of lethal force against African Americans and other minority groups. After his funeral on Monday, demonstrations and a night of violence wreaked havoc in Baltimore.

Ms. Brooks's perspective was just one of dozens of live, unfiltered moments streamed for an audience in the millions. Citizens and journalists have spent the week capturing and sharing moments on Vine, Instagram, Twitter, Facebook and a new breed of live-video apps like Periscope and Meerkat.

"For a breaking news event, like a riot scenario, you can provide a raw, unedited and probably more intimate window into what it is like on the ground than a TV network could never provide," said Mr. Lewis, who is still covering the Baltimore story. "Partly that is because journalists holding smartphones are less conspicuous than those with satellite TV trucks. But I think there is also something about the immediacy and intimacy of a snapped conversation on a smartphone that brings a very different perspective."

Pete Sweigard, The Baltimore Sun's assistant managing editor for digital, said: "We've impressed upon reporters to get videos that show all aspects of this story. One of [them] got a video of two rival gang members telling the community not to riot. … That video did really well. Some of our reporters have used the Periscope app to provide live feed; we've used Snapchat as well and Instagram."

As software, Periscope is a work in progress. It's very difficult to find content, you can't filter for geographic location and it's hard for users to manage and moderate commenters. (Live streams barraged by racist invective have forced a number of news organizations in Baltimore to turn off comments altogether.)

But it's easy to set up and start filming: Replacing the 900 kilograms of equipment on a satellite TV truck with an iPhone is a no-brainer for news organizations.

"We're getting to a point in our society where there's a tendency to not believe people unless there is video of it," said Ryan J. Reilly, the Huffington Post's justice reporter. He was one of the journalists arrested, on video, while covering the protests in Missouri following the killing of Michael Brown in August, 2014.

After covering months of mounting pressure for more body-cameras on police in U.S. cities, he's become a believer that the presence of live video can add accountability to all sides.

"I think what this does, it unframes media," said Arthur Kroker, Canada research chair in technology culture and theory at the University of Victoria. He believes these new streaming technologies are a potent tool for citizens to do their own forms of journalism.

"Mass media frames narrative, gives you story lines and gives you an emotional context, and it's pretty predictable. I think these are really transformative technologies."

But as excited as some in the tech and media community are about a potentially disruptive media power in the hands of citizens, others express reservations.

"The thing I worry about is there's a kind of cheerleading around social media, that it will resolve a bunch of perennial issues in American life, and I'm just not sure that's the case," said John Wihbey, managing editor of Journalist's Resource at the Shorenstein Center at Harvard's Kennedy School of Government.

He said the initial excitement over the Arab Spring and other so-called Facebook revolutions has soured after years of chaos have followed these popular uprisings.

The Periscope app has somewhere north of one million users, according to CEO and co-founder Kayvon Beykpour, which is still quite small compared to other video apps. At this stage, most of the videos on the site are not exactly newsworthy: people working out, singing or just taking questions.

One of the ways to measure Periscope's impact is whether it was being talked about on Twitter, which owns the service and lets users seamlessly share it. Data from Twitter analytics site Topsy shows that so far the most widely seen Periscopes were by celebrities like Ellen DeGeneres and Mariah Carey, though Baltimore's unrest was among the most watched news events thus far.

"A decade ago, I'd have been glued to cable news, even as recently as the tsunami [in Japan in 2011]," said Jim MacMillan, a long-time photojournalist who now runs the centre for public-interest journalism at Temple University in Philadelphia. "This time I hardly glanced at cable at all. I followed dozens of links to Periscope. … The mobile live video experience really transports you."

Even Baltimore city officials have used Periscope to speak directly to citizens, as city council president Bernard C. "Jack" Young streamed live on Monday "I am asking all of you out there looting to stop it. Please stop it. It's hurting the city of Baltimore in more ways than one."

Tensions explode in Baltimore, a city battered by poverty, drugs and neglect
April 28, 2015 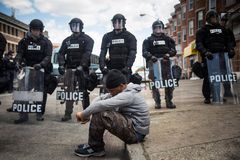