In a city sometimes riven by tensions between locals and tourists, those differences were put aside Friday afternoon as thousands stood shoulder to shoulder, observing a minute of silence in solidarity with the families of the 14 dead and many more hurt, all victims of Thursday's horrific terrorist attack in the heart of one of Europe's most beloved cities.

Announced by Barcelona Mayor Ada Colau late Thursday night, word of the vigil at the site of the terror attack spread quickly on social media, bringing thousands streaming down the Passeig de Gracia, the city's luxury shopping thoroughfare. But for once, the stores stood empty as people raced to the Plaza de Catalunya, only metres from the scene of chaos and fear that struck at the epicentre of the city's tourist zone.

When the silence broke, it was replaced by the sound of clapping, 10 minutes of Barcelona announcing to the world that though some had listened to local police and stayed home the evening before, they were now back in the streets, unafraid and together. "No tinc por," the crowd chanted for several moments: "I am not afraid" in Catalan.

Barcelona attacks: What we know so far

In Photos: Images from the scene following the deadly van attack in Barcelona

Residents said they would continue to uphold the values they believe their city represented – peace, equality and justice.

"Barcelona is an open city, it is so cultural, it is so multicultural," said David Ibanez Herman, who was wearing a multicolored flag with the word "PACE" (peace in Italian). "It's a city where Muslims march peacefully against terrorism, against injustice … and I believe it will continue to be the same."

Mr. Herman said that although his city was not spared the terror attacks that have hit Europe, it was a city different than any others on the continent.

"We have a view really opposed to the rest of the country, the rest of Europe, the rest of the world," he said. Thousands marched against the war in Iraq, then in Syria, and most recently, this winter, to pressure the Spanish government to resettle more Syrian refugees, he said.

"Now Barcelona will be known to the world for these bad news," he said.

Others who attended the vigil said no one expected the Ramblas would be a target, and that the central railway station and the airport had seen more intense police patrols this summer.

Yet, in retrospect, the avenue was a logical target if someone wanted to draw the attention of the world. That the citizens of more than a dozen nations were hurt while searching for the simplest of pleasures Barcelona offers – freshly-squeezed orange juice in the Boqueria market, a ham tapas and a good espresso – was unbearable, they said.

"We came here for all the people who suffered, for all this pain," said Javier, a life-long resident of Barcelona, who did not want to give his last name. His wife, Maria-Louisa, preferred to take her evening and weekend walks in their neighbourhood north of the centre, but he often walked the Ramblas and the surrounding streets, he said.

"The attack is not surprising, because it happens elsewhere and everywhere in the world. You don't think it is ever going to happen in your city until it does," he said.

Others said the attack would intensify divisions between the Generalitat de Catalonia, the region's autonomous government, the municipality and the national minority government of Prime Minister Mariano Rajoy.

"There are so many things mixed up in this attack," said Maria Vilararasa, another life-long resident of Barcelona. "The disagreements between Catalonia and Rajoy, the city's feeling against tourists," she said.

Indeed, only a week before the attack that claimed the lives of 14, hundreds of residents of Barceloneta, one of the most tourist-heavy neighbourhoods, took over the local beach to protest against the growth of vacation apartments. Ms. Colau, the mayor, rose to power partly because of her support for measures that limit tourism, most recently a cap on the number of hotel and apartments available.

It is not clear who would be in the city in August if it were not for tourists. Outside the centre or the beaches, where finding a space a millimetre away from another tanned body is a stroke of luck, the streets are quiet.

Many shops close until September. Others advertise the last days of the annual summer sales but have few clients.

Still, much like the show of solidarity between Mr. Rajoy and Catalan President Carles Puigdemont, who both attended Friday's vigil, residents and tourists put aside any tensions.

"Life is almost normal today," said Rafael Pereira, a tourist from Portugal who had come to Barcelona on Sunday to attend the annual Circuit gay music and dance festival.

Mr. Pereira was strolling up the Passeig de Gracia after observing the minute of silence. On Thursday afternoon, he had been in a restaurant on the Ramblas when people around him got up and began running. He did the same, seeing bodies on the street and not sure of what had happened. Because his hotel was near the attack, it was evacuated. He spent the night crammed with others in a hotel nearby. 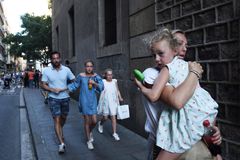 Country-wide manhunt under way after 14 killed in Spanish attacks
August 18, 2017
Knife attacker in Finland targeted women: police
August 18, 2017
Follow Simona Chiose on Twitter @srchiose
Report an error Editorial code of conduct
Due to technical reasons, we have temporarily removed commenting from our articles. We hope to have this fixed soon. Thank you for your patience. If you are looking to give feedback on our new site, please send it along to feedback@globeandmail.com. If you want to write a letter to the editor, please forward to letters@globeandmail.com.
Comments