A collapsed ceiling in a Cambodian sneaker factory has killed three workers and intensified concerns about the conditions in which some of the world's biggest brands are made.

Though not nearly as disastrous, the incident is the first major echo of Bangladesh's Rana Plaza collapse last month. That event killed 1,127 workers and became a soul-searching moment for the garment industry and the Western brands that source their clothes there, such as Canada's Joe Fresh. As a result, many major retailers have promised tougher enforcement of safety rules.

"I heard the middle building collapse. It shook the other buildings. Then there was silence. No cries for help," Rim Ron told The Globe and Mail after the Cambodian collapse. A 29-year-old machinery repairman, Mr. Rim was just a few metres away from the section that imploded. His 22-year-old nephew, Rim Sareoun, was one of the three people killed.

Thursday's deaths indicate that the problems of poor working conditions extend beyond the borders of Bangladesh. "It shows these abuses are not exclusive to Bangladesh," said David Welsh, Cambodia country director for the American Center for International Labour Solidarity, a non-profit group that supports trade unions in developing countries. "The industry [in Bangladesh] is 10 times bigger, but in both places it's an industry that preys on extremely low wages and the ability to cut corners."

"I knew my nephew was in there, but there was nothing I could do to help him," Mr. Rim said. "I tried to pull the rocks and factory equipment off, but there was too much for me to lift."

A monitoring report released last month by the International Labour Organization found that 57 per cent of the 130 Cambodian garment factories visited had obstacles in the way of fire exits, while 88 per cent exceeded legal overtime maximums and 78 per cent had "unacceptable heat levels" on the work floor.

Earlier this week, top global brands including Benetton, H&M – as well as Joe Fresh purveyor Loblaw Cos. Ltd., owned by Canada's Weston family – signed a deal to improve fire and building safety to avert future disasters. Almost all of the major U.S. clothing chains – including Wal-Mart, Target, Gap Inc., and J.C. Penney – however, have refrained.

Ith Sam Heng, Cambodia's Minister of Social Affairs, told Reuters there would be consequences for the deaths."We will investigate the case and we will take measures against those involved," he said.

ASICS acknowledged Thursday that some of its running shoes were made at the Wing Star factory. "Our prayers go out to the families of those who have died," a company spokeswoman said.

The workers had just arrived for the 7 a.m. start of their 10-hour day when the warehouse roof fell on top of them. Three people, who earned $80 a month making shoes for ASICS and other brands, were crushed to death.

A few hours later, the centre of the factory was a heap of cement chunks, twisted aluminum and multi-coloured ASICS shoes. As construction equipment pulled at the rubble, dried pools of blood became visible on the floor.

The Taiwanese-owned Wing Star is one of the largest factories in Cambodia, with about 7,000 employees. Only about 100 workers were inside the warehouse building at the time of the collapse. The stress of the equipment and supplies piled on its top has been blamed. Eight people were also seriously injured.

Ken Loo, secretary general of the Garment Manufacturers Association in Cambodia, an industry lobby, said the Wing Star factory was well-built, but that the warehouse area had been added on by a construction company that had obviously disregarded standards. "We have always advised our members to please use credible construction companies," he said. "Please don't use shoddy construction."

Mr. Loo said many Cambodian garment factories were squeezed for cash by Western brands that regularly threaten to shift production elsewhere if the clothing and shoes can't be produced at a buyer-set price.

Cambodia's industry, like that of Bangladesh, is vital to the country's economy, accounting for about 75 per cent of its exports and employing some 500,000 people, nearly all of them women. Western companies come here for the cheap work force (Cambodia has the second-lowest garment-sector minimum wage, after Bangladesh) and the loosely enforced building codes and labour standards.

Wing Star moved quickly into damage-control mode after the collapse. The Rim family said the company had given them $1,000 (U.S.) to cover the costs of the funeral, which they held at their thatched-roof home.

As Rim Sareoun's mother wailed in heartbroken grief over his bloodied and bruised body, Rim Ron stood apart from the rest of his family, still wearing his lime-green Wing Star Shoes uniform.

In a day or two, he said, he will go back to work in the same factory where his nephew had died. The family needs the money, he said.

Fashion retailers Inditex and H&M back building accord
May 13, 2013 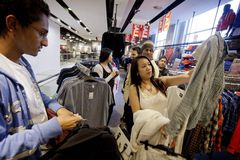