Coming from Wolf Blitzer, the caution was a little bit unexpected.

As the lead anchor on a series of tragedies, Mr. Blitzer has come to personify the mainstream media's struggle to break news at the speed demanded by social media. His network has been particularly vilified, especially after identifying the wrong shooter after the Newtown, Conn. school shooting.

The shooter's brother Ryan Lanza took to social media to correct the record, tweeting "CNN, it wasn't me."

As CNN's cameras panned over the bloody street near the finish line of the Boston Marathon, it was clear the lessons of the past have been taken to heart. It was Mr. Blitzer who repeatedly cautioned viewers that the network wouldn't report on anything until they were absolutely sure it was true. He prefaced almost everything he said with "I say this with an abundance of caution," particularly when referring to possible injury counts and death tolls.

In other words, while some people were getting snippets of news from the Internet, the nation's largest news outlets were acting like news outlets by verifying news before passing it along. It's the way it's supposed to be, but after several years of trying to compete with social media it would seem large news organizations finally understand their success isn't necessarily tied to being the first to report every little detail.

Of course, there are always exceptions. The NY Post – which isn't particularly known for its restraint at the best of times– jumped out yesterday with a story about a Saudi national being arrested and said as many as 12 people were dead as of late afternoon. As several people were quick to point out – it's either the best-sourced newspaper in the country or it's completely wrong.

Other outlets followed the same course as CNN – preferring to contain their tweets to fact and chase the bigger story rather than the gritty, but incremental, details. The Boston Globe provided information through the day via its website and Twitter feed, but the bulk of its amazing reporting could be found not bombarding readers 140 characters at a time but in the Tuesday edition of its newspaper where it told the stories of the victims in heart wrenching details.

"This is how bad this is," columnist Kevin Cullen wrote. "I went out Monday night and bumped into some firefighters I know. They said one of the dead was an 8-year-old boy from Dorchester who had gone out to hug his dad after he crossed the finish line. The dad walked on; the boy went back to the sidewalk to join his mom and his little sister. And then the bomb went off. The boy was killed. His sister's leg was blown off. His mother was badly injured. That's just one family, one story."

That's a story that you don't tell in 140 characters, and a story that is worth slowing down to do properly. And it would seem that the traditional news media has finally found a way to co-exist with the bloggers, tweeters and aggregating websites which can deliver bits of news quickly, but often sacrifices accuracy and truth for timeliness.

The secret? An abundance of caution, and a return to the basic tenets of journalism that have always held being right in higher regard than being first.

Images from the site of the explosions
Gallery
April 15, 2013 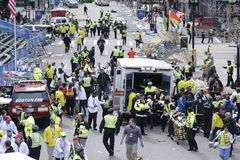 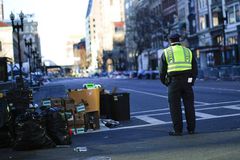 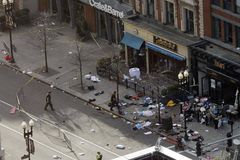 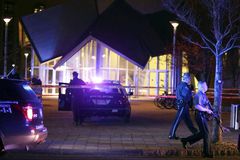