In 1939, when Peter Jordan was 15 years old, his parents sent him to England to escape Nazi Germany. They remained behind in Munich. Two years later, Siegfried and Paula Jordan were deported, together with 1,000 other Jews from the city. Their destination was German-occupied Lithuania, where they were shot and killed.

About a decade ago, Mr. Jordan was contacted by a group of schoolchildren in Munich who were researching the city's history. They asked his permission to memorialize his parents with stolpersteine, or stumbling stones, a new commemorative project sweeping across Germany. The small cubes topped with a brass plate are installed by an artist in the pavement outside the former homes of Holocaust victims. The simple inscriptions show the victims' names, when they were deported and where and when they were killed.

Mr. Jordan, now 92 and a retired architect in Manchester, travelled to Germany for the installation of his parents' stumbling stones. "It was the first time since I left Munich that I felt a little bit at home again in my birthplace," he recalled. Just weeks later, however, he got a phone call: The squares had been torn out of the ground on the order of the city government. It felt, he said, as though his parents had been desecrated "for the second time."

In the years since, the stumbling stones have spread throughout Germany and to 20 other countries. Around 56,000 have been placed to date. The small squares, bright against the greyness of the surrounding sidewalk, draw the eye and encourage passersby to read them. But Munich, alone among the more than 1,000 German cities and towns consenting to the project, has remained steadfast in its opposition.

Last month, a group of family members of Holocaust victims, including Mr. Jordan, filed a lawsuit against the city. They claim that its decision to forbid the stumbling stones – in favour of alternative forms of commemoration, whose details have yet to be decided – is against the law.

The struggle over the project marks another chapter in the long effort to remember Nazi crimes at a time when fewer and fewer survivors of the Holocaust remain. The debate reached a turning point this past July, when a large majority of the city council voted to disallow the stumbling stones but endorse pillars or plaques at the homes of victims. They cited the opposition of the leader of the city's Jewish community, who has said that placing the stones on the ground is disrespectful.

Other Munich Jews disagree, however. They say individual families should be able to decide how their relatives are memorialized. "It's completely absurd to allow [other forms of commemoration] and to forbid stolpersteine," said Hannes Hartung, the Munich lawyer fighting the case. "There is not a right way or a wrong way. The only right way is to respect each other."

In Munich, even more than elsewhere in Germany, reckoning with the past is a difficult task. Today the Bavarian capital is better known for its annual Oktoberfest festival, a symbol of German bonhomie. But it is also the place where the Nazi party was born, the place where Adolf Hitler launched his political career, the place where systematic persecution of Jews and opponents began.

Munich "is the most jolly, friendly, beautiful, well-run city in the world," said Terry Swartzberg, an American who has lived in Germany for 30 years and is leading the campaign for the stumbling blocks in Munich. "It also has the most despicable and horrible past of any city you can imagine."

Just seven months ago, after decades of effort, the city opened a museum devoted to its Nazi past. A sleek white cube-shaped building, it sits on the site of the "Brown House," the former national headquarters of the Nazi party. An exhibit notes that for years, Munich's special role in the Nazi movement was almost invisible – something that only began to change in the 1980s, thanks to the work of citizen initiatives.

Charlotte Knobloch, the president of the Jewish community in Munich and Upper Bavaria, is a prominent opponent of the stumbling stone project. As a child, she survived the Holocaust by pretending to be the daughter of Catholic farmers. She declined to comment through a spokesman, who provided a statement she made a year ago at a city hearing on the stumbling stones. Those murdered in the Holocaust deserve more than an inscription surrounded by "road grime and worse pollution," she said. "On the ground the victims are once again defenceless."

Both Mr. Jordan and Mr. Swartzberg say they've attempted to discuss the matter with Ms. Knobloch, urging a compromise. By last summer, Mr. Swartzberg had assembled 100,000 signatures in favour of the stumbling stones. The city's own cultural department recommended including the stones as one of several available forms of commemoration, since they are "seen as a much valued form of remembrance" in other cities, a spokesperson for the department said.

The city council decided otherwise. Dieter Reiter, the mayor of Munich, said that his main objective in deciding this matter was to gather as broad a majority as possible "due to the very sensitive task and especially due to the strong feelings against any form of remembrance on the ground" voiced by Holocaust survivors represented by the Jewish Community of Munich and Upper Bavaria, led by Ms. Knobloch.

Mr. Jordan, the retired British architect, views the city's recalcitrance slightly differently. "Munich is a beautiful town," he said. Having inscriptions in the ground where Holocaust victims lived would disturb the city's gemuetlichkeit, he said – its feeling of coziness.

As an alternative, the city endorsed plaques or pillars at the former homes of individual victims. It has selected a jury to evaluate artist proposals for the designs and make recommendations next year. Proponents of the stumbling stones are skeptical that the plans will ever be realized: Any plaques on walls would first require the approval of a building's owners, not a simple task in Germany. Meanwhile, the pillars, or stelae, would sit on public property but there are no details about their size, appearance, cost or the procedure required to install one.

By contrast, the stumbling stones are relatively small – approximately 10 centimetres on all sides – and cost the equivalent of $175 each. There are already several installed in Munich, but only on private property as a consequence of the city's ban. The rest are sitting in basements and closets, awaiting a permission that has never come.

Meanwhile, Gunter Demnig, the Cologne-based artist who installs the stumbling stones, is already booked through August of next year, crisscrossing Germany and beyond – France, Italy, Spain, Slovakia, Greece – to place the stones and deliver lectures. Belarus and Macedonia will soon join the list.

Thomas Nowotny is a pediatrician who lost 13 members of his family living in Munich in the Holocaust. He remembers the first time he went to an installation ceremony for a stumbling stone with his teenaged son. More than 100 people were there – local residents, survivors, journalists. "We were really overwhelmed," he said. "To have this open ceremony and have the name put back to the place where it belonged … it's very, very profound."

Children of the Holocaust return to Auschwitz and pay tribute to those who saved them
January 26, 2015
French Holocaust deportation survivors can now seek compensation
November 3, 2015 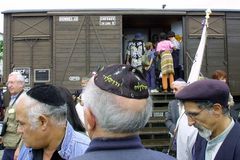 Auschwitz survivor recalls liberation from infamous death camp
January 23, 2015
Follow Joanna Slater on Twitter @jslaternyc
Report an error Editorial code of conduct
Due to technical reasons, we have temporarily removed commenting from our articles. We hope to have this fixed soon. Thank you for your patience. If you are looking to give feedback on our new site, please send it along to feedback@globeandmail.com. If you want to write a letter to the editor, please forward to letters@globeandmail.com.
Comments