It's been nearly a year since Myrna Ramirez walked out of jail for the last time, but she still can't quite believe she is free. She can't believe, in fact, any of it: that she served nearly 13 years in jail for attempted murder, that she nearly bled to death in police custody, that she missed her daughter's childhood – all because she went into premature labour at home one night, asked a neighbour for help, and that neighbour reported her to authorities for attempting to terminate a pregnancy.

She joined a prison wing full of women who ran afoul of El Salvador's abortion law, perhaps the most restrictive in the world. "It's like some kind of nightmare," Ms. Ramirez says.

In 1998, after the civil war, El Salvador adopted a new law that outlawed abortion in all circumstances. Unlike the law it replaced, there are no exceptions for cases of rape, severe fetal abnormalities or threat to the mother's life from pregnancy. Only six other countries in the world, all in Latin America and the Caribbean, have similarly prohibitive laws; in one, Chile, the President is pushing an easing of the law to allow abortion in some situations.

El Salvador, however, has the most active enforcement of its abortion law. Here authorities investigate and prosecute women whose pregnancies end before 40 weeks in what may be miscarriages or stillbirths or preterm labours, such as Ms. Ramirez's. Judges have sentenced women convicted of terminating pregnancies to prison terms of up to 40 years.

This zealous enforcement goes on even as El Salvador is in the grip of a massive public-security crisis, with a spiralling homicide rate that is now highest in the world, according to United Nations figures. Police and the judicial system seem unable or unwilling to address the lawlessness in the country's streets, but continue their intense focus on the reproductive activities of its women, said Morena Herrera, a member of the Feminist Collective, a group lobbying to have the law loosened.

The law sets out a punishment of two to eight years in prison for a woman who terminates or attempts to terminate a pregnancy, and the same penalty for anyone who provides her support, economic or otherwise, to do so. Health-care professionals face penalties of six to 12 years in prison, and loss of their licence, for providing abortions. But the level of ignorance around both human reproduction and the law means people motivated either by moral righteousness or fear that they could be implicated as accomplices routinely report women whose pregnancies end naturally, said Dennis Munoz, a lawyer who defends women prosecuted for "pregnancy-related offences."

Vilma Garcia, 33, for example, found herself handcuffed to a hospital gurney in 2010. (This is not her real name. The Globe has changed her name and is using Ms. Ramirez's middle name, because these women fear being publicly identified due to the enduring stigma about abortion.) Ms. Garcia was the married mother of a nine-year-old and using birth control, and had no idea it had failed. "The first I knew I was pregnant was when I was having a miscarriage." She began to hemorrhage and lost consciousness in her bathroom one night; her husband took her to hospital, where staff reported her for a suspected abortion.

"I woke up and I was handcuffed and I knew I was going to go to jail for something I didn't do." She spent 11 months in jail charged with homicide, and her husband was held for seven months as a suspected accomplice, before a human-rights organization managed to get the charges dropped.

Miscarriage – known as spontaneous abortion in medical terms – is not illegal, but few people make or want to risk making the distinction, Mr. Munoz said. Similarly, a stillbirth or preterm labour after 20 weeks gestation is not covered by the abortion law, but doctors, nurses and neighbours report women who experience them to police – that's how two-thirds of cases are opened. The law is bad enough as written, but the situation is compounded by "an excess of ignorance and unwillingness to investigate," he said.

And because police are poorly trained and there is minimal capacity for forensic investigation, women such as Ms. Garcia spend months or years in jail until their case is released by the courts. Some are less fortunate and are convicted, of aggravated homicide, because the state does not ask for or accept proof that the fetus was born dead, he added – instead judges demand proof the woman "really wanted" the pregnancy. Mr. Munoz works on the cases of 21 women serving sentences of 25 years or more – the longest, more than 40. Approximately a dozen women a year are charged, and dozens more spend months or more in jail until a lawyer (and only a few will take the cases) can show the pregnancy ended naturally.

Two years ago, the Salvadoran law drew intense international attention when a woman known by her first name, Beatriz, whose life was threatened by her pregnancy and who was carrying a fetus that lacked a brain and would not survive gestation, fought in the courts for the right to terminate her pregnancy before it killed her. She did not win the court fight, but her doctor, Guillermo Ortiz, was able to save her life after she went into early labour.

The Inter-American Court of Human Rights, the regional judicial body of the Organization of American States, repeatedly ruled that the Salvadoran government must give Beatriz access to a termination; Amnesty International called it "torture" to deny her a life-saving abortion, while she suffered through a lupus crisis and her kidneys began to fail. On the other side, Jose Luis Escobar Alas, the archbishop of San Salvador, accused Beatriz's lawyers of lying about the kidney damage, trying to "use an emblematic case to legalize abortion."

Her case made headlines, but it was not unique. "I have to deal every day with cases like Beatriz," said Dr. Ortiz, who is a staff gynecologist at the largest public hospital in the country. "Women come to our hospital looking for solutions to their problems." He cannot offer them the one procedure that would save their lives, or preserve their health. And he said he doesn't know how many others never come because they have heard the stories of women arrested when they came to hospital seeking help.

When he spoke to The Globe, for example, he had two patients with ectopic pregnancies – women at imminent risk of death when their fallopian tubes ruptured. Yet due to fear of prosecution, he could not remove the embryo, even though it stood no chance of survival, but instead he had to stand by until the inevitable rupture occurred and hope he managed to operate in time.

The stricter abortion law was backed by prominent members of the Roman Catholic hierarchy, such as the then-archbishop, who was a senior figure in Opus Dei, and by influential business leaders. Earlier this month, Pope Francis said that during the Jubilee year, priests have the capacity to pardon women who have abortions – a significant softening on the issue – but that softening has seen no echo in El Salvador.

There is little appetite among politicians to change the law, because public support for a total ban on abortion is high. In a 2012 public-opinion poll, for example, Salvadorans were asked if an 11-year-old who was raped and impregnated by her uncle should have access to a safe abortion; 76 per cent said no.

"Life is sacred – you don't have the right to kill someone because someone else will suffer," said Carla de la Cayo, president of Yes to Life Foundation, the largest anti-abortion advocacy organization in the country, about denying abortions to women whose lives are threatened by their pregnancies. "We leave this decision to God."

Doris Rivas Galindo, a judge on El Salvador's Supreme Court, says that in her years on the bench she has seen a number of appeals from women convicted for what were clearly miscarriages or stillbirths. Many of the cases that came to her court had poorly prepared forensic evidence, she said, and lawyers on both sides had little idea how to use it. The women prosecuted tend to be poor, illiterate and single, she added, suggesting the law is not fairly applied.

It is difficult to calculate the precise number of clandestine abortions. A recent survey by the Ministry of Health reported 19,290 between 2005 and 2008; the Guttmacher Institute, a U.S.-based organization working on reproductive health issues around the world, estimates 35,000 a year in El Salvador. An estimated 11 per cent of those result in the death of the woman.

Ms. Herrera said she senses a slight softening in public opinion since the Beatriz case, but limited appetite from government to change the law. Dr. Ortiz said that, because of the stigma on the issue, none of his colleagues are willing lobby for reform "just so that we can do our jobs" and offer abortions to women who need them to survive. He still sees Beatriz often – her kidneys are permanently compromised and no transplants are available in the public system here, and she is clearly still traumatized by her ordeal, he said. It is obvious, as he lists off the patients on the floors above his office and the ones who died in the past few months, that he is marked by it, too.

Myrna Ramirez, approaching a year out of jail, is getting to know the daughter born as her nightmare began. "She knows I was in jail but she doesn't know why," she said. "When she's older, I will tell her to be careful – if something like this happens to you, be careful who you ask for help."

Facts & Arguments
I tried to protect my grandchildren from the violence of anti-abortion posters
September 29, 2014 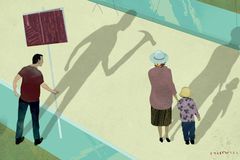