A provocative musical video appeared on Hamas TV this week encouraging suicide bombings of Israeli buses. The unexpected item led to a war of words on social media between Israel and the Islamic resistance movement, further angering Israelis already riled from four months of stabbing and other attacks by Palestinians.

Add to that the fact that Hamas, which controls the besieged Gaza Strip, has once again been constructing numerous tunnels beneath the Gaza-Israel border and people on both sides sense the coming of yet another war.

The video, which shows a young man preparing to attack a bus full of Israelis, features a Lebanese group of singer/dancers. Its message is for Palestinians in the West Bank, from where most of the stabbing assailants come.

The song implores the people to take up the suicide vests that once were worn in the mid-1990s and early 2000s. The translated verse, by Palestinian Media Watch, an Israeli non-governmental organization, goes like this:

"Oh Martyrdom-seeker, make them cry. Make the fire engulf them. Turn them into body parts, roast them, bringing joy to the hearts of the steadfast [Palestinian] people."

Although Israeli Prime Minister Benjamin Netanyahu has repeatedly condemned incitement in Palestinian media, the appearance of this especially inflammatory video surprised a lot of people.

It has been a decade since the last Hamas suicide bombing took place. The group's then-new leader, Khaled Meshaal, had outlawed such attacks in 2005, reasoning that they do the Palestinian cause more harm than good.

Hamas followers have abided by that ruling ever since. Not even the steep body counts of the Israel-Hamas conflict in the winter of 2008-09, nor the more deadly war in the summer of 2014, triggered any suicide bombings in response.

Not any more, it appears. This video, uplifted to various social media platforms, signals a fundamental change at the top of Hamas and in the direction the movement is taking.

"That video was no surprise at all," said Gershon Baskin, an Israeli with close ties to Hamas. "Things are changing inside Hamas. There's a whole new leadership in Gaza.

"The political wing does not control Hamas any more," explained Mr. Baskin, who negotiated between Israel and Hamas for the release in 2011 of the kidnapped Israeli soldier Gilad Shalit. "Three or four people at the top of the al Qassam Brigade are running the show," he said in a reference to the organization's military wing. "And they are preparing for another war."

Hamas officials in Gaza deny this suicide video signals a change in Hamas's position. Ghazi Hamad, Deputy Foreign Minister in the Hamas authority, insisted in an interview conducted through a Globe and Mail interpreter that "Hamas's point of view is very clear – we do not want to go to war.

"It was a political decision," he explained, not to carry out suicide bombings; "not a military decision … and everyone obeys it."

Interestingly, on Sunday, the day the video appeared on Hamas's Al Aqsa TV, Hamas political leaders led by Qatar-based Mr. Meshaal met in Doha with representatives of the Palestinian Authority of Mahmoud Abbas that controls the West Bank. They discussed the on-again-off-again process of reconciliation between the two rival organizations.

In an attempt to deal with one particularly thorny issue, the two sides reportedly agreed that Mr. Abbas's Presidential Guard would take charge of the important Rafah crossing between Gaza and Egypt, while Hamas staff would continue to work there as well.

"Al Qassam completely rejects this idea," Mr. Baskin said. "They'll never allow it to be implemented. They're not at all interested in reconciling with Abbas."

Hamas militants and Fatah fighters fought an ugly battle for control of Gaza in 2007, one in which "kneecapping" was the norm and fighters on each side threw fighters from the other side off the top of buildings. Almost nine years later, the hatred still runs deep.

The Israel Defence Forces (IDF) let its disgust for the suicide video be known on Wednesday when its spokesman used Twitter to quote the song and wondered why Hamas would produce such a thing.

"Because it is the only language you understand, idiots … !" came the swift reply from al Qassam.

Mr. Hamad, who is part of Hamas's political leadership, dismissed the video as just some media propaganda and insists "Hamas will not let anyone" carry out such an attack.

"I wish that were true," Mr. Baskin said, "but there's a new sheriff in town."

His name is Yahya Sanwar, he said.

Mr. Sanwar, 54, was released from prison in Israel in 2011 as part of the Shalit deal that Mr. Baskin negotiated. A founder of Hamas's military wing in 1988, he was sentenced to life imprisonment the following year for murdering Palestinians who collaborated with Israel. He spent 22 years in jail.

Born in the Khan Younis refugee camp adjacent to a bloc of Israeli settlements known as Gush Katif, Mr. Sanwar grew up hating the Jews who enjoyed luxury on the other side of the razor-wire fence. Since his release, he has re-established himself in Hamas, and is gradually becoming its unofficial but unquestioned leader in Gaza.

"Sanwar is emerging as Hamas's uncompromising new strongman," wrote Avi Issacharoff, one of Israel's most authoritative journalists covering the Palestinians. He is hawkish even within Hamas, opposed to any compromise in its policies regarding the Palestinian Authority and Israel.

The tunnels that burrow under the Israeli border are his weapon of choice. He boasts often of "the surprise" they will one day bring to Israelis. "Today, we are the ones who invade the Israelis," he has said. "They do not invade us."

Tunnels have been a feature of warfare in Gaza since at least the time of Alexander the Great. They have been used, as Gazans used them then, to relieve the siege of the city enforced by Alexander. And they were used by the Greek forces back then to attack the place from within.

Palestinians have used them both for supplies via the tunnels to Sinai in the South, and to attack Israel as they did in the 50-day 2014 conflict.

That year, Israel Defence Forces reported that it "neutralized" 32 tunnels, 14 of which crossed into Israel. On at least four occasions during the conflict, Palestinian militants crossed the border through the tunnels and attacked Israeli soldiers. In an attack outside the Israel kibbutz of Nahal Oz, they killed five Israeli troops, before fleeing back into Gaza.

While Israelis often describe these cross-border passageways as "terror tunnels," fearing their potential attacks on civilian populations, in practice, only Israeli military targets have successfully been attacked.

Nevertheless, the very idea of Hamas fighters surfacing in the middle of a town or kibbutz strikes fear in bordering Israeli communities even greater than their concern about rockets raining down on them.

Last week, Israel's State Comptroller Joseph Shapira delivered a draft report to Israel's defence officials charging that there were "grave deficiencies" in preparedness for the Hamas attack-tunnel threat that presaged the 2014 Gaza war.

Today, even Hamas's political leadership acknowledges that tunnels are being dug again. "It is our right of self-defence," said Mr. Hamad, "to protect ourselves if Israel attacks."

An al Qassam leader known as Abu Hamza told the online magazine Al Monitor recently that, "in any future confrontation, Israelis will be surprised by the strength and solidity of these tunnels, which can withstand Israeli shelling and concussion bombs fired by the Israeli aircraft or tanks."

Earlier this week, it was reported in the Israeli press that Education Minister Naftali Bennett, leader of the right-wing pro-settler Jewish Home party, had demanded in Sunday's cabinet meeting that Israel launch a pre-emptive strike against the tunnels.

Officials in the office of Defence Minister Moshe Yaalon told Israeli media that Mr. Bennett's demand was "childish." Mr. Netanyahu publicly lectured him that such conversations were not held in public.

However, it's not clear who exactly made the issue public in the first place. It could very well be Israel's way of sending a signal to Hamas that it was prepared to attack.

"I do not suggest that anyone test us," Mr. Netanyahu warned.

Hamas's political leadership, to whom Mr. Hamad reports, says it wants to maintain the truce that ended the 2014 fighting.

Mark Heller, a senior analyst at the Institute for National Security Studies at Tel Aviv University, said in an interview "there are no overt indications that Hamas is intending to start a new confrontation."

"In fact," he added, "there have been communications from Hamas via Qatar and Turkey that they are not looking for a confrontation."

"But we all know that situation won't last forever."

Indeed, says Mr. Baskin, "Hamas's military leadership have deluded themselves into thinking they can inflict great harm on Israel."

Hamas kills one of its own commanders for unnamed ‘violations’
February 7, 2016 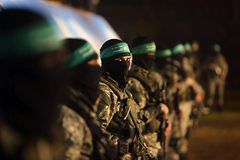 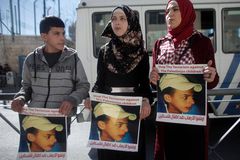