They came starting Monday afternoon, armed with blankets and folding chairs, water bottles and snacks. Their goal: a few moments with the woman they believe is destined to become the next president of the United States.

There was a sense that something was beginning – but what, exactly? The event on Tuesday morning was billed as the launch of a new book by Hillary Clinton, though many of those on line were certain they were part of something far bigger.

Susan Kellman, a lawyer, had arrived late Monday with her 18-year daughter. By Tuesday morning, both were bleary-eyed after spending the night on the sidewalk. Yet their enthusiasm for Ms. Clinton – a former first lady, senator, presidential hopeful and secretary of state – was undimmed.

"This is the beginning of where we can show support for her," said Ms. Kellman, 55. "She's going to make a great president."

Hard Choices, Ms. Clinton's book about her tenure at the State Department, was released on Tuesday, part of a tightly co-ordinated rollout that includes media appearances, book signings and paid speeches. The operation is a cross between a promotional tour and a nascent political campaign.

For her first stop, the former New York senator chose a Barnes & Noble bookstore in downtown Manhattan. Outside, there was a slight carnival air. An artist painted a portrait of Ms. Clinton in chalk on the sidewalk. Television cameras captured the slow progress of the hundreds of people in line to see her.

Across the street sat a bus sponsored by Ready For Hillary, an outside group supporting an eventual campaign. Volunteers handed out buttons and signs and worked to enlarge the group's mailing list, signing up passersby for future e-mails and text messages.

The enthusiasm on display was matched by a certainty that Ms. Clinton, 66, is indeed running for president in 2016, despite her assertions that her mind is not made up (or, as she puts it in the final pages of her new book: "The time for another hard choice will come soon enough.")

"This isn't a book tour, it's a mega-book tour," said Robert Shrum, a Democratic political consultant who worked on the presidential campaigns of Al Gore and John Kerry. "It's the first phase of the campaign."

If Ms. Clinton decided not to run in the end, Mr. Shrum added, "I would be shocked and the Vice-President would be pleased." Vice-President Joe Biden is also contemplating a bid for president. No presidential candidate is likely to launch an official campaign until after the midterm elections in November.

The launch of the book – Ms. Clinton's third foray as an author – has already supplied a miniature helping of controversy. In an interview with ABC News, Ms. Clinton claimed she and her husband were "dead broke" and "struggling" after Mr. Clinton ended his second term as president, an assertion mocked by critics as out of touch.

Republicans know that Ms. Clinton would be a formidable rival. Six years after her last political campaign, when she lost the Democratic nomination in a bitter contest to Barack Obama, she still inspires devotion.

Emily and Anna Whitney, twin sisters from New Jersey, were in elementary school the last time Ms. Clinton ran for office. In 2016, they'll be voting in their first election. On Tuesday, the 16-year-olds arrived at 5 a.m. to secure their spot in line for the book signing, skipping school "for a good cause."

"She's the possible first woman president of the United States," said Emily Whitney. "Being in front of her will be amazing." Her sister Anna was equally excited. "I'm just going to say 'Hi' and try to take a selfie."

That plan didn't pan out. Attendees were subject to strict rules and security measures: no photographs with Ms. Clinton, no carrying anything other than cell phones and wallets, no handing anything to the author, no personalized autographs.

Ms. Clinton, for her part, appeared cheery and at ease. Wearing a fuschia jacket and a chunky silver necklace, she smiled, laughed, shook hands and chit-chatted. With students, she inquired after their future plans. She urged an actor to break a leg. She offered an effusive greeting to anyone she recognized.

Gabriel Delaney, 21, a college student at the University of Pennsylvania, said he told Ms. Clinton that she was someone who had inspired him to make public service part of his mission in life. She responded by asking his name and telling him to contact a member of her staff. Mr. Delaney left elated.

Despite repeated entreaties, Ms. Clinton maintained a diplomatic silence on her plans. Chris Li, a biology professor, said she told Ms. Clinton, "We support you, we're ready to campaign, go for it!" Ms. Clinton merely thanked her and smiled. 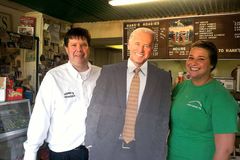