For a monthly fee of $50,000 plus expenses, the U.S. agency offered a tantalizing prospect to the Rwandan government: a burnished image, a sophisticated media campaign – and a chance at "drowning out" those pesky opposition voices on the Web.

It was 2009, and the authoritarian regime in Rwanda was facing mounting criticism of its human-rights record. It was accused of censoring the media, suppressing freedom, shutting down newspapers and creating a climate of fear. So it turned to a public-relations agency, Racepoint Group, that had already polished the image of Libyan dictator Moammar Gadhafi.

Just two years earlier, Racepoint had charged $167,000 for its role in a campaign to promote Colonel Gadhafi, whom it respectfully referred to as "The Leader." It touted the Libyan strongman as a democrat, a reformer, "an intellectual and philosopher." Compared to this, the Rwanda job would be an easy one.

The contracts reveal the increasingly high-tech tactics of the publicity war between African strongmen and their foreign critics – a war in which many governments are becoming more aggressive and sophisticated in their efforts to deflect attention from their human-rights abuses.

Over a period of 18 months, Racepoint created two pro-Rwanda websites, filled the Internet with positive stories about Rwanda, and promoted a new national "brand" for the country. It later boasted that its campaign generated more than 100 stories a month in newspapers, websites and television networks, while also producing an 11-per-cent reduction in online discussion of Rwanda's genocide in 1994.

Racepoint's publicity blitz on behalf of the Rwandan government, explicitly aimed at "undercutting" foreign critics such as Human Rights Watch, is an increasingly popular tactic among autocratic rulers in Africa and the Middle East. A rising number are spending large sums of money on U.S. and British lobbying firms and public-relations consultants for what critics call "reputation laundering" campaigns.

Racepoint's contracts, and many similar ones in other countries, were quietly disclosed by the firms in their filings with the U.S. government under the Foreign Agents Registration Act, although the contracts were sometimes filed two or three years after they were signed, as the law permits.

The agreement between Racepoint and Rwanda, including a 10-page "strategic plan" for shaping a new image for the country, is one of the most detailed and revealing glimpses of how the industry works. The agreement said the campaign had several aims: providing a new positive "brand" for a country that was previously famous mostly for its 1994 genocide; erecting a "wall of defence" on the Internet to "undercut" and "blunt" the government's critics; and "flooding" the media with stories of Rwanda's economic and social progress.

"Once we have secured agenda-setting stories in the general political and business media, we will propagate the story on the Web," Racepoint said in its agreement with Rwanda. "Eventually this will have the effect of drowning out the opposition and reducing the incidence of genocide-related search dominating the organic search (on the Internet)."

The campaign was aimed at defeating two main groups: Rwandan émigrés in Europe who oppose the current government and human-rights groups that criticize abuses in Rwanda. The agreement, which singles out Human Rights Watch for particular attention, says these groups "advance a story of an unstable Rwanda as a means of continuing to attract donors and wield influence in the region."

Larry Weber, chairman of Racepoint's holding company, W2 Group Inc., said he's sorry if the agreement seemed to target the donors of Human Rights Watch. The goal of the strategic plan, he said, was simply to correct any inaccuracies spread by the rights groups.

"I apologize if it comes across as if we're going after them or their donors," he said in a telephone interview from his company's head office in Boston. "We didn't want to put them out of business."

He also denied that the plan was aimed at "drowning out" the legitimate opposition in Rwanda. It was only aimed at "illegitimate" opponents who were spreading false information, he said.

Mr. Weber said he has "disdain" for anyone who thinks it is morally questionable for him to be promoting Rwanda's rulers. "The campaign was to do nothing but to help them learn how to communicate more aggressively in a world that likes to throw a lot of stones."

As for the Libyan contract, he said Col. Gadhafi was "not a good man" in the end, but he noted that at the time of the public-relations contract in 2007 the West was improving its diplomatic and business relations with Libya.

Racepoint stopped working for Rwanda about a year ago, but Rwanda has hired other U.S. and British agencies too. The head of one British agency, BTP Advisers, boasted of setting up an Internet "attack site" where the Rwandan government could target its critics, according to a report last month by the Bureau of Investigative Journalism, an independent non-profit news organization.

"The Rwandan government is obsessed with its image, and it's very intolerant of criticism of its human-rights record," says Carina Tertsakian, a senior researcher at Human Rights Watch.

The hiring of U.S. and British agencies is "one more tool" in an aggressive public-relations strategy that is "often quite nasty and personalized," said Ms. Tertsakian, who has been personally attacked herself on Rwandan government websites.

Thor Halvorssen, president of the New York-based Human Rights Foundation, says too many public-relations agencies are helping African dictators to whitewash their abuses and drown out criticism.

"These companies specialize in burying evidence of human-rights violations deep under rosy language about stability, economic growth and commitments to help the poor," he said.

The price of a better reputation

This oil-rich country with one of Africa's worst records for corruption and human-rights abuses, hired a U.S. consultant, Qorvis Communications, for $60,000 a month in 2010 and 2011 to massage its public image. Its long-time ruler, Teodoro Obiang, who seized power in a military coup, enjoys an estimated fortune of $600-million in a nation where most people survive on less than a dollar a day. He has ruled Equatorial Guinea for 32 years.

Another repressive oil-rich country, Angola, signed an agreement in 2008 with a U.S. company, Samuels International Associates Inc., to improve its global image and "facilitate" its meetings with senior U.S. officials for an annual fee of $675,000. Its autocratic president, José Eduardo dos Santos, has ruled Angola for 32 years.

During his authoritarian rule, ex-president Zine El Abidine Ben Ali signed a $420,000 contract with a U.S. public-relations firm, Washington Media Group, to promote a more favourable image for the country. The firm ended the contract last January after the start of a violent crackdown on pro-democracy protesters. Mr. Ben Ali ruled Tunisia for 23 years until his downfall last year.

Known for arresting hundreds of opposition politicians and repressing the media, the Ethiopian leader, Meles Zenawi, spent more than $2.5-million on three U.S. lobbying firms in 2007 and 2008. Its elections have been widely criticized as unfair and undemocratic, but it is a major recipient of Western aid. Mr. Zenawi, has ruled Ethiopia for 21 years.

When Senegal's president, Abdoulaye Wade, decided last year that he wanted a third term in office, despite a constitutional ban, he signed a contract in October with a U.S. law firm, McKenna Long & Aldridge, promising to pay $150,000 plus a monthly $50,000 fee for the company to prepare a research paper on the third-term question and to "share" the research with U.S. and Senegalese officials. Mr. Wade has ruled Senegal for 12 years. 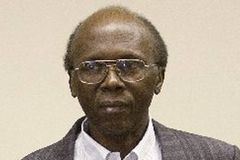