"Did you know?" asks the roadside billboard outside the Hungarian capital, "Brussels plans to settle a whole city's worth of illegal immigrants in Hungary."

The claim is only true if you consider 1,300 people enough to make up a city, but that doesn't deter Prime Minister Viktor Orban's government from making it. Another "Did you know?" billboard – printed in the gold-on-blue colours of the European Union – is even more verifiably false, stating that last year's deadly attacks in Paris were carried out by immigrants, when the perpetrators were in fact all French or Belgian citizens.

The advertising blitz was launched in the run-up to a referendum on Sunday that's expected to see Hungarians resoundingly vote against seeing their country accept its Brussels-mandated share of the million-plus refugees and migrants who have arrived in Europe since last year. The campaign has been called "toxic" and "xenophobic" by Amnesty International, and senior EU politicians have wondered aloud whether Mr. Orban's increasingly authoritarian Hungary still belongs in their union.

But Mr. Orban instead sees a "cultural counterrevolution" taking place in Europe in response to the EU's mishandling of the refugee crisis over the past 12 months. Europeans, he believes, are reclaiming their "historic, religious and national identity" from liberal politicians who have diluted the continent's culture with open-door policies toward refugees and migrants from the Middle East and elsewhere.

With far-right candidates on the rise from France to Austria (the openly anti-Semitic Jobbik movement lies to the right of Mr. Orban's Fidesz party on Hungary's own political spectrum), the mood in Europe is turning fast against refugees, and the politicians who welcomed them.

German Chancellor Angela Merkel, whose championing of her country's "welcome culture" drew hundreds of thousands of asylum-seekers to Germany from Syria, Iraq and beyond, received an early verdict this month when her Christian Democratic Union saw its support shrink – and that of the far-right Alternative for Germany rise – in a series of local elections.

Ms. Merkel has since said she wished she could "turn back time" to ensure the country was better prepared for the consequences of opening its borders to hundreds of thousands of mainly Muslim immigrants.

Now, Mr. Orban, who stood almost alone last year in criticizing Europe's embrace of the newcomers, awaits something like vindication. Polls suggest that three-quarters or more of Hungarians will vote No in Sunday's referendum.

Some Hungarians have undoubtedly been influenced by the government's ad campaign, as well as the leading nature of the ballot question ("Do you want the European Union to be able to mandate the obligatory resettlement of non-Hungarian citizens into Hungary even without the approval of the National Assembly?"). But many will be voting on genuine conviction that this nearly homogeneous state doesn't need an influx of newcomers from different cultures and faiths.

"The question is formed in a way that you wouldn't want to say Yes to it … [but] the majority do not want immigrants as part of society," said Kornelia Magyar, director of the Progressive Institute, a Budapest think tank.

The 1,300 would be Hungary's share of the first 160,000 arrivals who have been approved by the EU as genuine refugees. Others would follow as more cases are processed.

The EU's policy is actually designed to help Hungary, Italy and Greece, the three points of first arrival to the EU that received disproportionate shares of refugee applications. Under the program, 54,000 of the 175,000 new arrivals who applied for refugee status in Hungary since last year would eventually be transferred to other EU countries.

But Mr. Orban's government would prefer to pursue its own course. So far, Hungarian courts have approved just 15 per cent of asylum cases, by far the lowest rate of any country in Europe. Few of those approved in Hungary are expected to stay in the country long-term, with most anticipating a move to other EU countries once their residency status has been secured.

Since the beginning of the crisis last year, Mr. Orban's government has made Hungary an outlier. As refugees and other migrants marched north toward more welcoming Germany, Austria and Sweden last fall, Hungary erected razor-wire fences along its borders with Serbia and Croatia, eventually forcing refugees to go around the country.

Last week, Mr. Orban suggested the EU should build a massive refugee camp – either on an island or "somewhere in North Africa" – and that all those who came to Europe illegally should be transferred there until their asylum applications were processed. "Those who came illegally, they must be rounded up and shipped out," he told a Hungarian news website.

"Hungary is not far away from issuing orders to open fire on refugees," Jean Asselborn, the foreign minister of Luxembourg, said earlier this month. He suggested that Hungary should be excluded temporarily or even permanently from the EU in order to "protect the cohesion and values of the European Union."

Amnesty International said it had interviewed asylum-seekers in Hungary that had been "beaten, kicked and chased by dogs." Amnesty's director for Europe, John Dalhuisen, accused Mr. Orban of overseeing "an ever more disturbing pattern of attacks on [refugees] and the international safeguards designed to protect them."

Such criticisms are unlikely to sway Hungarian voters ahead of Sunday's referendum, which will almost certainly be interpreted as a mandate for Mr. Orban to keep doing what he's doing. 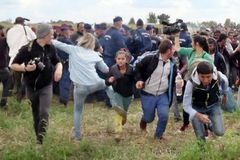