In the 1980s, it was Afghanistan to which international Islamic fighters came, helping the mujahedeen successfully take on the Soviet army and its puppet regime in Kabul. Then came Bosnia in the 1990s and Iraq in the 2000s, in both of which veteran jihadists fought a sectarian war on behalf of outgunned Sunni minorities.In 2012, they're flocking to Syria.

With funding from private organizations in Saudi Arabia, Iraq and Kuwait, they are making their way across the frontiers from Iraq and Jordan, hooking up with opposition elements in Syria and taking the battle to Damascus and the heart of the regime of President Bashar al-Assad.

Money from Qatar is helping finance the Syrian Muslim Brotherhood and the fledgling Free Syrian Army (FSA). And United States CIA operatives are reportedly helping distribute weapons and matériel to the mainstream opposition forces. However, the international jihadists, many of them so-called Salafists linked to al-Qaeda, have agendas of their own that don't stop at forcing Mr. al-Assad from office. To them, the real target is Shiism, the religion of Iran, and the crescent of Shia forces that Tehran has promoted that stretch from Iran to the Mediterranean.

Many Sunni Muslims, and certainly Salafi jihadists, view Shia Muslims as heretical and the Alawite sect of Shiism, (the sect to which the al-Assads and many other powerful Syrians belong) as positively diabolical. As such, it is not out of the question that ethnic massacres of Alawites would take place in the aftermath of an Islamist victory in Syria. To escape such a fate, many Alawites would take refuge in the sect's heartland in the northwest of the country where the al-Assads have built up defences.

"Unless Assad can hold out in the northwest, the Alawites will have little role in a post-Assad Syria," says Barry Rubin, an Israeli analyst and author of The Truth About Syria.

The thought that outside jihadists could dominate the country's agenda following the Assad regime's demise even worries the FSA, said a former senior Syrian official this week.

Should Sunni Islamists take power in Damascus, Hezbollah, the Iranian-backed Shia political movement and militia in neighbouring Lebanon, will be the next target. With the loss of the Assad regime that has been the group's No. 1 arms supplier, and with a new regime favouring the Sunni powers in Lebanon, it will be a challenge for Hezbollah to maintain its position of strength.

After that, the Saudi-backed jihadists will look east, to Iran and its ruling Shia interests in the oil-rich Iraq that sits between Syria and Iran.

In the case of both Lebanon and Iraq, Syria, caught up in post-revolutionary chaos, will be an ideal staging ground for jihadist operations against Iran and its Shia interests.

"We're looking at a region-wide schism between Sunni and Shia," says Alastair Crooke, a former MI6 operative and author of Resistance: The Essence of the Islamist Revolution, "and the ultimate battle for supremacy will almost certainly be in Iraq."

The sectarian fighting that wreaked Iraq in the wake of the U.S.-led invasion nine years ago will pale in comparison to what is to come, says Mr. Crooke. Al-Qaeda of Mesopotamia, the group once led by the late Abu Musab al-Zarqawi, is alive and well in Iraq, and attacks on various groups of unarmed Shia pilgrims earlier this year are just a taste of what may follow an Islamist victory in Damascus.

For its part, neighbouring Israel, to the south of Syria, has already become worried about jihadists on the Syrian frontier.

Israel's military intelligence chief, Major General Aviv Kochavi, told a parliamentary committee this week that Islamic militants have taken advantage of the chaos created by the Syrian civil war and moved into the southern part of Syria adjacent to the Golan Heights.

Israel captured the heights in the 1967 Six-Day War and has occupied them ever since.

The intelligence chief told Israeli lawmakers that a power vacuum may create an opportunity for staging anti-Israel operations, such as those recently carried out from Egypt's Sinai desert.

"The Golan area is liable to become an arena of operations against Israel in much the same way the Sinai is today, and that's a result of the increasing entrenchment of global jihad in Syria," Gen. Kochavi said. 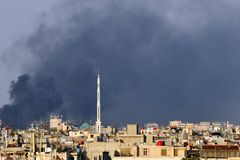 In wake of blast, Syrian forces strike back at rebels
July 19, 2012 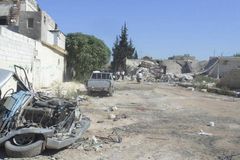