In the middle-class kitchens of Chile, it is women from Peru who wash the dishes. The men who pick fruit in the vast agro-estates in Chilean valleys are Bolivians. And many of the men who chip copper from its mountains are Colombians.

The acceleration of Latin America's largest economies has created an unprecedented flow of economic migration on the continent, pulling workers, both highly skilled and those seeking manual labour, from its poorest countries to its richest.

But there is a near-total absence of legislation designed to facilitate and support that migration in the pull countries, leaving hundreds of thousands of workers – and major employers in the agriculture, mining and service industries – operating in a complicated, often risky grey area.

In Brazil, the continental powerhouse, the number of foreigners in the country increased by 50 per cent in just two years, from 2010 to 2012. And in Chile, the number of immigrants increased threefold in the past 10 years – with half of the entrants coming from Peru, followed by Colombians and Bolivians.

Chile is the first-choice destination for many Spanish-speaking migrants because work in Brazil requires knowledge of Portuguese. Chilean employers are delighted to have the guest workers because a recent surge in standards of living has left even low-income Chileans uninterested in jobs doing agricultural labour or domestic work. The mining and forestry sectors need them too. At the same time, an acute shortage of skilled labour (as there is in Brazil) is drawing professionals, particularly young Europeans facing unemployment due to the economic crises in Spain, Portugal and Italy.

But in both Chile and Brazil, the immigration law dates from the era of military dictatorship, when the main focus was keeping people out. The existing immigration system is opaque and bureaucratic. It makes life complicated for employers, and often nearly impossible for migrants, at least those who try to operate legally.

"Fundamentally Chile does not have migration policy in place – the law records exits and entries from the country, that's it," said Idenilso Bortolotto, who heads the Chilean Catholic Institute for Migration, known by its Spanish acronym INCAMI. His is one of the sole institutions offering any support to migrants; the government gives none. "There are no programs for orientation, for employment assistance, for cultural integration or language training. And recently because of that lack of policy and education, you're seeing negative reactions – the racism, the xenophobia."

In the mining town of Antofagasta in northern Chile, for example, there were demonstrations against Colombians last month, with organizers denouncing a "Colombian invasion" and trafficking in stereotypes about Colombians being tied to the drug trade.

"There's a lot of xenophobia here – especially towards Colombians. It's not a fear thing – 'they're taking our jobs.' It's just a basic mistrust of people who are different," said Raul Paiba, the head of a community organization that tries to assist low-income migrants. All Colombians are seen as being narcotraffickers, all Haitian and Dominican women are seen as sex workers, he said. Haiti and the Dominican Republic are two of the fastest-growing source countries for Chile. All black immigrants are viewed with some level of alarm, he added, in this traditionally all-white country that doesn't have the slave-descended population found along the eastern coast of Latin America.

There is no program for the public at large, or in schools, to promote the idea of the value of diversity, which is hard even for those who can blend in more easily, said Father Bortolotto. "Yes, most of our immigrants are from this region and they speak the same language – but they are not from the same cultures," he said.

Brazil has received 25,000 Haitian immigrants since the 2010 earthquake, through a special humanitarian visa program for those who want to work and send remittances home. Such work-arounds are the only way to manage the existing influx of immigrants the existing isolationist legislation, said Rosita Milesi, a member of the Brazilian government's National Immigration Council. But even the new law being considered, slowly, by Congress fails to take into consideration critical issues such as the fact that migrants from Pakistan, Somalia, Haiti or Angola have no knowledge or access to labour law and are easily exploited.

Chile, as a member of the Mercosur regional trade bloc and a signatory to the Trans-Pacific Partnership trade treaty, is supposed to have open borders, at least to its partner countries. In practice, admission to the country remains entirely discretionary, said Jorge Martinez Pizarro, a migration expert at the Santiago-based Latin American and Caribbean Centre for Demography.

Today some immigrants to Chile or Brazil come in on tourist visas and then attempt to regularize their status when they find an employer to sponsor them. Others just stay on past expiration and work illegally. Then they lack access to the public health and education systems. In Chile, they cannot rent accommodation because they lack a national identification number. Some employers try to turn a blind eye; others jump through hoops to try to regularize. It can take nearly as long to get the paperwork done as the duration of the visa.

And because border entry is discretionary – and depends on the whims of an agent – many people resort to "coyotes" or people-smugglers to take them across. Father Bortolotto said Chile has become a significant human-trafficking destination.

There is little political will to enact reform in either magnet country, he said, but the growing business appetite for workers may be the impetus required.

Any new law has to have a focus on the rights of immigrants, Mr. Martinez said. "It's commonly thought that we should bring people who can make a contribution or fill in gaps that local manpower cannot … But itleaves out two realities: It's based on the notion that everyone comes here to work, which leaves out families and children, and it forgets that many immigrants work as servants, which is almost outside the definition of the work force."

Mr. Paiba said his organization sees a steady tide of Peruvian maids whose employers make them work seven days a week, certain they won't quit or go to the police because they don't have papers.

Michelle Bachelet, elected to a second term as Chile's president in on Dec. 15, may push legal reform because she favours regional integration. "Canada's support for migration could be applied here," Mr. Paiba said. "It requires changing the mindset that immigrants are a problem, but are an opportunity." 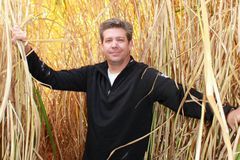 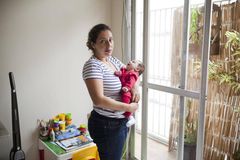 Pride in the Andes: How the fight for gay rights is changing Chile
November 27, 2013 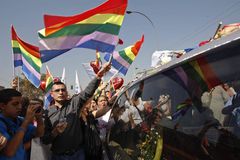 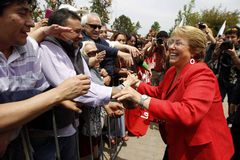