On Feb. 19, 2016, at a campaign rally in North Charleston, South Carolina, then-candidate Donald Trump gave a stump speech in which he railed against American jobs moving to Mexico: "We lose our jobs, we close our factories, Mexico gets all of the work," he said. "We get nothing."

That same day a law firm in Mexico City quietly filed on behalf of his company for trademarks on his name that would authorize the Trump brand, should it choose, to set up shop in a country with which he has sparred over trade, migration and the planned border wall.

The Trump trademarks have now been granted by the Mexican Institute of Industrial Property, or IMPI for its initials in Spanish. Records show the last three were approved Feb. 21, just over a month after Trump took office, and a fourth was granted last Oct. 6, about a month before the U.S. election.

Trump's company has notched several trademark wins recently. The Associated Press reported Wednesday that the Chinese government recently granted preliminary approval for 38 trademarks to Trump and a related company. That sparked outrage from some Democratic senators and critics, who have been pushing Trump to sever financial ties with his global businesses to avoid potential violations of the emoluments clause of the U.S. Constitution, which bars federal officials from accepting anything of value from foreign governments unless approved by Congress.

The Mexican trademarks cover a broad range of business operations that can roughly be broken down into construction; construction materials; hotels, hospitality and tourism; and real estate, financial services and insurance. They are all valid through 2026.

The same four trademarks were previously held in the name of Donald J. Trump and expired in 2015, a year before the new applications. The new approvals list the trademark owner as the company DTTM Operations LLC, with an address in the Trump Tower on Fifth Avenue in New York.

As president Trump has handed management of his business to his two adult sons and vowed to strike no new deals abroad while he is in office. However critics say questions remain about possible conflicts of interest, noting that foreigners could still seek to influence Trump by helping his existing foreign operations or by easing the way for future ones after he leaves the Oval Office.

Trump Organization General Counsel Alan Garten said the Mexican government's decision was not a special favour to the president.

"We're not being granted anything we didn't have before," he said. The original trademarks came "years before (Trump) even announced his candidacy."

Garten said the Mexican trademarks originally had two purposes: laying the ground for possible new ventures and keeping other people from using Trump's name for their own businesses.

He said the trademarks are wholly defensive now.

"Circumstances have changed," Garten said. "He's been elected and we agreed not to do foreign deals."

Richard Painter, the chief White House ethics lawyer under George W. Bush, said the Mexican grants are in an ethical "grey" area: defensive in nature now, perhaps, but setting the president up to profit when he leaves office.

"To what extent is this appropriate? I don't know," Painter said. "We never had Obama running around the world locking up his name, or Bush."

Intellectual property lawyer Enrique Alberto Diaz Mucharraz is listed on the trademark filings. A junior partner at the Mexico City law firm Goodrich Riquelme y Asociados, he declined to comment citing client confidentiality rules. Phones rang unanswered at the public relations office of IMPI, and there was no response to an emailed request for comment on a list of questions.

Mexican political analyst Alejandro Hope said IMPI is generally considered to be apolitical and the trademark concession was most likely a technical decision.

More remarkable, Hope said, was that the application was filed during a heated campaign when "he had already started using Mexico as a pinata" for political purposes.

"What I find striking is that these guys were thinking about doing business in Mexico while they were trashing Mexico on the campaign trail," Hope added.

Trump has a spotty business past in the country.

Last decade he and his children aggressively promoted a luxury hotel and condo development with the Trump name on it that was planned for the northern Baja California coast, near Tijuana. In December 2006, 188 units were sold for $122 million during an event at a hotel in San Diego.

But the Trump Ocean Resort Baja Mexico project collapsed, and dozens of buyers who had lost their 30 per cent deposits sued in March 2009. Trump settled out of court in November 2013 for an undisclosed sum; in a separate settlement the previous year, developer Irongate, which had licensed the Trump name, agreed to pay the buyers $7.25 million.

On the Caribbean island of Cozumel, near Cancun, Trump tried in 2007 to purchase land for a luxury resort complete with an airstrip and golf course, according to Mexican media reports. It met with local and environmental opposition, and never went anywhere.

In all, Trump controls at least 20 trademarks in Mexico, including for Trump Ocean Resort and Trump Isla Cozumel. Others cover activities such as concierge and spa services, alcoholic beverages, golf club operations and home furnishings. For clothing, there's the Donald J. Trump Signature Collection.

If there are plans to take the Trump brand to Mexico, it could be tough going due to widespread popular anger toward the president for his comments disparaging Mexican immigrants who come to the United States illegally, his threats to tear up the North American Free Trade Agreement and his vows to make Mexico pay for the border wall.

Hope said that if a Trump hotel were in the cards, its prospects could depend a lot on location.

"In Mexico City, I guess they would face a lot of political backlash at this point," Hope said. Maybe it would fly in more politically insulated areas, like the beach resorts of Cancun or Los Cabos. "But even that would be a hard sell." 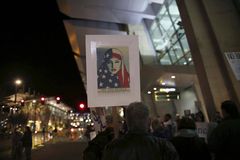