Police in riot gear fired tear gas into a crowd of protesters in a St. Louis suburb where an unarmed black teenager had been fatally shot by police over the weekend. It is the second night of unrest in Ferguson, Mo., a community of 21,000 that's nearly 70 per cent black. Eighteen-year-old Michael Brown was shot multiple times after being confronted by an officer on Saturday.

Ferguson Police Chief Tom Jackson said a large crowd that gathered throughout the day Monday at the site of a burned-out convenience store turned rowdy at nightfall, throwing rocks at police. Officers used tear gas and shot "beanbag rounds" meant to stun them, he said.

There were at least five arrests and no reports of looting.

Jump to a section

FBI launches investigation into civil rights violations
What happened Saturday
What police are saying
What witnesses are saying
Who was Michael Brown?
What happens next
About Ferguson, Mo.
Social reaction: #IfTheyGunnedMeDown

"To sneak around under the cover of darkness, to steal, to loot, to burn down your neighbourhood — this does not require courage," he said. "Courage is when you strive for justice."

"Martin Luther King did not live and die so that we may steal and lie in the middle of the night," he added.

PO caught on camera calling protesters animals. This sentiment toward Black ppl is the start of the police problem! pic.twitter.com/99P5hSG7cZ

The Federal Bureau of Investigations announced it has opened a civil right investigation into the fatal shooting of an unarmed teenager in Ferguson, Mo. on the weekend by a police officer.

Cheryl Mimura, a spokeswoman for the FBI's St. Louis field office, said the bureau is looking into possible civil rights violations arising from the shooting. She also added that the FBI would be investigating this type of a shooting regardless of the public attention surrounding it.

Protesters walked down a main thoroughfare in Ferguson Monday morning, rallying in front of the town's police headquarters, but the crowd of 150 gradually dispersed without incident. 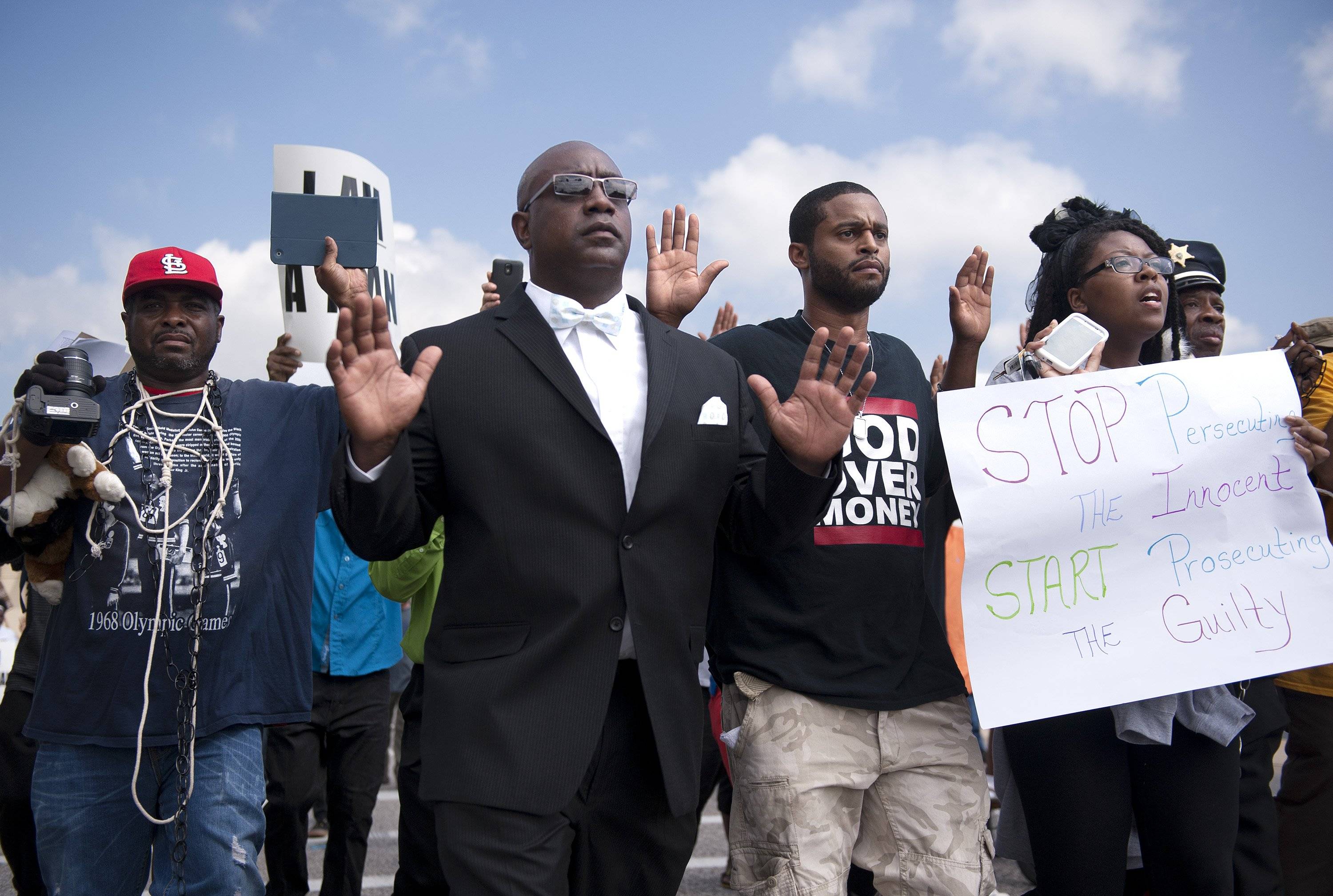 Michael Brown, an 18-year-old from Ferguson, Mo, was shot and killed by police Saturday afternoon. He was unarmed and shot multiple times.

On Sunday, thousands of people attended a vigil in honour of Mr. Brown. After the candlelight gathering, some people broke off from the crowd and looted several stores along a main road not far from the scene of the shooting. They were met by hundreds of police officers in riot gear, carrying rifles and shields, as well as by K-9 units. 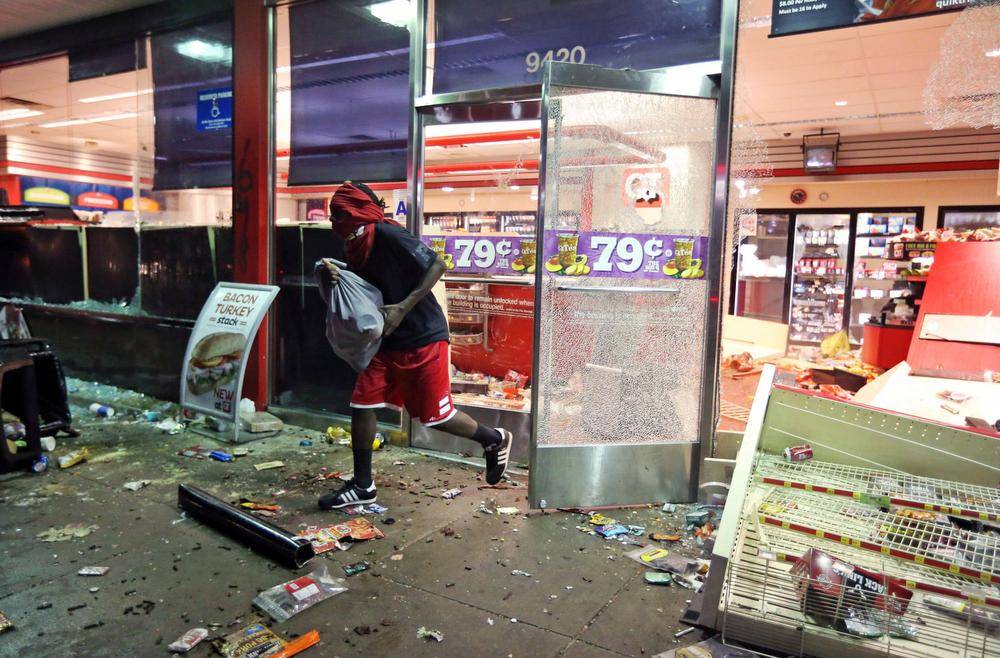 32 people were arrested for various infractions including assault, burglary and theft, authorities said.

The killing is drawing some comparisons to the 2012 shooting of 17-year-old Trayvon Martin, an unarmed African American who was shot and killed by a Florida Neighbourhood Watch member who was later acquitted of murder charges.

What police are saying

According to police, the shooting took place after an officer was physically assaulted by two men he encountered near an apartment complex in Ferguson. As the officer began to leave his vehicle, one of the men pushed the officer back into his car and a struggle occurred over the officer's weapon. At least one shot was fired from inside the officer's vehicle.

After the struggle, the two men left the car and police say that the officer fired several shots at Mr. Brown, who was about 35-feet away from the vehicle.

"The genesis of this was a physical confrontation," St. Louis County Police Chief Jon Belmar told reporters on Sunday.

Several people were angry at the fact that Mr. Brown's body had been left on the street hours after the shooting. Chief Belmar said this was because officers "had to practice our due diligence and that's why it took as long as it did." 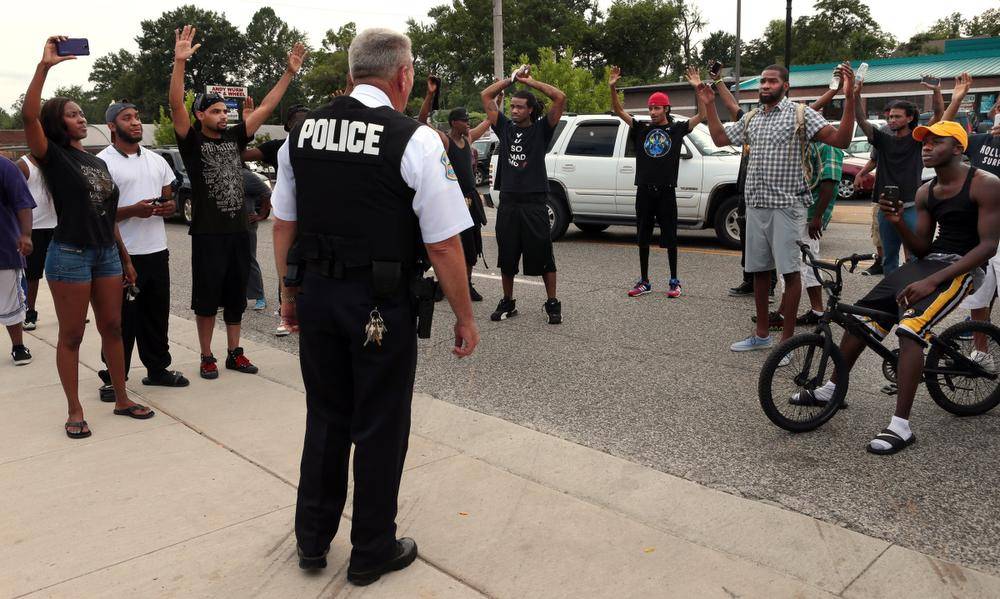 What witnesses are saying

Dorian Johnson told a Georgia television station that he was with Mr. Brown at the time of the shooting and that they were walking home from a convenience store when a police officer told them to get out of the street and onto the sidewalk.

According to Mr. Johnson they kept walking which prompted the officer to confront the pair from his car and then later outside of his car. Mr. Johnson added that he and Mr. Brown ran away from the scene when the officer fired because they were scared.

"He shot again, and once my friend felt that shot, he turned around and put his hands in the air and he started to get down," Johnson said. "But the officer still approached with his weapon drawn and fired several more shots."

"We wasn't causing harm to nobody. We had no weapons on us at all," Johnson told the television station.

According to Fox 2 Now in St. Louis, witnesses say that Mr. Brown was walking in the middle of a street with a friend when the officer arrived.

After the officer ordered them to the sidewalk, a verbal confrontation ensued and the two men told the officer that they were a minute away from their destination and would be out of the street then. The officer then got out of his vehicle and fired a shot.

The two men ran away but Mr. Brown stopped and put his hands up in the air to show that he was unarmed after a second shot was fired.

Who was Michael Brown? 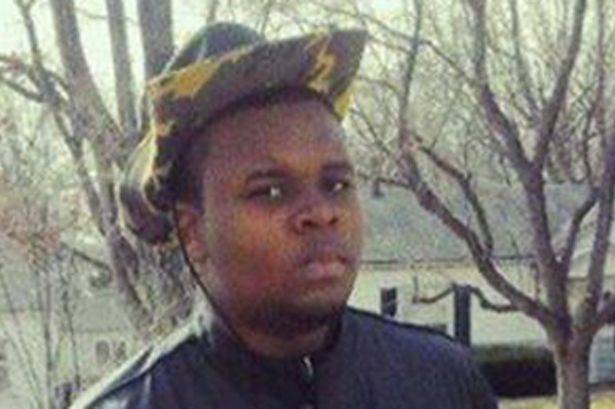 Mr. Brown was an 18-year-old student who had recently graduated from Normandy High School. He was scheduled to start classes at a Missouri trade college Monday.

According to the St. Louis Post-Dispatch Mr. Brown's teachers describe him as a gentle giant who didn't cause trouble, while his friends say he was a quiet person who loved music.

He was reportedly on his way to visit his grandmother at the time he was killed. 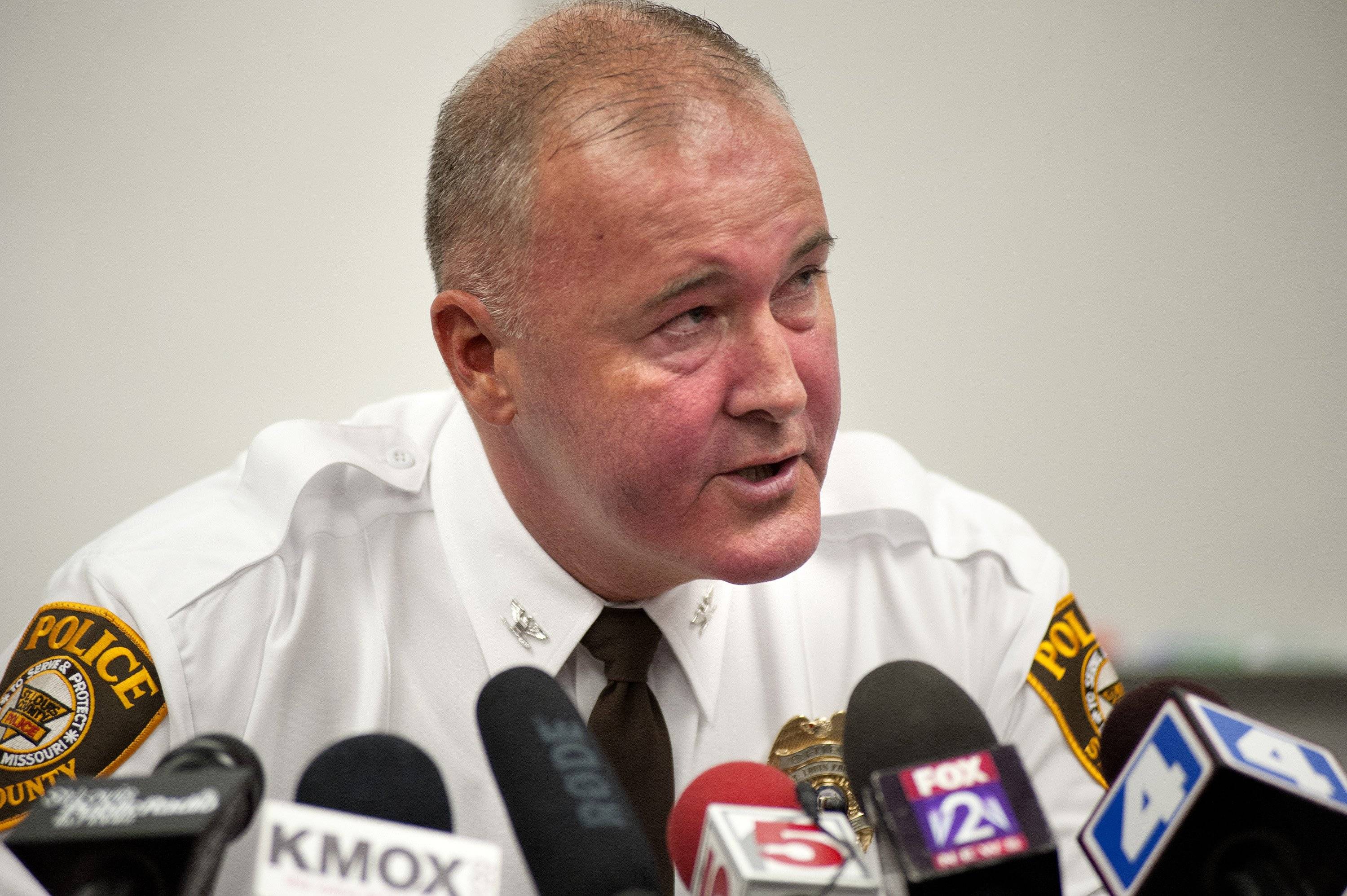 The St. Louis County Police department has been brought in to conduct an investigation looking into the shooting.

Special Agent Cheryl Mimura told the St. Louis Post-Dispatch that "the FBI is working closely with the St Louis County PD to review the matter at this time."

Additionally, the St. Louis Post-Dispatch reported that a spokesperson in Washington said that the Attorney General has asked civil rights lawyers in the Justice Department to monitor the case.

On Monday, the National Association for the Advancement of Colored People (NAACP) said that they will be holding a public hearing in response to Mr. Brown's death.

"It is our hope that this discussion will provide accurate and reliable information to be shared with the community. Our expectation is to educate the public on the NAACP's strategy toward justice for the Brown family and the community. On hand will be a panel of community leaders, attorneys, and other leaders of influence to provide insight on how to heal our community," said Esther Haywood, president of the St. Louis County division of the NAACP, in a press release.

Reverend Al Sharpton, a civil rights activist and the president of the New York based National Action Network, said that he had been contacted by Mr. Brown's grandfather to help the family achieve "a fair investigation and justice."

I am in touch w/ activists in St. Louis about the police killing a 17 year old unarmed youth in Ferguson . From Staten Island to Ferguson.

"I assured him that National Action Network will stand with the family, as we have done for families around the country and assist in any way that we can," he said in a press release.

The officer involved in the shooting is a six-year veteran and has been put on administrative leave, He has not been identified.

Ferguson is a predominantly African-American community within greater St. Louis with slightly more than 21,000 people. Sixty-seven per cent of the city's residents are African-American, according to 2010 United States Census Bureau data, while 29 per cent are white. Additionally, between 2008-2012, it was estimated that 22 per cent of the people living in city are below the poverty line. The median household income during that time was estimated to be slightly more than $37,500 (U.S.) compared to the state's $47,333 median household income.

Since 2000, Missouri's Attorney General has released a report that measures the likelihood that a driver of a given race or ethnic group is stopped based on their proportion of the residential population age 16 and over. Titled the "Disparity Index," it found that in 2013, Ferguson's Police department stopped 5384 motorists, of which 4632 were African-American.

Thousands took to social media to discuss the shooting and riot and subsequent discussions on race relations in America. While some used Twitter to share memories of Mr. Brown, send condolences to his family and friends and discuss their outrage, others used it as a springboard to discuss a number of different social issues that have arisen in the wake of Mr. Brown`s death.

Another conversation prompted by a question from @TheRoot, a Washington D.C.-based digital magazine, takes aim at the media's portrayal of Michael Brown. Early images of the teenager showed him standing in front of a doorway and flashing a gang sign. @TheRoot asked:

Many Twitter users continue to voice their concern and frustration over the picture and are questioning why a more flattering image was not used. The hashtag has been shared more than 160,000 Monday. Some images on the hashtag #IfTheyGunnedMeDown are NSFW.

Here is a selection of some of the images on Twitter.

With reports from the Associated Press and The New York Times