In a dramatic escalation of Zimbabwe's backroom power struggle, President Robert Mugabe has fired his senior vice-president and would-be successor, Emmerson Mnangagwa, for acts of "disloyalty" and "deceit."

The dismissal, announced in a terse statement with little explanation on Monday, has thrown open the door to Mr. Mugabe's outspoken wife, Grace, to become his potential successor.

The sudden firing of Mr. Mnangagwa is a huge victory for Ms. Mugabe, who has been campaigning against him for weeks. She becomes the most powerful politician in Zimbabwe, with the exception of the long-ruling President himself. Her supporters have demanded she be appointed as a vice-president.

Ms. Mugabe is widely disliked in Zimbabwe for her lavish spending – including a $1.35-million (U.S.) diamond ring – and verbal tirades against her enemies. Her detractors call her "Gucci Grace" because of her shopping habits. She recently faced an assault charge in South Africa after allegedly whipping a woman with an extension cord, but escaped prosecution when the South African government invoked diplomatic immunity to protect her.

Ms. Mugabe, a former typing-pool clerk who is 41 years younger than her 93-year-old husband, made an explosive entrance into politics in 2014, when she campaigned ferociously against another vice-president, Joice Mujuru, whom she denounced as a lazy and corrupt extortionist who would repulse even "wild dogs and flies." Within weeks, her husband sacked Ms. Mujuru.

This year, she turned her attention to Mr. Mnangagwa, who had become the presumptive successor to Mr. Mugabe. For months, she has accused the vice-president of disloyalty and mischief-making in the ruling party. "I once warned Mujuru and she didn't heed my advice," she told a political rally in September. "Where is she now?"

At a rally on the weekend, she accused Mr. Mnangagwa of being "the root cause of factionalism" within the ruling party.

Ms. Mugabe became furious when some people at the rally began to heckle and insult her. Some of them chanted "you know nothing" and "you are too junior" when she began to speak. She angrily claimed Mnangagwa supporters paid the hecklers. "I don't care, I am powerful," she told the rally. "Even if I become vice-president, is there anything wrong with that?"

The next day, at another rally, she accused the vice-president of being "the real snake" behind disunity in the ruling party. "The snake must be hit on the head," she said.

"The vice-president has consistently and persistently exhibited traits of disloyalty, disrespect, deceitfulness and unreliability," the minister read from a presidential statement. "He has also demonstrated little probity in the execution of his duties."

Mr. Mnangagwa, nicknamed "Ngwena" (Crocodile), was seen as the leader of a faction in the ruling party known as "Lacoste" – a reference to the green crocodile logo of the French clothing company.

He is a former defence minister and a veteran of the country's liberation battles in the 1960s and 1970s, and is seen as having strong support from Zimbabwe's military leaders. On Monday evening, there was much speculation over whether the military might object to his dismissal, but no visible signs of resistance.

He was a guerrilla fighter as early as 1962 in the British colony of Southern Rhodesia and later fought against white minority rule. He was sentenced to 10 years in prison in 1965 for his role in sabotaging a train and killing a police reservist, and later became an aide to Mr. Mugabe in exile and was appointed to the Mugabe cabinet after independence in 1980.

As head of state security, he played a key role in crushing Mr. Mugabe's opponents in the Matabeleland region in 1982 and 1983, where soldiers massacred civilians. And he helped mobilize soldiers and police for a violent crackdown against the opposition in 2008 to prevent Mr. Mugabe from losing a closely fought election.

Some analysts believed Mr. Mnangagwa was too powerful and indispensable to be removed from his post. But Mr. Mugabe has a history of balancing the factions in his party, preventing any politician from becoming too powerful, and slapping down any rival who seemed to be too ambitious.

For this reason, it is unclear whether he will elevate his wife to a vice-president, where she could consolidate power as his obvious successor. Having removed Mr. Mnangagwa, he might prefer to give the job to a lesser-known politician, while allowing his wife to retain backroom power. 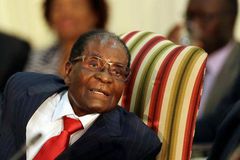 South African model challenges Grace Mugabe's immunity in alleged assault
August 24, 2017
Follow Geoffrey York on Twitter @geoffreyyork
Report an error Editorial code of conduct
Due to technical reasons, we have temporarily removed commenting from our articles. We hope to have this fixed soon. Thank you for your patience. If you are looking to give feedback on our new site, please send it along to feedback@globeandmail.com. If you want to write a letter to the editor, please forward to letters@globeandmail.com.
Comments