As the death toll from Nepal’s earthquake soared past 4,000 on Monday, Canada said it will match donations — dollar-for-dollar — to a fund specifically set up to help people in that country.

How much higher the toll would rise depended largely on the condition of vulnerable mountain villages that rescue workers were still struggling to reach two days after the disaster.

Saturday’s magnitude 7.8 earthquake spread horror from Kathmandu to small villages and to the slopes of Mount Everest, triggering an avalanche that buried part of the base camp packed with foreign climbers preparing to make their summit attempts.

The earthquake was the worst to hit the South Asian nation of 31 million in more than 80 years. It was strong enough to be felt all across parts of India, Bangladesh, China’s region of Tibet and Pakistan. Nepal’s worst recorded earthquake in 1934 measured 8.0 and all but destroyed the cities of Kathmandu, Bhaktapur and Patan.

But an engineer who works on earthquake risks says the 7.8-magnitude temblor that struck on Saturday may not be the Big One for Nepal as immense seismic pressure continues to build up along the Nepal-India border.

“We were expecting an 8-magnitude to happen along the Himalayas, this is not it,” GeoHazards International’s Hari Kumar says. “The stress which was developing west of this earthquake has not been released.” 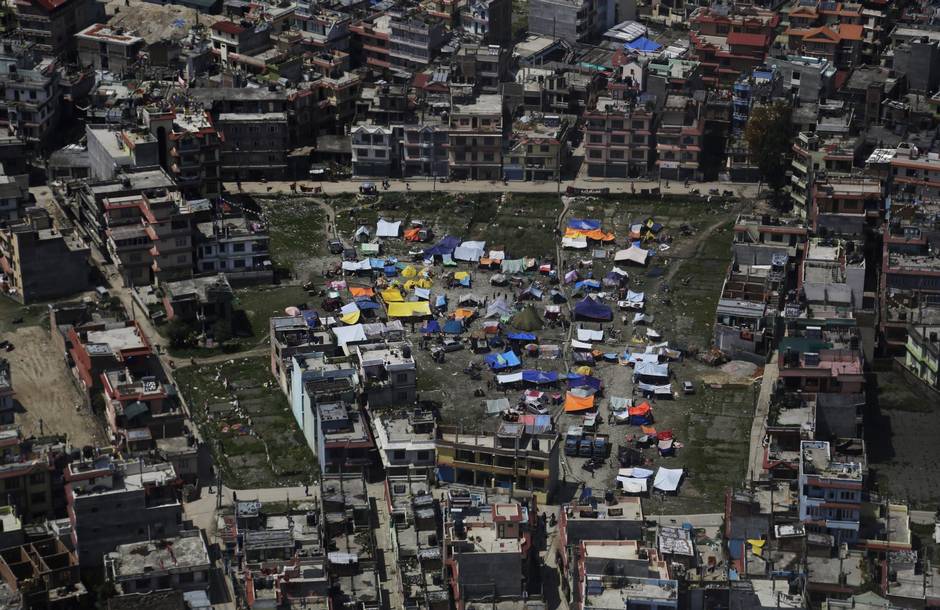 Tens of thousands of families slept outdoors – in parks, open squares and golf courses – for a second night, fearful of aftershocks that have not ceased.

Lila Mani Poudyal, the government’s chief secretary and the rescue co-ordinator, appealed for help from the international community, saying Nepal was short of everything from paramedics to electricity.

“We are appealing for tents, dry goods, blankets, mattresses, and 80 different medicines ... that we desperately need now,” he told reporters. “We don’t have the helicopters that we need or the expertise to rescue the people trapped.”

The recovery situation was also being slowed because many workers — water tanker drivers, electricity company employees, labourers to clear debris — have “all gone to their families and (are) staying with them, refusing to work.”

International aid agency Oxfam says it is gearing up to deliver clean water and sanitation supplies to thousands of Nepalis now left homeless.

“We are managing to reach out to people in Kathmandu, but it is extremely difficult to provide support on a larger scale to the most affected areas,” said Cecilia Keizer, Oxfam country director in Nepal.

Aid workers warned Monday that the situation could be far worse near the epicenter, which the U.S. Geological Survey said is near Lamjung, a district about 80 kilometres northwest of Kathmandu. Even before the quake, it could take six hours to drive from Kathmandu to parts of the area. Now, many of the few roads are believed to be cut off by small landslides.

“There are people who are not getting food and shelter. I’ve had reports of villages where 70 per cent of the houses have been destroyed,” said Udav Prashad Timalsina, the top official for the Gorkha district, near the epicenter of the quake. 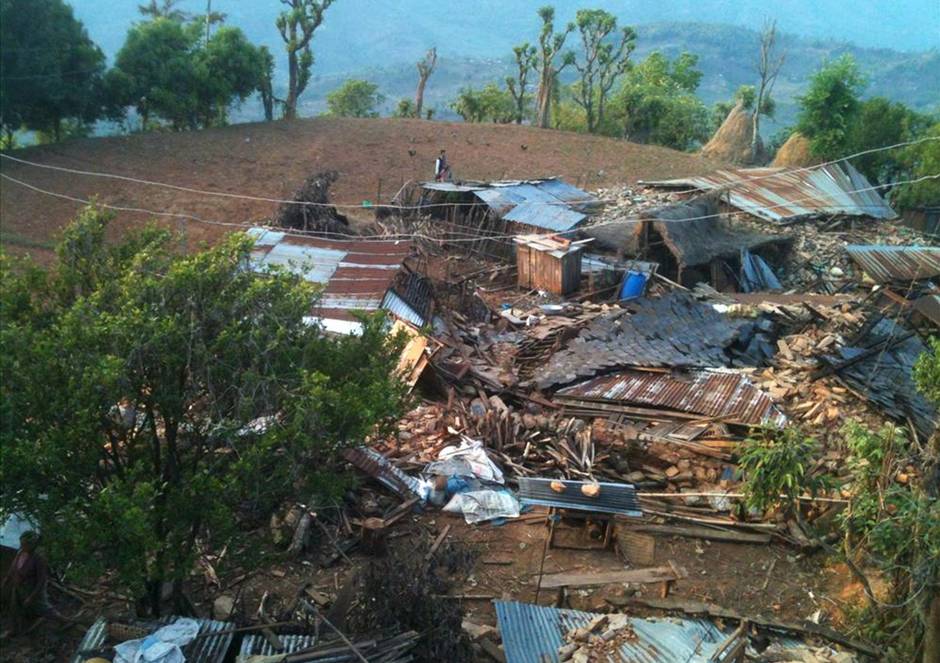 A respected consultancy says the long-term cost of reconstruction in Nepal after Saturday’s earthquake could be more than $5 billion.

“The total long-term cost of reconstruction in Nepal using appropriate building standards for regions vulnerable to severe earthquakes could exceed $5 billion, which is around 20 per cent of Nepal’s GDP,” he says.

Nepal’s annual per capita GDP is only $1,000, and the average family lives in poverty.

“Massive international disaster relief and rescue efforts will be needed urgently, as well as large-scale international financial and technical assistance for long-term reconstruction of the economy,” says Biswas. 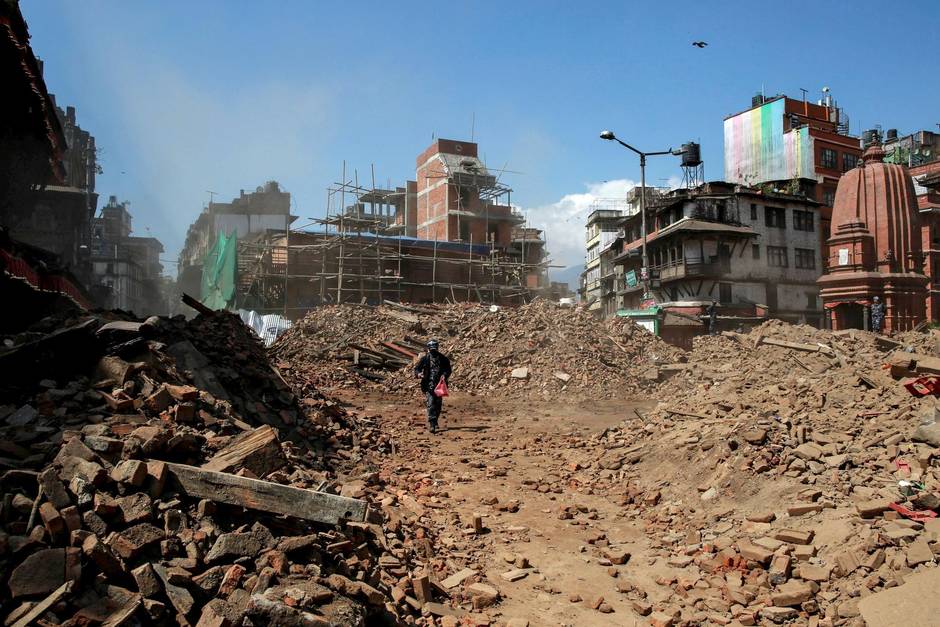 A member of Nepalese police personnel walks amidst the rubble of collapsed buildings, in the aftermath of Saturday's earthquake in Kathmandu, Nepal, April 27, 2015. (Danish Siddiqui/Reuters)

Nepal police say on their Facebook page late Monday evening that 4,010 deaths had been counted in Nepal and 7,180 people were injured.

That does not include the 18 people killed in the avalanche, which were counted by the mountaineering association. Another 61 people were killed in neighbouring India, and China reported 20 people dead in Tibet.

So far 18 people have also been confirmed dead in an avalanche that swept through the Mount Everest base camp in the wake of the earthquake. Another 61 people were killed in neighbouring India.

“90 per cent of the army’s out there working on search and rescue,” he said. “We are focusing our efforts on that, on saving lives.” 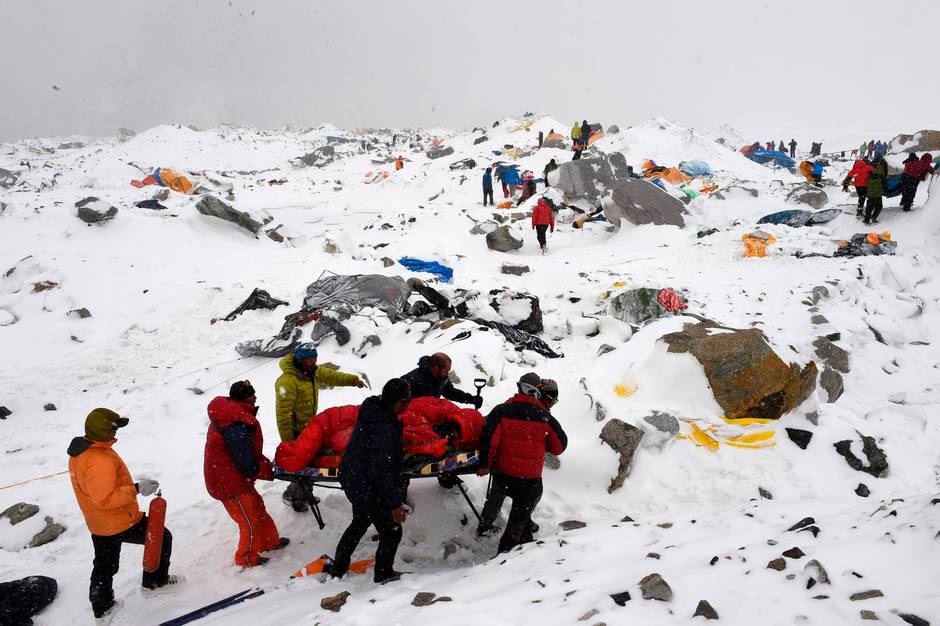 Rescuers use a makeshift stretcher to carry an injured person after an avalanche triggered by an earthquake flattened parts of Everest Base Camp. (Roberto Schmidt/AFP/Getty Images)

French Foreign Minister Laurent Fabius said in a statement broadcast on French TV BFM Monday two French citizens were killed in a landslide triggered by the earthquake. Authorities are still trying to contact 676 French citizens in Nepal. Ten are known to have been injured.

No Canadians were climbing Mount Everest when the earthquake struck, according to information compiled by the Alpine Club of Canada. A Canadian backpacker managed to reach her family by phone Saturday, but has not been heard from since the call was disconnected. Read the full story here.

The U.S. State Department says it is aware of four American citizens who are dead after the earthquake.

The Israeli military said about 150 travellers have yet to establish contact after the earthquake and are believed to be missing.

Australian Foreign Minister Julie Bishop said there are Australians currently unaccounted for" but did not specify how many. 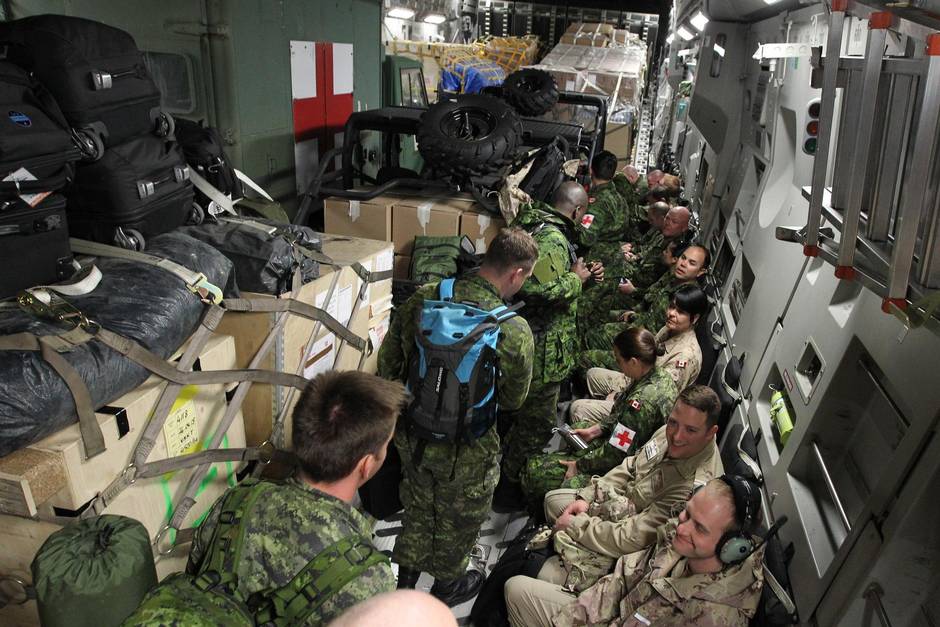 Canada has pledged $5-million toward relief efforts and says it will match all eligible contributions to the Nepal Earthquake Relief Fund, retroactively to when donations first started streaming in on Saturday, until May 25.

The government has also deployed an assessment team from its military DART disaster assistance unit to determine how it might help Nepal cope with the disaster. Twenty firefighters from B.C. are also heading to the region, on a six-day expedition with disaster relief organization Canadian Medical Assistance Teams.

The Pentagon says two teams of U.S. Army Green Beret soldiers happened to be in Nepal when the deadly earthquake struck Saturday and are staying to help with search and relief efforts. A second U.S. Air Force C-17 cargo plane departed Monday from California to transport members of a Los Angeles urban search and rescue team.

Britain, which deployed medics and search and rescue teams to Nepal over the weekend, has announced a $7.5-million package.

Spain’s government planned to send a chartered jet loaded with tons of donated aid from the government and charities, including material to build water storage distribution points and latrines.

Doctors Without Borders is sending eight teams to provide medical aid and other relief in Nepal.

The World Health Organization said it had released $175,000 in funds and appealed for $5-million.

The Asian Development Bank said it was providing a $3-million grant for tents, medical assistance, food and drinking water, plus up to $200 million for recovery efforts.

All mountaineering on the Chinese side of Mount Everest, which is less popular with climbers because a special permit is required to enter Tiber, has been cancelled since Saturday’s earthquake.

Medical and rescue teams from Russia, Japan, France, Switzerland and Singapore were expected to arrive in Kathmandu over the next couple of days, the army said. 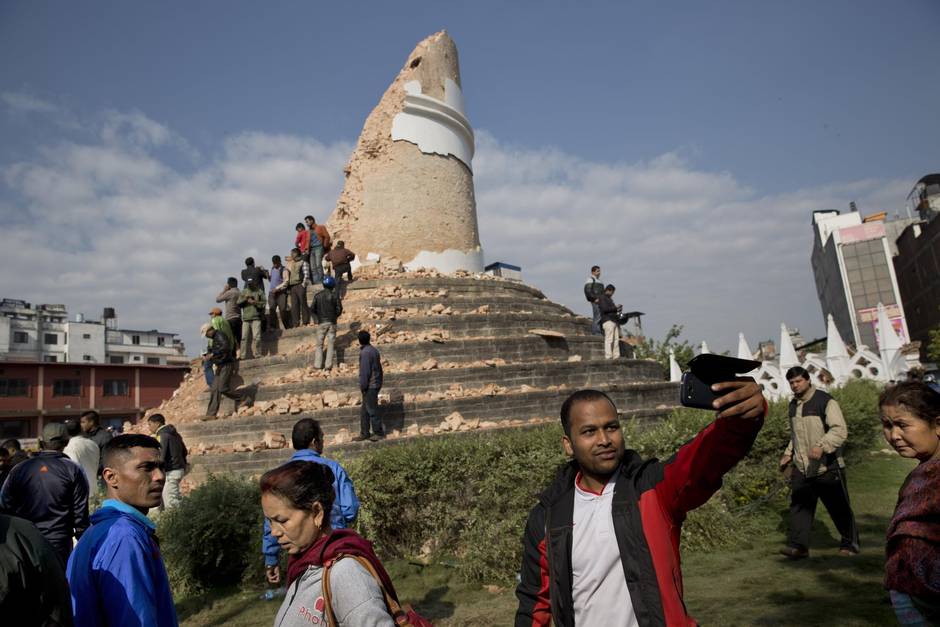 A man takes a selfie at the historic Dharahara Tower, a city landmark, that was damaged in Saturday’s earthquake in Kathmandu, Nepal, Monday, April 27, 2015. (Bernat Armangue/The Associated Press)

The Dharahara Tower, a historic nine-story structure built by Nepal’s royal rulers in the 1800s was one of the country’s most treasured monuments, was reduced to an enormous pile of red brick dust after Saturday’s quake. It is now barraged with the clicking of smartphones.

Pawan Thapa, a 21-year-old business student who arrived from the suburbs to try to help with the recovery effort, was dismayed by the scene. Some of those taking pictures were smiling for the camera.

“This is earthquake tourism. This is not right,” he said. “They are more interested in clicking their selfies than understanding that it is a tragedy.”

Most of those taking pictures, however, did not appear to be tourists but locals capturing the devastation of their community, and the loss of a landmark that had helped define it. 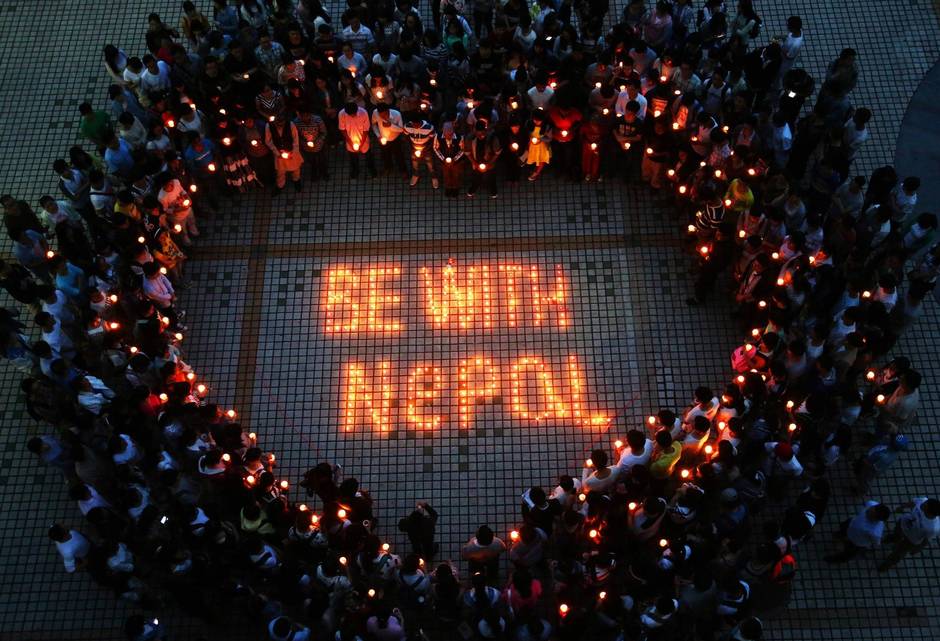 Aid experts have taken to Twitter to urge well-wishers to donate cash to reputable relief groups rather than rushing in unwanted goods or help. Donations can be made to The Canadian Red Cross' Nepal Region Earthquake Fund online at www.redcross.ca or by calling 1-800-418-1111.