Scott Cairns doesn't sleep well when he's in Syria. He stays up worrying about the safety of the team of chemical weapons experts he leads, and the enormous size of the task they face disposing of one of the world's largest arsenals of chemical weapons. "I think too much, and for some reason I seem to do most of it when I should be sleeping," he explains.

The Winnipegger has spent entire nights watching the civil war unfold out his window, beyond the bubble of semi-safety – the Four Seasons hotel in the fortified heart of Damascus – where he and his team from the Organization for the Prohibition of Chemical Weapons (OPCW) spend most of their evenings while in Syria. That insomnia kept the OPCW team leader awake into the early hours of Aug. 21, as explosions lit the sky outside his east-facing hotel room.

He didn't know it at the time, but Mr. Cairns now believes he witnessed – from a distance – the world's worst chemical-weapons attack in a quarter-century. It was part waking dream, part nightmare for the 42-year-old, who has devoted his career to eliminating armaments like the sarin-filled shells that fell that night on the rebel-held Ghouta neighbourhood of Damascus. At least 1,200 people were killed in the attack and videos of the death throes of children were seen around the world, prompting threats of U.S.-led military action and, eventually, an international accord to rid Syria of its chemical weapons.

"The use of the word surreal is not inappropriate. You never imagine that you'd be in a situation where you would in fact witness, and then go to the site of, a potential chemical weapons attack," he told The Globe and Mail this week in his first interview since returning last week from a second nerve-wracking and sleepless deployment to Syria.

The August chemical attack set off a chain of events that Mr. Cairns – who admits few people had previously heard of the OPCW – still finds hard to believe.

Five days later, Mr. Cairns was in a United Nations convoy that came under sniper fire as it tried to cross from a government-held part of Damascus to a rebel-held area. Soon afterward, Mr. Cairns was leading his team of inspectors out of Syria in an unexpected and hasty departure, believing that American air strikes were imminent after U.S. President Barack Obama declared the regime of Bashar al-Assad had to be punished for its apparent use of chemical weapons.

But the OPCW inspectors soon found themselves heading again to Damascus under a Russian-led international agreement that saw the United States and France back away from threats of force in exchange for a Syrian promise to surrender its chemical weapons program for destruction. Mr. Cairns and his team were back in the same Four Seasons hotel on Oct. 11 when the OPCW was announced as the surprise winner of this year's Nobel Peace Prize.

Born in Burlington, Ont., Mr. Cairns describes himself as a "military brat." His father's career as an air force radar technician took the family to bases around the country before they finally made a home in Winnipeg. A voracious reader from a young age – the "thousands" of books on his Kindle device are the only distraction he allows himself when he's in the field – Mr. Cairns also had an aptitude for science, which led him to study chemistry at the University of Manitoba.

After graduating, Mr. Cairns worked surveying natural gas pipelines in Western Canada. He was driving through southern Alberta in the summer of 2001 when his girlfriend of the time called to say she'd spotted a job opening at the chemical and biological weapons research centre at CFB Suffield, 250 km southeast of Calgary, that she thought he might be interested in. Mr. Cairns says he took the call on his mobile phone just as he was driving by a road sign pointing him towards Suffield. Fate, he surmised, was suggesting that he apply.

"It was really more by happenstance," he says of his unconventional career choice. "One doesn't come out of university looking to dabble in chemical weapons."

The job at CFB Suffield – which involved testing chemical and biological agents on the sprawling base, and training Canadian and NATO forces how to react to them – brought him into regular contact with the OPCW, which is notified whenever chemical agents were used. After seven yearsat Suffield, Mr. Cairns, who is now single and jokes that he came to Europe "looking [thus far unsuccessfully] for love" decided he was ready for a move to The Hague and OPCW.

In person, Mr. Cairns is the stereotypical Canadian: soft-spoken to the point of seeming shy, saying he and his team didn't really believe the news when a United Nations press officer told them about the Nobel Peace Prize. There wasn't time to contemplate it, either – they had a facility to inspect in the battle-scarred city of Homs, and the dangers of that trip felt far more real.

Mr. Cairns sticks to the line that the Nobel committee used in announcing the OPCW's win: that the peace prize wasn't to reward or encourage the mission in Syria, but to acknowledge 15 years of the organization's work around the world preventing the proliferation of chemical weapons. But he's proud of what he and his team have accomplished so far in Syria.

The OPCW announced on Nov. 1 that the Syrian government had met the deadline for destroying its facilities for producing and mixing chemical weapons. The government's declared stockpile of just over 1,000 tonnes of agents such as sarin, VX and sulphur mustard has been placed under tamper-proof seals by the OPCW. Both are milestones many believed would be impossible to achieve amid a raging civil war.

"A lot of people now confess, in the aftermath, that they didn't think we'd accomplish half of it. … There was a lot of potential for delays or what some people would call failure," Mr. Cairns said, sitting on Thursday in the lobby of the round OPCW headquarters building in The Hague.

While he qualifies every statement about Syria's chemical weapons program with words like "declared" or "that were disclosed," Mr. Cairns also says much of the credit for what had been achieved so far must go to the Syrian government. "We had very good relations with them. I think, the willingness to co-operate, the willingness to facilitate our activities, has to be recognized."

Massive challenges still lie ahead. The Syrian government is due to present a plan by Nov. 15 laying out how it proposes to get rid of its chemical arsenal. It has until the middle of next year to actually destroy the weapons, which will most likely need to be done somewhere else, though few countries are expected to offer their soil for the purpose. Mr. Cairns and the OPCW will oversee the entire process.

Mr. Cairns, whose tenure at the OPCW comes to a mandatory end next year, says he doesn't know what comes after the Syria assignment for him.

Perhaps another road sign will point the way. It wouldn't be the most surreal thing to happen. 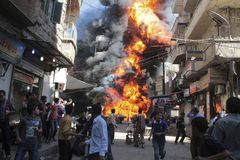 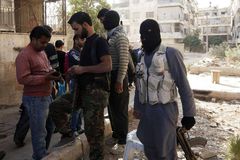