Taxes are too high, competition from medical marijuana too great and the bureaucracy is overwhelmed by the volume of applications -- the perfect recipe for a robust black market 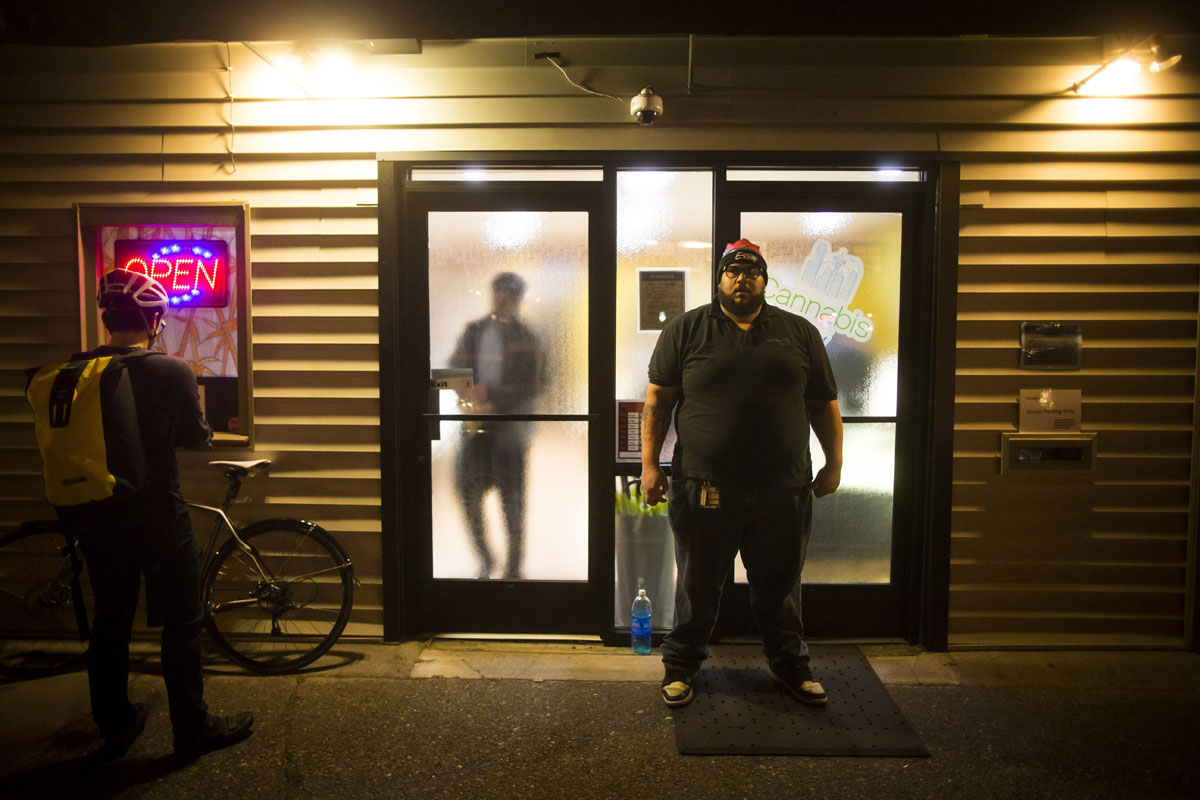 The highs, and lows,
of legal marijuana


It's been nine months since the first outlets opened in Washington State, but as store owners and producers are finding, they're not achieving much of a retail high. As Gary Mason reports, taxes and competition are giving rise to a robust black market

The dope on Washington's dope

Washington State’s Initiative 502 passed in November, 2012, licensing the production, distribution and retail sale of marijuana to anyone over the age of 21. The law also removed state criminal and civil penalties for specific activities, such as the possession and sale of marijuana; established a tax structure on marijuana sales; and established how revenue generated from taxing sales would be spent.

Initiative 502 created three marijuana licences – producer, processor and retailer – and set an application fee of $250 (U.S.) for each licence, with an annual renewal fee of $1,000. The sale of marijuana is regulated by the Washington State Liquor Control Board.

Who can buy marijuana?

How is it taxed and where does the tax money go?

Washington State levies a 25-per-cent tax on producer sales to processors, a 25-per-cent tax on processor sales to retailers and a 25-per-cent tax on retail sales to customers. This tax is in addition to any/all applicable general, state and local sales and use taxes, and is part of the total retail price. The total effective tax rate is to be about 44 per cent. Revenue from taxes collected on the sale of marijuana is deposited in the Dedicated Marijuana Fund and designated for administration costs related to implementing and maintaining the law, health care and substance-abuse prevention and education.

How many states have passed legal marijuana laws?

Amber McGowan surveys the clutch of customers milling around the three counters in her tiny marijuana retail outlet and nods approvingly – pot is hot.

Men and women who appear to be mostly over 50 consider products with names such as Headband, Skunk, Banana Kush and THC Bomb. A five-pack of oatmeal cookies that are nothing like the ones your mother used to make go for $42 (U.S.). Behind a glass enclosure there are bongs of every colour and description. Psychedelic renderings grace the store’s wood-panelled walls.

“I have to say business has been fantastic,” says Ms. McGowan, manager of Cannabis City, the first marijuana store to open in Seattle. “But unfortunately that’s not the whole story.”

Two years after legalizing marijuana, and nine months since the first retail outlets opened, Washington State has encountered more than a few potholes in its bid to regulate and profit from the sale of cannabis. The experience is a cautionary tale for Canadians only six months before an election as they debate the merits of the federal Liberals’ pledge to legalize marijuana across the country.

Far from eliminating the black market, the new, regulated system in Washington State has instead allowed it to thrive. Licensed growers complain of a glut of weed that is driving down their profits.

Store owners, meantime, complain about a tax structure that is too onerous to make decent earnings and is, in many cases, driving potential customers to explore cheaper options such as medical marijuana or the scores of unlicensed pot shops that have sprouted up. The situation is slightly better in Colorado, which legalized cannabis at the same time as Washington State but did not impose as burdensome a tax regime on the drug. That has helped keep prices low and make the black market less appealing.

“We’re one of the top three retailers in the state but to be honest profits aren’t great,” said Ms. McGowan, whose shop is located amid a stretch of low-slung buildings in the southern edge of town. “It’s a new industry so it’s going to take a while before things sort themselves out in terms of what’s the best tax rate, what’s too high, too low, how you ensure that you’re not defeating the whole purpose of this and just fuelling alternative markets, which I think is what’s happening now.”

Randy Simmons, Washington State’s marijuana project director who oversaw the implementation of the legalization program, concedes there are problems that need to be addressed. But generally, he thinks the first few steps the program has taken have been positive.

“Right off the bat we were overwhelmed by the volume of applications we received for retail outlets,” he said in an interview from his office in the state capital of Olympia. “We have just under 100 stores up and running now. Over the next three to four months, we’ll have another 90 stores opening. The marketplace is starting to find us, I think, at just the right time.”

Right off the bat we were overwhelmed by the volume of applications we received for retail outlets
Randy Simmons, Washington State’s marijuana project director

More stores could help meet demand in some corners of the state where no licensed marijuana operations exist now. But that doesn’t solve bigger problems around the current tax rate and competition from the medical marijuana field, which Mr. Simmons also recognizes as a major concern.

On the tax front, this is the challenge: Currently there is a 25-per-cent tax at three levels of the production and sales process – from grower to processor, processor to retailer, retailer to customer. And that’s on top of other state and local taxes that apply. Cumulatively, the effective tax rate is 44 per cent in Washington State, compared with just 29 per cent in Colorado.

In licensed retail outlets such as Cannabis City, pot is selling for between $23 and $25 a gram (U.S). Medical marijuana dispensaries escape the worst of the tax regime. Their product is subject to a meagre 2.9-per-cent sales tax, allowing them to sell pot for a fraction – around $9 a gram – of what licensed state stores are charging. A prescription can be issued by everyone from a nurse practitioner to a naturopath. They are easy to obtain. 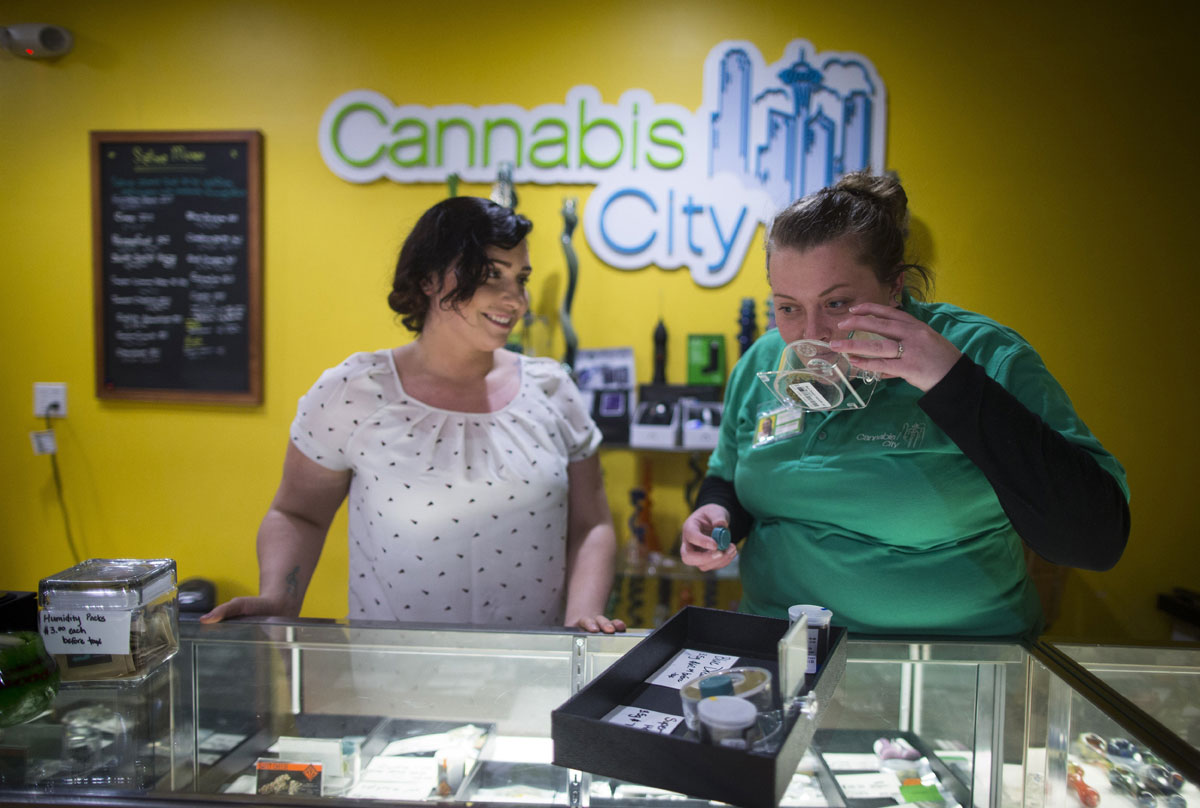 From a policy perspective, lawmakers are wrestling with how to direct people to use state-licensed marijuana stores without penalizing legitimately sick (and often poor) people who use marijuana.

“I wouldn’t say it’s the black market that has exploded but the grey market,” Mr. Simmons said. “We have an unregulated medical dispensary system here and that’s really where we’ve seen the growth [in sales] happen.”

He accepts that the current tax structure around marijuana does not work. That situation is expected to be addressed by state legislators. Mr. Simmons also believes an amendment will be made to existing laws to tax pot at one point in the supply chain, instead of three. Finally, there is a bill before the legislature that would put both medical marijuana and its recreational counterpart under the authority of the same agency – the Washington State Liquor board.

“Several bills before the legislature relate to marijuana and one would combine the two marketplaces (medical and recreational) into one with similar licensing procedures, the same regulations, the same enforcement requirements,” he said. The hoped-for result would be a more competitive cost environment between the two.

The state is also finally cracking down on hundreds of unregulated marijuana businesses that have popped up in the last several months, ones that sell pot free of state taxes. Liquor board investigators are also nabbing unfettered marijuana delivery service operations that have blossomed and are hurting legitimate state-sanctioned cannabis outlets.

We just can’t pay the taxes that are being levied right now. It’s impossible. Things have to change because right now producers are dropping like flies.
Andrew Seitz, general manager of Dutch Brothers Farm

Licensed growers are also unhappy with the current arrangements. The 270 growers outnumber retail outlets three to one. As of the middle of January, the growers had harvested more than 31,000 pounds of pot, but retail stores had sold less than a fifth of that. Virtually all of the growers in the state have surplus inventory. Andrew Seitz, general manager of Dutch Brothers Farm, a commercial grower based in Seattle, says the current conditions for marijuana producers are unsustainable.

He said things were fine initially, when growers were able to sell their crop for about $25 (U.S.) a gram. But because of a glut in supply, that price has fallen as low as $4 a gram for some producers. “My costs are about $4.23 a gram currently. Right now I’m grossing about $70,000 (U.S.) over the four-month growing cycle and that’s between two people and before taxes obviously. So there can’t be any hiccups at all. We just can’t pay the taxes that are being levied right now. It’s impossible. Things have to change because right now producers are dropping like flies.”

Like many, Mr. Seitz says the state needs to address the proliferation of medical marijuana dispensaries that are hurting the entire recreational side of the industry. “Until they grapple with that and get it fixed this whole thing will never work. It’s a joke right now.”

Mr. Simmons believes that the opening of a hundred new stores in the next year should help address the glut of product on the market, which should help producers. The state has revised its revenue projections and now expects to take in about $35-million in the first year ending June 30. In Year 2, that number is expected to climb to $120-million. By 2019, the state predicts it will have taken in more than $690-million in tax revenue from the sale of pot. 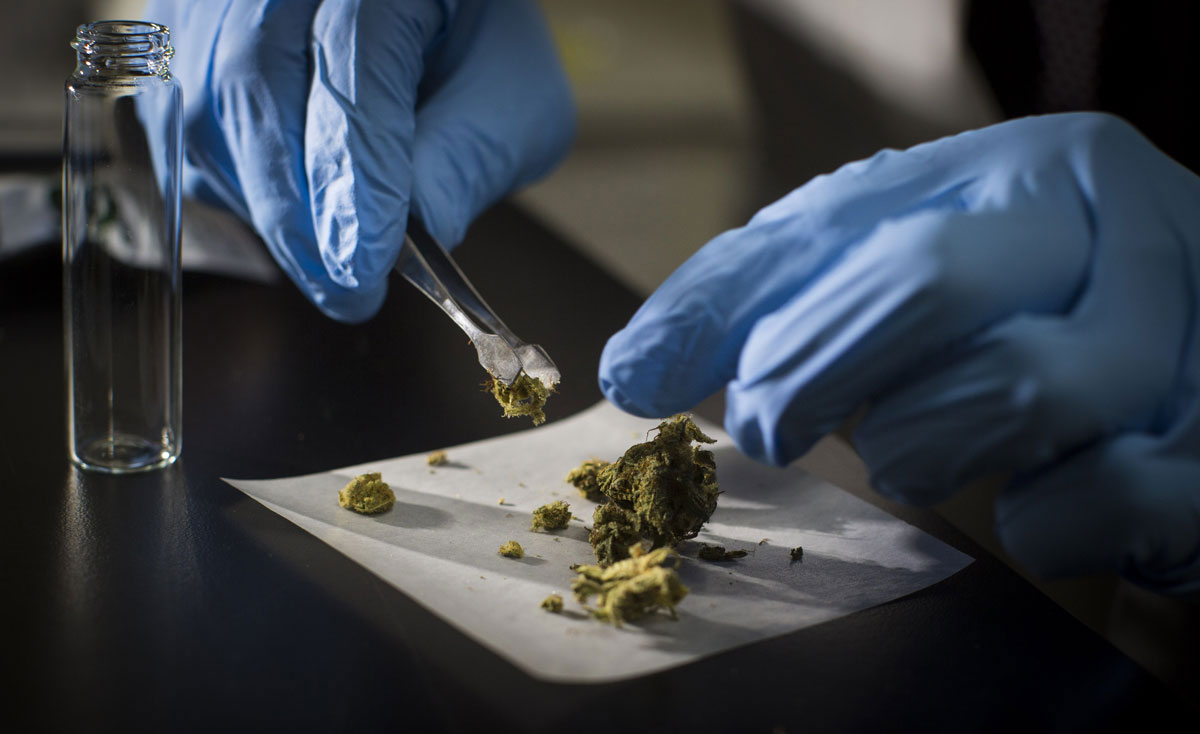 Amber McGowan is putting her faith in the state’s ability to deal with the problems that have emerged on the commercial side of the industry. In particular, she is hoping the current tax scheme is revisited – and soon. Alaska and Oregon have now passed laws legalizing the sale of marijuana and store owners in Washington State are worried they could lose business to their immediate neighbour to the south when pot outlets open for business there in 2016.

“We’re expanding our hours of operation because of demand, so that is a positive,” Ms. McGowan said. “We made an early stamp on the market which has helped. And our location close to downtown has helped with tourists, who form a huge part of our clientele.”

The manager looks at her front door as more people walk through.

“Like I say, nobody’s getting rich but I’m hoping that the industry will become more financially viable in the years ahead. We’re young and it’s all brand new.”

Washington state’s Initiative 502 passed in Nov. 2012 licensing the production, distribution and retail sale of marijuana to anyone over the age of 21. The law also removed state criminal and civil penalties for specific activities, such as the possession and sale of marijuana; established a tax structure on marijuana sales and established how revenue generated from taxing sales would be spent.