Germany was inviting trouble by choosing to host this weekend's Group of 20 summit in Hamburg. Since the violent G7 summit (then the G8) in Genoa in 2001, where thousands of anti-globalization protesters clashed with police, almost all G7 and G20 summits have been held in small towns, where the access roads could be easily blocked. Hamburg may or may not turn into a Genoa, though the street fun has already started and the German police at one point used water cannons to cleanse the protesters of their resolve to express their opinion on globalization and U.S. President Donald Trump.

The bigger question is whether the street mood will, in effect, be replicated inside the G20 meeting rooms, where the temptation to gang up on Mr. Trump might prove overwhelming. Hamburg could turn into the G19+1, just as the May Taormina summit in Sicily turned into the G6+1. In Taormina, Mr. Trump killed off any sense of unity, resulting in a truncated and bland communiqué. Shortly after the summit, he yanked the United States from the Paris climate-change agreement.

Most G7 and G20 summits are useless, in the sense they fail to accomplish anything that leads to the quick resolution of pressing problems (the exception was the string of summits in the 2008 and 2009 crisis years, where central bankers and finance ministers were largely united in their fix-it plans).

But talking shops do have value. They give the leaders a sense of the global dynamic, of what's possible and what's not, of who makes a natural ally and who does not in the shifting geopolitical sands. In this sense, the G20 is far more important than the G7. The G20 represents two-thirds of the global population, three-quarters of economic output and about 80 per cent of the planet-warming greenhouse gas emissions.

The Hamburg event will grind through many issues, from the North Korean missile tests to the migration crisis; they will be sideshows. The biggie will be Mr. Trump vs. Angela Merkel, the German Chancellor and "queen" of the European Union, still the world's biggest common market.

Whose vision on trade and Western values will prevail? Two days ahead of the summit, it was an open question whether Mr. Trump's "America first" pledge would sabotage the summit or Ms. Merkel's liberal views would save it.

Certainly the omens do not bode well for Ms. Merkel, who, as host of the summit, must be busy downgrading her definition of summit success.

In May, H.R. McMaster, Mr. Trump's national security adviser, and Gary Cohn, his economic adviser, essentially put everyone on notice that law of the jungle, not co-operation among sovereign states, would be the Americans' preferred world order.

The duo said in an Wall Street Journal article they saw the world as "an arena" where countries "engage and compete for advantage." Eat or be eaten.

Not to be outdone, Wilbur Ross, the former Wall Street banker turned U.S. Commerce Secretary, delivered a blunt speech by video link in late June to the Economic Council, a German business association that is close to Ms. Merkel's Christian Democrats party. Ms. Merkel herself was at the council meeting.

According to the German news magazine Der Spiegel, Mr. Ross demanded that Germany buy raw materials from the United States instead of Russia, that the United States "obtain a larger share" of the European market and that Europe drop its tariffs on American car imports. If the Europeans refuse to comply, the Trump administration would have no alternative but to "engage in self-help," implying a trade war.

Indeed, the United States is already considering a border-adjustment tax, essentially a value-added tax levied on foreign imports (goods exported from America would be exempt from the tax). Its implementation would upend global trade patterns.

By now, Ms. Merkel and her EU allies – Emmanuel Macron, the new French President, and Italian Prime Minister Paolo Gentiloni – know not to get their hopes up when confronting Mr. Trump. He has retreated on the free-trade and climate-change files. The United States has taken in hardly any Syrian refugees – fewer than 20,000 compared with almost a million by Germany. Mr. Trump and the European NATO countries are at loggerheads over defence spending. Western Europe, especially Germany and Italy, oppose tougher, U.S.-inspired economic sanctions on Russia.

After the dud G7 in Taormina, Ms. Merkel was refreshingly candid in her assessment of the new transatlantic relationship. "We Europeans truly have to take our fate into our own hands," she said.

A big signal that Europe will do exactly that came Thursday, when the EU and Japan announced they were close to signing a free-trade deal even as Mr. Trump pulls back from such deals (one of Mr. Trump's first acts as President was to withdraw from the Trans-Pacific Partnership). Meanwhile, the Canada-EU trade deal, known as CETA, is steaming ahead and Ms. Merkel is trying to keep the Paris climate agreement alive, even if its second-biggest polluter, the United States, has gone AWOL.

Salvaging something from the G20 will be Ms. Merkel's biggest challenge. If she and her allies isolate Mr. Trump, he may, like a schoolyard bully, retaliate. If she cozies up to him, she will alienate her voters, who have little respect for the man and his protectionist agenda. The problem is that the mushy middle ground will do little to make the G20 a success, or preserve her liberal vision on how the Western world should operate.

Trump and Putin finally meet on Friday. What will they talk about? A primer
November 12, 2017 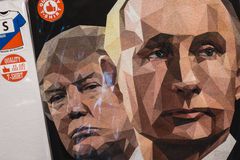