If and when Greek Prime Minister Alexis Tsipras takes a break from rattling the current world order this week, he's expected to fly to a place called Ufa to see if he can find favour with those building a rival one.

Ufa, a virtually anonymous city in central Russia, is playing host to two gatherings this week. Wednesday saw the opening of the seventh annual summit of the BRICS developing nations that is using its increasing economic clout to challenge the G7.

When that ends, the leaders of Russia and China will remain in Ufa to preside over Thursday's meeting of the Shanghai Cooperation Organization, a military bloc seen as a potential counterweight to NATO. It's the first time BRICS and the SCO have met at the same time and the same place, and a testament to how much the interests of Russian President Vladimir Putin and Chinese President Xi Jinping have converged in recent years.

While financial aid for Greece is not on the agenda for either summit, Mr. Tsipras likely wants to show – amidst talk Greece could be pushed out of the euro zone – that Greece can and will find other partners if Europe continues to play hardball over his country's debt crisis.

"The prime minister of Greece? We are looking forward to see him," Anton Kobyakov, an adviser to Mr. Putin, said in an interview with Russia's RBK television. He said the Greek government, which has refused European creditors' demands that it introduce added austerity measures as a condition for further loans, was considering joining a new BRICS development bank that's expected to come into being later this year.

The Greek government hasn't announced a trip by Mr. Tsipras to Ufa. But in coded remarks on Wednesday that seemed directed at Mr. Tsipras's courting of Russia in particular and BRICS in general, European Council President Donald Tusk warned Greece to "seek help among your friends, not your enemies – especially when they are unable to help you."

Mr. Tsipras's pugnacity will fit well with the BRICS/SCO new world order, where the most commonly shared trait among members is a willingness to challenge the Western institutions that have dominated for the past 25 years.

Mr. Putin and Mr. Xi are the two main players in Ufa. The Russian leader is at daggers drawn with the West over the war in eastern Ukraine, and the Western sanctions imposed over Russia's annexation of the Crimean Peninsula. While Mr. Xi has better relations with Washington and Brussels, his first two years as China's paramount leader have seen the Communist Party government straining against what it sees as the constraints of Western hegemony.

"We are well aware of difficulties that we have to face both in economy and international politics, but combining efforts, no doubt we will overcome all the problems before us and solve all the problems and tasks before us," Mr. Putin told Mr. Xi at the start of a one-on-one meeting before the opening of the BRICS summit. It was the 10th bilateral meeting between the two men since Mr. Xi rose to power in March, 2013.

More intriguing is the list of those attending the SCO meeting as observer states, indicating interest in future membership: India, Pakistan, Iran, Mongolia and Afghanistan. In another sign of the group's growing clout, Iranian President Hassan Rouhani is expected to travel to Ufa, even as crunch-time negotiations are taking place in Vienna over the future of his country's Russian-backed nuclear program, and Western economic sanctions against Tehran.

"Changes are taking place in Eurasia's geopolitical architecture which was led by Western powers in the past. … International power has been shifting to emerging countries which have an increasing say in rule-making," Yang Jin, a Russia scholar at the Chinese Academy of Social Sciences, wrote in the Beijing-based Global Times newspaper.

While both Mr. Putin and Mr. Xi maintain that the Moscow-Beijing axis is a "partnership" rather than an alliance, this year has seen a rapid thickening of military and political ties between the two countries.

Last month saw each country send nine warships to the Mediterranean Sea for the first ever joint Russia-China drills in what has long been a NATO-dominated body of water. The same month saw Mr. Xi travel to Moscow to stand beside Mr. Putin on Red Square for a massive display of Russian military might that many interpreted as a growl at Ukraine and NATO. September will see Mr. Putin return the favour when China holds a military parade expected to be tinged with anti-Japanese fervour.

"Russia and China see that they need more insurance, more alternatives to lean on. This being not only themselves, but also the allies in BRICS/SCO," said Pavel Andreev, founder of the Moscow-based Centre for Global Strategies and Communications. "Of course the primary rationale is economic, but creating alternative infrastructure; everything not dominated by the U.S. is the thinking."

Greece, to Mr. Tsipras's chagrin, will likely get only moral support from BRICS and the SCO this week. In Ufa, the leaders are expected to finalize the details for what will eventually be a $100-billion (U.S.) New Development Bank headquartered in Shanghai. But the new institution – intended as a rival to the Washington-based World Bank – is not expected to be ready to start handing out loans before the end of 2015.

Besides, part of the new world order's strategy appears to be watching and cheering as the old world order fails. "This is Europe's problem," Andrey Kostin, head of the Kremlin-controlled VTB Bank, told journalists in Ufa when asked what help could be offered to Greece. "Europe created it and it has to solve it."

Military parade with foreign troops an attempt to redraw China’s wartime past
June 23, 2015 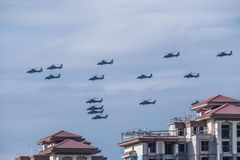 China and Russia are fast becoming good neighbours
May 12, 2015 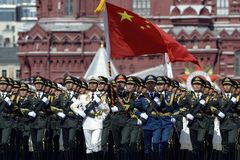 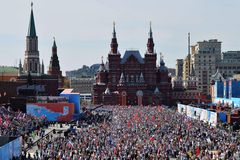