Two senior officials resigned Wednesday from Peru's government, the latest in a wave of defections amid a political crisis in the South American country.

Minister of Culture Salvador del Solar announced his resignation on Twitter without giving a reason for his decision, while presidential adviser Maximo San Roman said in a letter to embattled President Pedro Pablo Kuczynski that his recommendations were not being taken into consideration.

Their departures come days after the resignations of three members of parliament from the president's party and his minister of interior.

Kuczynski only barely survived an impeachment vote by congress last week for alleged corruption, and he set off protests at home and abroad with a Christmas Eve pardon of jailed former President Alberto Fujimori in what many Peruvians viewed as a political payback.

Kuczynski said he granted a medical pardon to the ailing 79-year-old former president on humanitarian grounds. The action allows Fujimori to leave prison after serving less than half a 25-year sentence for human rights abuses, including killings of 25 people by the military, that took place during his administration in the 1990s.

Relatives and a lawyer for some of the victims called Wednesday for judicial authorities or the Inter-American Court of Human Rights to reverse the pardon for Fujimori, who issued an apology from his hospital bed for people "wronged" by his government.

"Fujimori killed my son, and now Kuczynski in a cowardly and cruel manner ends up killing the rest of the family," one of the relatives, Javier Roca, told reporters.

Abstentions by lawmakers from a party led by a Fujimori son allowed Kuczynski to narrowly avoid being impeached late Thursday over a payment that his consulting firm received a decade ago from Brazilian construction giant Odebrecht, which has admitted bribing public officials throughout Latin America to win public works contracts. 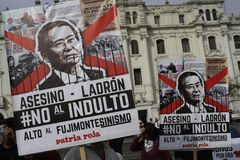 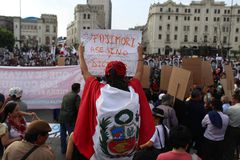 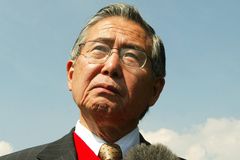