The mystery surrounding a former Russian double agent who suddenly took ill Sunday in Salisbury, England, has deepened, with police announcing that the man and his daughter were exposed to a nerve agent and that an investigating officer has also become sick.

"Having established that they were exposed to a nerve agent, we are now treating this as a major incident involving an attempted murder by the administration of a nerve agent," said Assistant Commissioner Mark Rowley, the head of counterterrorism policing in Britain. He added that the former spy, Sergei Skripal, had been deliberately targeted along with his daughter, Yulia Skripal, and that government experts have identified the chemical involved, although no details were provided.

The cloak-and-dagger drama has gripped the country and drawn comparisons with the case of Alexander Litvinenko, another former Russian spy who died in 2006 in London after drinking tea laced with radioactive polonium. A British inquiry concluded that Mr. Litvinenko's murder had been carried out by Russian operatives and was likely approved by President Vladimir Putin.

Several British politicians have been quick to blame Moscow, and on Wednesday Prime Minister Theresa May said the country would consider a partial boycott of this summer's soccer World Cup in Russia. While England's team would still participate, British dignitaries – including Prince William, who is the honorary head of the governing body of soccer in England – would stay home. Foreign Secretary Boris Johnson has also raised the possibility of sanctions and called Russia "a malign and disruptive force."

Russia has always denied any involvement in the Litvinenko case and rejected suggestions it was involved in the recent attack. "It's very hard not to assess this [speculation] as provocative, black PR designed to complicate relations between our two countries," Foreign Ministry spokeswoman Maria Zakharova told reporters in Moscow on Wednesday.

Mr. Skripal, 66, had been living a quiet life in Salisbury, a small city southwest of London better known for its famous cathedral than the intrigue of espionage. He'd become part of local life, chatting with neighbours, shopping regularly at a Polish butcher and joining a social club. Few knew about his colourful past, which included serving as a colonel in the Russian military intelligence service in Moscow while working with Britain's MI6 in the 1990s to identify dozens of Russian spies across Europe in return for cash. Russian authorities finally caught up with him, and in 2006, he was convicted of treason. He was released in 2010 and came to Britain as part of a spy swap between Russia, Britain and the United States.

He had only one remaining family member, his 33-year-old daughter, who had also worked in Britain for a while. Ms. Skripal had returned to Moscow a few years ago but was visiting last weekend when both fell ill. They were found slumped over on a bench outside a shopping mall in central Salisbury. A passerby called police, and the Skripals were rushed to a hospital, where they remain in critical condition. One of the first police officers to arrive has also taken ill and is in intensive care.

Hundreds of counterterrorism officers are now trying to figure out who carried out the attack and why. Police have sealed off a restaurant in the area and a pub and have started combing through hours of closed-circuit television footage. They will also have to determine where the nerve agent came from.

Police are also trying to reassure the public that no one else is at risk. "Clearly people will be concerned. We continue to monitor the situation with our partners, including Public Health England. If you are feeling unwell and believe you may have been in the area where this incident happened, then please seek medical advice, but we'd like to reiterate we are not seeing any evidence of a widespread issue," Mr. Rowley said.

Nerve agents are a toxic mix of chemicals that quickly attack the nervous system and shut down bodily functions. They were first developed during the Second World War and later perfected as lethal chemical weapons. According to the Organization for the Prohibition of Chemical Weapons, there are five main nerve agents – tabun, sarin, soman, cyclosarin and VX – and they are not hard to make. "Nerve agents can be manufactured by means of fairly simple chemical techniques. The raw materials are inexpensive and generally readily available," the organization says, adding that antidotes must be administered immediately.

Sarin gas is believed to have been used by the Syrian army last year, and this week, U.S. officials said North Korea used VX to kill the half-brother of leader Kim Jong-un last year in Malaysia. 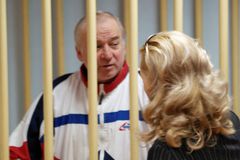