Supporters of Hillary Clinton's bid for the presidency are walking a little taller here following her performance in Monday night's debate with her Republican opponent Donald Trump.

I watched the televised debate with some 75 students at Ohio State University and talked with them until after midnight, parsing the debate performances and listening to what they're looking for in their next president.

For all of these students, this is the first election in which they'll be able to vote, and many intend to do so, largely for Ms. Clinton.

Education has been a crucial factor in this election, with surveys indicating that college education reflects something of a dividing line between supporters of Mr. Trump and those of Ms. Clinton. So I went to Columbus, traditionally a Democratic stronghold, and to Ohio State, the state's biggest university, to see if Ms. Clinton was hitting the right notes with these impressionable voters.

Rachel, an environmental-science major, said she "went into the debate with an anti-Trump attitude and found I came away with a more pro-Hillary position."

She said Ms. Clinton was "right about Trump calling climate change a hoax perpetrated by the Chinese. That's exactly what he said."

This matter was confirmed by media fact-checkers who quickly posted the proof for debate-watchers such as these students, many of whom had their eyes on their hand-held devices and their ears tuned to the TV.

Brandon, who is studying economics, said flatly: "Hillary took charge. She was bold, she antagonized Trump and he was often knocked off his game."

Rachel concurred but added something that left other students nodding in agreement: "Hillary came across fighting like a man but also came across as caring and compassionate in the face of Trump's fear-mongering."

Even the handful of Republicans in the group thought Ms. Clinton came out on top.

Dan, who is studying security and intelligence, confessed, "I'm a Republican, but I don't like Trump, and now, I'm certainly not going to vote for him.

"I don't like Hillary either," he said, "but she definitely came across as more presidential, more thoughtful.

The group as a whole had higher expectations of Ms. Clinton, however.

"I was disappointed in her," said Sara, a biology major. "I wish Hillary had stressed her incredible qualifications instead of attacking Trump for the bad things he's done.

"She has a good story to tell about herself; [there was] no need to slag him all the time."

Several students spoke of her greater eloquence during the debate.

Anders, who is studying biomedical engineering, said quietly: "I try to look at the policies more than at who was more eloquent a speaker and, by that metric too, she [Ms. Clinton] definitely won the debate. She gave details about policies; he [Mr. Trump] never said what he'd do exactly."

Many Trump supporters, however, will see their man's brashness as talking truth to power. They like that he is the anti-establishment candidate and they are unlikely to be swayed by the debate's outcome.

The students watched the debate intently; few left early. They laughed and groaned at various moments as both candidates said or did things that surprised them.

All had the sense that Mr. Trump hogged more of the time and that was not a good thing. They thought his repeated assertion that Ms. Clinton didn't have the stamina for the job was really an attack on women in general.

By the end of the discussion several spoke longingly about Bernie Sanders, the Vermont senator who challenged Ms. Clinton for the Democratic Party's nomination. They admired him too for standing up to power, though in a much more respectful manner than Mr. Trump.

Thirty-six years ago, long before these students were born, I was also in Ohio covering the presidential debate in Cleveland between the incumbent president Jimmy Carter, seeking a second term, and Ronald Reagan.

Mr. Reagan won that debate when Mr. Carter uncharacteristically went on the offensive, attacking the former governor of California. "There you go again," Mr. Reagan calmly replied to repeated assaults. It made him appear to be the responsible grownup while the president appeared desperate.

Mr. Carter had been leading in the polls going into that debate; he was not leading going out.

Monday night's highly promoted showdown may not have had the same dramatic effect as that 1980 exchange, but it just might have stopped the bleeding for Hillary Clinton. 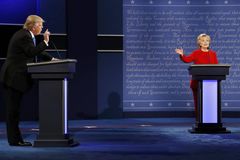 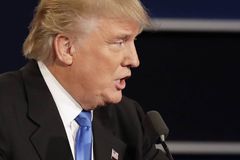 Opinion
Trump as president? No reasonable voter could want that after the debate
September 26, 2016