In his early weeks in the White House, Donald Trump has wreaked havoc with tradition as he stormed through many of the rituals of his office. Tuesday night presents him with another challenge, the presidential address before a joint session of Congress – and lawmakers of both parties are wondering, part in fascination, part in dread, whether he will conform to custom in that venue, or transform this important juncture in the Trump administration into another free-form, tradition-busting moment.

The custom – by Franklin Delano Roosevelt after returning from the Yalta summit; Lyndon B. Johnson just days after the assassination of John F. Kennedy; and Ronald Reagan shortly after he recovered from gunshot wounds in the first year of his presidency – calls for a sober set-piece address.

This will be Mr. Trump's first foray into this forum, and after a hectic opening to his administration, both his supporters and opponents await a more measured and more internally consistent message from the President.

Margaret Wente: Trump administration: Is it tragedy or is it farce?

Opinion: Is Donald Trump bad, mad – or both?

Analysis: U.S. presidency: It's Donald Trump vs. Everyone Else

This forum of decorum demands more preparation and polish than the President's customary manners of communication, the tweet that more often provokes than prescribes and the calculated outburst like the one he delivered against the press and the FBI late last week.

This could be the occasion for the President to set forth specific budget requests, sketch his spending priorities, perhaps give shape to his notions of overturning Barack Obama's health-care scheme. Here is a viewers' guide to the 45th President's appearance before the Republicans who remain skeptical of his depth and discretion and the Democrats who are ever more troubled by his proposals and rhetorical perambulations.

Does he aim his address to the public watching on television or to the lawmakers sitting in front of him?

This is an important distinction. The President has unlimited access to the public airwaves and has used that access promiscuously if not always prudently. But he has fewer opportunities to speak directly to the senators and representatives in whose hands his legislative agenda rests. Tuesday night is an unusual opportunity to calm the nerves of Republicans and to show openness to Democrats.

That is why that evening presents such an important moment of passage for Mr. Trump. His inaugural address offered few gestures of outreach to his opponents; there was no talk of "the offered hand," a favourite metaphor of former president George H.W. Bush, who first employed that image in his inaugural address and then, two years later, risked his presidency (and his legacy) by abandoning the bitter partisanship of his campaign and seeking a denouement with Democrats to address the yawning budget deficit.

Another reason the White House may want to make the lawmakers the principal audience of this message: A country thirsty for effective government and contemptuous of political gridlock might well respond positively to a President who indicates, in words as well as in tone, a willingness to work together with Congress rather than to bicker with it.

Does he clear away the clutter around the vital issues of health care and tax overhaul?

These are the two most pressing questions facing Congress this year, and for all their urgency there is no clarity from the White House or the relevant Washington regulatory agencies on how to proceed. Republican members of Congress spent last week on the defensive at home during the annual February break; they were besieged by angry constituents concerned about the future of health insurance after a bruising campaign in which Mr. Trump vowed to eliminate Mr. Obama's health-care plan. Republican lawmakers in Pennsylvania, where Mr. Trump scored a surprise but important victory in November, skipped public events so as to avoid the wrath of protesters.

Congress is flooded with various plans to replace Obamacare or to overhaul the tax code, a persistent demand of Republicans who want to reshape the revenue system to promote growth. But there will be little progress on either until Mr. Trump makes clear how he wants to proceed.

The most memorable moment of the Johnson message after the Kennedy assassination in November, 1963, was the phrase "Let us continue"; it was an echo of Mr. Kennedy's inaugural-address remark that, while the United States of 1961 faced many challenges at home and abroad, it was time to "begin" the effort of facing them. Mr. Johnson used the same technique 16 months later when he went to Congress to win passage of a voting-rights bill for black Americans.

He adopted the most stirring protest song of the era by saying, in the very setting Mr. Trump will occupy, "We shall overcome."

In his campaign, Mr. Trump brilliantly sensed, and then expressed, the anger of the dispossessed and those on the losing side of the wealth deficit. He did less well with college-educated Americans, progressives, and committed conservatives. With an approval rate at 41 per cent according to the latest McClatchy-Marist national poll, about 20 points lower than most presidents in their first term in office, this is a moment when Mr. Trump might set forth both his political agenda and his willingness to consult as well as to hector, to reach out rather than to brush aside.

Presidents have had such opportunities before. Not all of them seized them. For Mr. Trump, with slumping approval ratings, the tensions in his country are unusually high. So, too, may be the viewership for Tuesday's address – and the stakes. 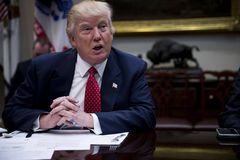