It is only on Page 62 of the 63 pages of evidence Swedish prosecutors filed last week in their "aggravated bribery" case against employees of Bombardier Inc. that the name finally appears: "Yakunin" – as in Vladimir Yakunin, the long-time boss of Russian Railways.

It is a single mention in a 2014 memo. But it is clear from the context that knowing Mr. Yakunin – a confidant of Russian President Vladimir Putin – was key to getting things done in the railway sector in Russia and other parts of the former Soviet Union, at least at the time it was written.

Mr. Yakunin's name is absent from documents on 100 transactions The Globe and Mail examined in a 2016 investigation involving Bombardier's Swedish subsidiary, Bombardier Transportation Sweden, and a mysterious shell company called Multiserv Overseas Ltd. that is at the centre of some of the allegations now before a Stockholm court. But there was a hint: Company registration documents showed Multiserv Overseas was founded by a man frequently referred to in Russian media as a business associate of Mr. Yakunin's.

More curiously, Mr. Yakunin's name was absent from the list of Kremlin-connected individuals Ottawa targeted for sanctions over Russia's 2014 annexation of the Crimean Peninsula.

Although Mr. Yakunin was among the first people the United States targeted for sanctions – the Treasury Department said "Yakunin is being designated because of his official position in the Russian government, but he is also a close confidant of Putin" – the former railway czar has managed to stay off the Canadian list through 13 extensions (including sanctions related to Russia's support for separatists in eastern Ukraine) as well as a change in government from Stephen Harper's Conservatives to Justin Trudeau's Liberals.

When Foreign Affairs Minister Chrystia Freeland was on the opposition benches, she called the Harper government "hypocritical" for leaving Mr. Yakunin – as well as Igor Sechin, chairman of the state-owned Rosneft oil giant, and another close ally of Mr. Putin – off its sanctions list. "When will this government match its actions to its rhetoric and sanction Sechin and Yakunin?" she asked the House of Commons in February, 2015.

But her government – which added 15 new names to the sanctions list in November – has also avoided targeting Mr. Yakunin.

A spokesman for Ms. Freeland said on Monday that the Liberal government imposes sanctions on people who had a role in the annexation of Crimea. "We will continue to sanction those individuals involved in Russia's illegal annexation of Crimea and its destabilizing activities in Ukraine," he said.

So who is Mr. Yakunin, the often-unsaid name at the centre of questions surrounding the way Bombardier's rail division allegedly does business in Russia and the former Soviet Union?

The 68-year-old became a millionaire during his decade at the helm of Russian Railways. The Russian edition of Forbes magazine reported that Mr. Yakunin drew an $11-million (U.S.) salary in 2014, the year he was placed on the U.S. sanctions list.

Two things that are clear are that Mr. Yakunin had close personal connections to Mr. Putin, and that Bombardier's fortunes in Russia improved after Mr. Yakunin took over the top post of Russian Railways in 2005.

The ties to Mr. Putin date back to the 1990s, before Mr. Putin's rise to the presidency. The two men owned neighbouring dachas – Russian country cottages – on the shores of Lake Kolomenskoye, outside Mr. Putin's native St. Petersburg. With six others, they formed a dacha co-operative known as Ozero, a group Mr. Putin has remained close to throughout his 17 years as either President or prime minister, repeatedly calling on members of the dacha club to fill key posts.

Another Ozero founder, Yuriy Kovalchuk, has been targeted by Canada (as well as the United States and European Union) for sanctions over Crimea. The U.S. Treasury Department dubbed Mr. Kovalchuk the "cashier" for Mr. Putin's personal wealth.

So why are Mr. Kovalchuk and so many other members of Mr. Putin's inner circle fair game for sanctions when Mr. Yakunin still is not?

That is where the ties between Bombardier and Russian Railways appear to come in. In response to The Globe's investigation into Multiserv Overseas, Bombardier's vice-president of communications and public affairs, Mike Nadolski, insisted that Multiserv Overseas was a legitimate business partner.

But he acknowledged Bombardier had indeed lobbied to keep Mr. Yakunin's name off the sanctions list. "We informed the Canadian government of Bombardier's investments and interests in Russia when Canada was considering imposing sanctions. Our main concern was ensuring that our rail business would not be placed at a competitive disadvantage against our global competitors," Mr. Nadolski wrote, noting that Mr. Yakunin was not facing sanctions from the EU, China, Japan or South Korea. "Including Mr. Yakunin on Canada's sanctions list could have unilaterally harmed a Canadian business."

In e-mailed replies to questions from The Globe and Mail about Multiserv Overseas and his relationship with Bombardier, Mr. Yakunin lavished praise on former Bombardier chief executive officer Laurent Beaudoin, calling him "one of the greatest professionals I have ever met."

Mr. Yakunin announced his sudden retirement from Russian Railways after media reports alleged he had funnelled contracts worth billions of dollars to close business associates using shell companies to disguise the ultimate beneficiaries.

In an internal Bombardier e-mail from September, 2015, that was presented in Swedish court on Friday, Multiserv Overseas is described as "owned by the management of the public sector companies involved in these trades and used as a vehicle to siphon monies from the public sector into private pockets." (The allegations in Sweden relate to a single 2013 deal that Bombardier Transportation Sweden did in Azerbaijan, partly via Multiserv Overseas. The deal was was one of the 100 transactions The Globe looked at in its 2016 investigation involving the sale of Bombardier signalling equipment into Russia via the same shell company.)

The Globe and Mail's investigation revealed that Multiserv Overseas – which has a constantly shifting ownership and management structure – was founded in 2010 by Yuriy Obodovskiy, a long-time associate of Mr. Yakunin's.

In his e-mail exchange with The Globe and Mail last year, Mr. Yakunin said he only "vaguely recall[ed] the name Multiserv" and said it was "simply impossible" that Russian Railways contracts were improperly awarded.

But the 2014 memo found at the end of the 63 pages entered as evidence in Stockholm last week draws a clear line between Mr. Obodovskiy – who is also deputy chairman of the board of Elteza, a joint venture between Bombardier and Russian Railways – and Mr. Yakunin.

The memo appears to have been prepared for a Bombardier employee who was going to meet Mr. Obodovskiy. It says Mr. Obodovskiy is part of a "small group of powerful people" that the author of the memo calls "the Partners."

Then, finally, comes Mr. Yakunin's name: "Partners have access to Yakunin and all key members of [Russian Railways] management except [one vice-president of the company]. Also they have access to almost all heads of Railways of former USSR countries. Having such connections they can influence to decision taken from both technical and commercial sides."

It is not clear what influence Mr. Yakunin retained after his formal departure from Russian Railways in August, 2015. The transactions between Bombardier Transportation Sweden and Multiserv Overseas continued until at least October, 2016. 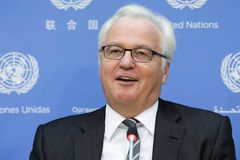 Russia decries Ukraine mission, as Freeland warns of disinformation campaigns
March 7, 2017
Follow Mark MacKinnon on Twitter @markmackinnon
Report an error Editorial code of conduct
Due to technical reasons, we have temporarily removed commenting from our articles. We hope to have this fixed soon. Thank you for your patience. If you are looking to give feedback on our new site, please send it along to feedback@globeandmail.com. If you want to write a letter to the editor, please forward to letters@globeandmail.com.
Comments are closed