The murder of an 18-month-old Palestinian toddler could be a turning point in the Israeli-Palestinian conflict.

Ali Dawabsheh was killed early Friday morning in an apparent arson attack believed to have been carried out by Jewish extremists as the Dawabsheh family was sleeping. The attack on their three-room concrete house on the edge of this Palestinian community of 2,800 southeast of Nablus left Ali's parents and four-year-old brother severely burned. His mother is in critical condition with burns to 90 per cent of her body.

Neighbours said the mother and father ran from the house screaming as two masked men made their getaway.

Four-year-old Ahmed was helped from the house, but Ali never emerged.

Inside the house, the family's sole bedroom, where all four slept, was gutted. Amid the burned mattresses and remnants of shelves, a soggy scrapbook lay on the floor. Inside were scorched photos of the family – Ali was shown as a smiling, chubby-cheeked child.

A firebomb was believed to have been thrown through the bedroom window, engulfing everyone in flames.

Mr. Deryeh said he treated the father and the older boy at the scene.

"Whatever fuel was used to ignite the fire seemed to stick to the victims' skin," he said. "The father was melting before my eyes." These two casualties also were evacuated to hospital in Israel.

Once the fire was extinguished, the visibly shocked paramedic said, he entered the home in search of young Ali. "I finally saw him," he said. "He looked like a piece of charcoal with a face."

Outside the house, the arsonists left two menacing messages: "Revenge" read one, beneath a crude Star of David; "The Messiah will live forever," read the other, adorned with a three-pointed crown. Both spray-painted messages were written in Hebrew.

So-called price-tag attacks have taken place frequently the past few years, with radical young settlers attacking mosques, churches, cars and homes as a kind of retribution for government action that seeks to curb settlement expansion.

Earlier this week Israeli authorities, carrying out a court order, demolished two structures in the nearby settlement of Beit El that had been built on private Palestinian property. While this action may have drawn reaction from some quarters, murder seems out of proportion even for radical settlers.

Just a month ago, there was another incident closer to Duma that may have brought on the attack, noted Yazid Dawabsheh, a lawyer from Duma and relative of the victims.

Malachi Rosenfeld, 25, was returning one night to his home in the nearby settlement of Shilo, when men in a Palestinian car opened fire on him and his companions. Mr. Rosenfeld died of his wounds the following day.

Beyond price tags, settlers also have carried out hundreds of other attacks on Palestinians this year alone. Most take the form of uprooting olive trees or hacking off their branches, stoning Palestinian cars, burning farmers' fields, smashing car windshields and leaving racist graffiti. But the impunity with which these extremists operate may well have contributed to raising the stakes.

Israeli and Palestinian leaders all condemned Friday's arson attack as an act of terrorism, with Prime Minister Benjamin Netanyahu telephoning Palestinian President Mahmoud Abbas to express condolences and to urge the two sides to work together to end such violence.

"It's upon us to together fight terrorism, no matter which side perpetrates it," Mr. Netanyahu said.

Israeli President Reuven Rivlin was eloquent. He said he was pained "that from my people [Jews], there are those who have chosen the path of terrorism, and have lost their humanity."

"To my great sorrow," he said, "until now, it seems we have been lax in our treatment of the phenomena of Jewish terrorism."

Friday's attack came just as Israelis were digesting the news of a series of stabbings carried out at a Pride march Thursday evening in Jerusalem; at the end of a week that saw Beit El settlers battle Israeli police enforcing a court order.

"We are at war," said Yair Lapid, leader of the centrist party known as Yesh Atid (There is a Future).

"He who burns a Palestinian baby declares war on the State of Israel," Mr. Lapid wrote on his Facebook page Friday.

The Israel Defence Forces are going to war against the enemy, he said, "only this time the enemy is from here, from inside, from within us.

Acts of contrition might be too little too late, however.

Palestinians in the West Bank are calling for revenge of their own. "With our souls and blood we shall redeem you, martyr," the men chanted as Ali's small body, draped in the Palestinian flag, was carried from the mosque to a nearby cemetery.

Before Ali's funeral was over, shots rang out just a few kilometres from the village, hitting a car carrying Israeli settlers. The car ran off the road, though no one was reported injured, and the driver returned fire. Israeli soldiers quickly flooded the area searching for the attacker.

It fell to Samir Dawabsheh, a relative of the victims and head of the village council, to end the funeral with a note of hope.

"Ali is a symbol of what has gone wrong between our peoples," he said.

"His death must keep our Palestinian cause alive." 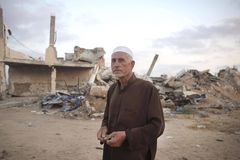