When Vladimir Putin flew an ultralight airplane with Siberian cranes this week, it was dismissed as the latest in a series of stunts designed to enhance his public image. (Earlier efforts have included tranquillizing a tiger and diving in a miniature submarine.)

Mr. Putin was supposedly leading the cranes to their traditional wintering grounds, but for anyone familiar with this unusual exercise, there were some problems. For starters, the Russian President did not appear to be actually flying the flimsy aircraft – he was in the pilot's seat, but someone sitting behind him was manipulating the controls through looped aluminum tubes known as "cheater bars."

I noticed this because I am one of the few pilots to have flown with a bird even more endangered than those of Mr. Putin – North America's whooping crane. I have been aloft in everything from hang gliders to the F-16 fighter jet, but nothing has been quite like flying with the cranes.

It happened in 2002, when Bill Lishman, the Canadian inventor and pilot whose work inspired a Hollywood movie, asked me to join Operation Migration, a group formed to teach birds to follow migratory routes that their species have forgotten.

Mr. Lishman is the godfather of flying with the birds. In the 1980s, he taught Canada geese to follow his homemade ultralight, exploits dramatized in Fly Away Home. By the time the film appeared in 1996, he and his partners had joined the campaign to bring the whooping crane back from the brink.

My job was to help lead 16 juvenile whooping cranes from Wisconsin to Florida, a flight path that each new generation had learned from its parents until a few decades earlier when the process had broken down. Now, the birds were being born and raised at a hatchery, then taught to fly south by playing follow the leader.

Losing the ability to migrate was part of the long decline that had nearly wiped out the whooping crane, which once numbered in the thousands, but lost ground as settlers drained its wetland habitat. The bird's extraordinary beauty and size (bigger than Mr. Putin's bird, an adult can stand six feet tall with a wingspan of seven feet) made it a natural target. In the early 1900s, hunters shot hundreds and sold them to collectors for $5 apiece.

The low point came in the 1940s, when only 15 whooping cranes remained. Since then, bird fanciers and environmentalists have waged a passionate battle to keep the species alive. By the time I flew with Operation Migration, the population had risen to 413.

My journey began at the hatchery, where I was fitted with a white smock and fake beak to make me resemble an adult crane. Mr. Putin did without a beak, but I was to wear mine at all times, even in flight, so that the young cranes would think I was one of them. They had already been taught to follow ultralights in place of their missing parents. Now, it was time for the long flight south.

There was no great rush. In fact, the migration project resembled a travelling circus, slowly inching its way across America at a pace determined by the whimsy and energy level of what look like adolescent pterodactyls. When I arrived, the team had been on the road for almost two weeks – and travelled just 91 miles. There were 1,200 more to go.

"You could get there faster by walking," one pilot observed.

In all, there were 13 pilots and crew with five French-built aircraft, a Cessna chase plane and a squadron of trucks and trailers packed with equipment and supplies, such as spare propeller blades, camouflage nets, sewing machines, vacuum-packed bags of frozen smelts (the bird's favourite snack) and radio-tracking systems that looked like something from a 1950s spy movie.

At night, the young cranes were kept in coyote-proof pens assembled at each new location. When released at dawn, they rose to follow the ultralights as we buzzed down to ground level to begin the trek.

I had seen pictures of the operation and yet was stunned at the sight of the cranes flying next to us like something out of a dream, outlined against the green hills below. One bird glided right next to me, surfing in my wake.

But the reverie was short-lived. In reality, the exercise was more like a risky, aerial version of a cattle drive. We had to battle turbulence, deke around power lines and make sure no birds got lost.

Juvenile cranes are notorious for dropping out of formation – they may get tired, or bored, and spiral away to land in a field. If a bird broke ranks, I had to spiral down with it like a fighter pilot chasing an enemy, then mark the location with my GPS so that the ground crew could pick it up. (One youngster did about half the trip in the back of a truck.)

Once on the ground, the cranes were at the mercy of predators and hunters, who may not realize they had trained their shotguns on one of the rarest birds in the world.

In fact, public awareness is crucial to any threatened creature's battle against the forces of extinction. Mr. Putin's critics may have a point when they mock him for turning his flight into a media circus this week. But, in the process, he brought some attention to bird badly in need of some. For cranes, there is no such thing as bad publicity.

Russia hopes plan to save endangered tigers worth more than the sum of their parts
November 18, 2010 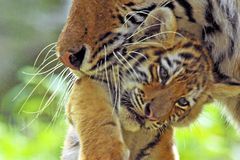 Ontario outfit whoops it up as four cranes fly away home
April 27, 2002
Follow Peter Cheney on Twitter @cheneydrive
Report an error Editorial code of conduct
Due to technical reasons, we have temporarily removed commenting from our articles. We hope to have this fixed soon. Thank you for your patience. If you are looking to give feedback on our new site, please send it along to feedback@globeandmail.com. If you want to write a letter to the editor, please forward to letters@globeandmail.com.
Comments