The outlines of a partitioned Iraq have been apparent for almost a decade now. As Sunni turned on Shiite, and Kurds moved to hive off a state of their own, in the fire of post-Saddam Hussein Iraq, the questions came fast: could these peoples ever again live together in peace? Should they?

A lull in the fighting – and it was only that – let those questions go unanswered.

Now, with the Iraqi national army crumbling before an advance by militants from the Islamic State of Iraq and the Levant, or ISIL – which is vowing to push toward Baghdad after capturing the predominantly Sunni cities of Mosul and Tikrit this week – and Kurdish peshmerga fighters taking advantage of the chaos to seize the oil-rich city of Kirkuk, it's clearer than ever that there is not one, but three Iraqs.

Though Prime Minister Nouri al-Maliki would love to continue portraying this conflict as a battle between his government's forces and "terrorists" linked to al-Qaeda, ISIL is making rapid gains because it has the support of much of the Sunni population north and west of Baghdad. While ISIL is indeed led by extremists who adhere to a harsh version of Islam and have no qualms about beheading those it sees as unbelievers, the sad truth is that many Sunni Iraqis now prefer ISIL to Mr. Maliki's government, which they see as dominated by Shiites and beholden to neighbouring Iran.

That ISIL fighters were joined by remnants of Mr. Hussein's (secular Sunni) Baath Party in its offensive speaks to how sectarianism is now a far more powerful force than any lingering sense of Iraqi, or even Arab, national identity.

The Kurdish move on Kirkuk will get fewer headlines today than the Sunni advance on Baghdad, but it's just as significant. One thing preventing the Kurdish ministate that already exists in northern Iraq from declaring independence was the fact that Kirkuk – a city Kurds speak of as their Jerusalem – lay outside the boundaries of the Kurdish autonomous region. Now that the Iraqi army has disappeared from Kirkuk and the peshmerga have taken over, it's hard to imagine the Kurds giving the city back without a fight.

The same forces exist in neighbouring Syria. President Bashar al-Assad's regime – which is dominated by members of his family's Alawite sect, an offshoot of Shia Islam – looks far more secure than it did 12 months ago (thanks to intervention by Mr. al-Assad's Shia allies, Lebanon's Hezbollah and Iran's Revolutionary Guard). But his forces only have real control over the band stretching from Damascus to the Alawite coastal strongholds of Lattakia and Tartus. It's difficult to envision a future where the ISIL and (secular Sunni) Free Syrian Army-held areas of eastern and northern Syria, or the Kurdish enclaves in the northeast of the country, will ever again accept domination by the al-Assad dynasty.

As with Iraq, there are now three Syrias. Arguably, there always were.

Both Iraq and Syria are artificial creations, their borders drawn with rulers following the collapse of the Ottoman Empire by British and French governors anxious to curb each other's ambitions, while keeping the locals under control. While the lines the colonizers drew between Sunni and Shia and Kurd never made much sense, the rise of Arab nationalists such as Mr. Hussein and Bashar's father, Hafez al-Assad, held Iraq and Syria together in the decades following the retreat of the colonial powers.

The forces unleashed by the 2003 U.S. invasion of Iraq – sectarianism, a desire for self-determination, and a vicious circle of revenge – have laid plain the original sins in those European-drawn maps.

A lasting peace now almost certainly involves redrawing the borders of both Iraq and Syria, perhaps even simultaneously. While few want to see an ISIL-led shariah state stretching from Tikrit to Aleppo, that's effectively what exists now. Better for the West to help build a Sunni Arab republic, and to encourage forces of moderation within it, than to continue supporting the Maliki and al-Assad governments against a people that no longer want to be ruled by them. (The Maliki government has reportedly requested U.S. air strikes against ISIL-held areas of Iraq. The White House has wisely refused – thus far –to wade back in to the Iraq's sectarian morass.)

It's unclear how many of those fighting the Iraqi army today truly want to live in a Sunni caliphate, and how many simply no longer want to be ruled by the Maliki government. It's important to separate those two causes before they fully merge into one.

Turkey, which fears a new uprising among its own Kurdish population, has long fought to prevent the creation of a Kurdish state in northern Iraq. But it's no longer sensible to demand that the Kurds – who have done a decent job of building their own economy and institutions over the past decade – remain within a violently disintegrating Iraq.

What's left to the Maliki and Assad governments are the areas where people don't mind being governed by them. A Shia ministate in Iraq would likely comprise of Baghdad (or at least part of it) and the oil-rich southeast of the country. Mr. al-Assad's Syria would be the Mediterranean coast and the Lebanon border areas.

Partition lines can't and won't be neatly drawn, of course. Syria's civil war has raged fiercest in and around the cities of Damascus and Aleppo, which have mixed populations of Sunnis, Alawite, Christians, Druze and Kurds. Similarly, ISIL's advance in Iraq will almost certainly stall when it reaches Baghdad with its own mixed population. Shia neighbourhoods will fight ISIL, just as Sunni neighbourhoods of the capital have resisted being ruled by Mr. Maliki.

Baghdad is already a city of walls, dividing neighbourhoods by sect, just as Belfast was divided during Northern Ireland's "Troubles" and much of Arab-dominated East Jerusalem is walled off now by the Israeli government. Damascus and Aleppo may face the same grim futures.

But despite the complications that would follow, it's time to start talking about undoing the mess that colonizers made in mapping the Middle East.

It's a scary idea. Western policymakers justifiably fear the disintegration of Iraq and Syria would next lead to the violent breakup of neighbouring countries like Lebanon and Jordan that have their own internal fissures. The Balkanization of the Middle East.

But while "Balkanization" is a bad word in foreign policy circles – it means violent instability in the short term – perhaps it shouldn't be.

After all, it was Balkanization – allowing each people to go its own way – that finally brought peace to the Balkans, a region whose conflicts were once considered as irresolvable as those now facing the Middle East. 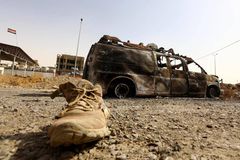