Among those who prefer dialogue, negotiation and compromise to the use of force in international relations, the last few weeks have been both exceptional and instructive.

For more than a decade – in Afghanistan, Iraq and Libya – major powers have reached first for the gun. Defence, rather than diplomacy or development, has been the international policy instrument of choice.

That said, recent events suggest that something better may be in store.

The United States, for instance, is talking constructively with Iran for the first time since 1979. The greatest achievement, however, has been the U.S. – Russian deal to avert a widened war in Syria. Just over a month ago, a U.S.-British-French attack on the Assad regime looked inevitable. It mattered little that more civilians may have been killed in the strikes than saved as a result of them, or that this course of action may have bolstered the position of extremist elements fighting to depose the regime in Damascus.

The release of another riveting episode of "shock and awe" seemed just a matter of time.

Then along came an amazing series of events which underscored not only the signal importance of the unanticipated, but also the powerful sway of shared interests, suddenly revealed.

Add to that alchemy a sprinkling of chance, luck and timing, and within days the game had changed.

What exactly has happened, and want to make of it all?

The tide began to turn on August 29 with the stunning repudiation of British Prime Minister David Cameron's pro-war motion in the UK Parliament. On August 31, President Obama surprisingly announced that he was referring the matter of military intervention to Congress. On September 6, the previously hawkish French President indicated that he was going to defer a decision on military action until after the UN weapons inspectors had filed their report. One day later, all 28 European Union foreign ministers served notice that they would follow suit. By that time, the stage was set for Secretary of State John Kerry's offhand remark that war could be averted if Assad agreed to surrender Syria's chemical weapons. Sensing a strategic opportunity to seize the initiative, in rushed the Russians, who quickly delivered Syrian accession to Kerry's preconditions.

Since then, as decision-makers in both the United States and Russia sensed that a win/win deal was within reach, all movement has been further away from the precipice.

By September 27, the 15 members of the UN Security Council had unanimously approved a resolution demanding the eradication of Syria's arsenal of chemical weapons. This resolution followed an earlier decision by the Organization for the Prohibition of Chemical Weapons which set out the necessary steps for the verification and destruction of the estimated 1000 ton stockpile by July, 2014. A team of UN inspectors has already arrived in Damascus to begin that process.

The consequences of these fast breaking developments are far-reaching.

A widely reviled and brutally authoritarian regime has been forced to accede to the strict provisions of the Chemical Weapons Convention, and in so doing will be disarmed of some it its most lethal military assets.

Western military intervention on one side of a civil war, with all of the downside risk which that would have entailed, has at minimum been postponed, and quite possibly averted entirely. At Russia's insistence, the Security Council resolution was passed without reference to the use of force in the case of non-compliance. To be legal, punitive action would require a second resolution. Not only could that prove difficult to engineer, but circumventing Security Council authorization would be politically awkward now that the multilateral option has been exercised.

Moving back from the brink of calamity is certainly desirable, but even more important is the opening created for multilateralism and diplomacy.

Most immediately, the widespread presence of UN inspectors on the ground in Syria may require the negotiation of a ceasefire. That could provide a starting point for addressing the underlying causes of the conflict in Syria. Initial signs are promising.

In the medium term, the UN, and especially the Security Council has demonstrated its continuing relevance and legitimacy as the central body in a rules-based world order. After taking a severe hit in 2011 when a resolution to protect civilians in Libya was interpreted by NATO members as a licence to pursue regime change, the reputation of world's foremost international institution for maintaining peace and security has been burnished.

At the highest level of analysis, it may be, as U.S. UN Ambassador Samantha Power and Secretary Kerry repeatedly insist, that it was only the threat of force which triggered the positive outcomes outlined above. But there is a more important lesson, and it stands as the Cold War's most enduring legacy: militaries work best when they are not used. Unleashed, the dogs of war make a terrible mess. They are best kept in their kennels as a deterrent.

For scholars of diplomacy, this series of events also represents an intriguing case study. In terms of old-style, personality-driven high politics, the roles played by Presidents Putin and Obama, and Foreign Ministers Lavrov and Kerry have demonstrated the continuing relevance of leaders and states in the erstwhile age of globalization. Less obvious, perhaps, is the experiment in science diplomacy which is unfolding on the ground. The weapons inspectors being deployed across Syria are scientists, specialized experts with an interest in the facts and no axes to grind. When conventional political and diplomatic channels are strained or blocked, the work of disinterested chemists, physicists and biologists can keep vital lines of communication open. As practitioners of an evidence-based form of knowledge acquisition, these professionals speak a universal and non-ideological language that can make a critical contribution to international problem solving.

Such is exactly the case here, and the Syrian experience could prove more broadly applicable. Over the longer term, humanity's collective future will depend in large part on improved performance in broaching transnational perils, including climate change, diminishing biodiversity, pandemic disease and environmental collapse. On this small planet, beset by a host of threats and challenges which are rooted in science and driven by technology, practical experience in science diplomacy can only help to improve global prospects.

Finally, although the halcyon days of Canadian internationalism are long gone, there are some national angles to this story as well. The head of the UN weapons inspection team, Scott Cairns, is a Canadian; his quiet resolve and steely determination are striking. Secondly, PM Harper's decision to again abstain from addressing the UN General Assembly may ironically have worked in favour of the efforts of Canadian diplomats in that forum.

All told, the latest news for diplomacy and international relations is good. Multilateralism has shown itself to be effective, and the utility of force marginal. While it would be premature to suggest that the disastrous War on Terror is finally over, there are signs that the world has at least begun to emerge from the long, dark and violent post-9/11 tunnel.

Daryl Copeland is the author of Guerrilla Diplomacy, Senior Fellow at the Canadian Defence and Foreign Affairs Institute and a former Canadian diplomat. Follow him on Twitter @guerrilladiplo.

This week proved that the UN-bashers are wrong
Subscriber content
September 27, 2013 Opinion
Turkey is an important partner. Why do we treat it like an outsider?
September 27, 2013 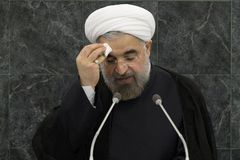