Bessma Momani is a senior fellow at the Centre for International Governance and Innovation and a professor at the University of Waterloo's Balsillie School of International Affairs.

Turkey's failed coup d'etat will be a night few Turks will forget and will be noted as the first in Turkey's tumultuous modern history of coups that actually failed.

After hours of gruelling uncertainty, as a military faction tried to take over the state, Turks awoke to their democratic edifices intact, despite their scorched parliament. Turkey's bellicose and defiant President Recep Tayyip Erdogan has since vowed to cleanse the army and state of treasonists.

Therein lies the fear: Turks may have seen the organs of democracy restored, but more autocracy, repression and fear will likely dominate Turkish politics for years to come.

Seizing state broadcaster TRT, the military faction dubbed itself the Peace Council and declared that its intentions were to restore constitutional order, rule of law and the return of legitimacy to the state. Having watched Mr. Erdogan continue to consolidate power in the past few years, the military faction and his opponents alike have been mortified at his goal to change the constitution to give himself more authority and alter the largely symbolic presidential role to an omnipotent one.

Symbolizing this invincibility best, Mr. Erdogan built himself a presidential palace with more than a thousand rooms that was inaugurated by Ottoman-era-dressed guards; it was hardly surprising that Mr. Erdogan wanted to remind Turks and the world that the imperial times of the pre-20th-century empire were back and Mr. Erdogan was the new sultan.

Yet unlike the longest-ruling Ottoman Sultan Suleiman the Magnificent who ruled over the Golden Age in Turkish culture, art, and politics, Mr. Erdogan has for years repressed Turkish intellectuals, arrested journalists and fired or suppressed potential competitors to his supreme self. Newspapers critical of the Turkish government have been shut down, social-media sites have been periodically restricted, censorship of socially liberal subjects have been instated and journalists have been silenced for being critical of the new sultan. Democracy was badly bruised and beaten before the failed coup attempt and yet the prognosis of Turkish democracy is bleaker than ever.

Where political acts of defiance and independence are taken as personal threats by Mr. Erdogan's confrontational nature, the attempted coup will propel him further to consolidate power and suppress his opponents. The list of Erdogan opponents was already long and included the free press, intellectuals, separatist Kurds, environmentalists, the LGBTQ community, ultranationalists, leftists, the judiciary, the army and the Gulenist movement.

It is this last group, the Gulenist movement – whose supporters follow Fethullah Gulen, a reclusive spiritual leader exiled in Pennsylvania – that Mr. Erdogan has blamed for the failed coup attempt. Few Gulenists actually admit to their membership, support and participation in this loose network, preferring to work silently and anonymously.

Despised or feared by the majority of Turks, millions of Gulenists are said to operate in the shadows of the highest echelons of Turkish society and politics, and are often deemed to be part of a parallel state.

When substantial corruption charges were brought to the judiciary in 2013 implicating Mr. Erdogan, his sons and his inner circle of cronies and supporters with damning audio-taped evidence of shady deals worth hundreds of millions of dollars, Mr. Erdogan accused those investigating corruption charges against him of being Gulenists. At that time, hundreds of judges, police officers and secret-service members were sacked, demoted or relocated.

Moving forward, the witch-hunt for Gulenists will leave no Erdogan critic left standing, regardless of their connection to Mr. Gulen. Using the failed coup as a pretext, Mr. Erdogan will begin his targeted attacks on his opponents. In the succeeding hours, Mr. Erdogan had already arrested thousands of army officers and detained thousands of judges. He has detained many of the judges who overturned his earlier claims that the army was plotting a coup with Gulenists against him only a few years ago and the judges that he presumes will stand in his way of forging constitutional change.

Mr. Erdogan's proclamation to "cleanse" Turkey of Gulenists will be his ultimate battle and there is no stopping the collateral damage that will ensue to the vestiges of Turkish society, polity and democracy. Despite a failed coup, Turks awoke to a new nightmare in Turkish political history. 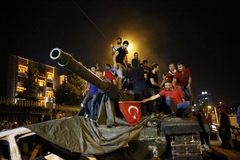 Opinion
The military’s last stand: What went wrong for Turkey’s coup plotters
May 16, 2018 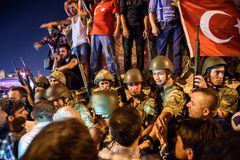 Once again, army rises up against pro-Islamic government in Turkey
May 16, 2018 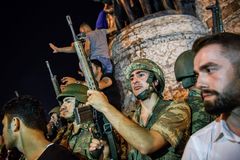