"If a chair is designed to recline, and you recline at appropriate times (as in not mid-food service), then you should be allowed to do so," one of my colleagues said, completely irrationally.

I refuted this with impeccable logic: "Some chairs are designed to electrocute people. Doesn't make it right." Such are the giddy rhetorical heights we reach at Canada's national newspaper when matters of world import are being discussed.

In this case, the question was: Does an airline passenger have a right to recline his or her seat at the expense of the person sitting behind? This discussion exploded this week after two passengers disrupted a flight from Newark to Denver. One tried to recline her seat, but was prevented by the man behind deploying a nefarious anti-reclining gadget called "The Knee Defender." Tempers exploded. Water was thrown. Shame may have been felt, or more likely not. Each of the passengers was 48 years old, which is 43 years past the official deadline for knowing how to behave in public.

There is no right answer to the reclining debate, despite the heated conviction of each side. When space is finite and two parties are equally convinced that they are entitled to a larger share of it, tensions rise. Just ask Vladimir Putin. A more challenging question is: Have we lost all sense of how to behave when we fly?

Heather Poole, flight attendant and author of Cruising Attitude: Tales of Crashpads, Crew Drama and Crazy Passengers at 35,000 Feet, wrote about the state of hostilities in the wake of the Seat Wars of '14: "While most passengers dread turbulence, what leaves a lot of flight attendants dreading a long flight are on-board confrontations, which seem to be happening more often these days." Once, she witnessed a woman threaten to deck a teenaged girl if the girl dared to put her seat back.

A sense of entitlement is in the air, especially with the exasperated business travellers she calls "road warriors": "Ask a frequent flier to check a bag and they might lose it in front of everyone," Ms. Poole wrote in another piece. "Time is money. A road warrior doesn't do baggage claim."

Instances of "unruly passengers" are soaring, according to the International Air Transport Association, which recorded 6,000 such incidences of drunkenness, rowdiness, belligerence and bathroom intimacies in 2011, and more than 8,000 in 2013. Fewer than 500 were reported in 2007, when the IATA started keeping track (although we are flying more, and probably keeping better track).

"Unruly passenger" covers everything from the inept terrorist who fails to ignite his own underpants to the Bridezilla who, somewhere between Manchester and Barcelona, decides she no longer enjoys the company of one of her hen-party guests and begins to wallop her. (At least the assailant wore a wedding veil for handy identification.)

It covers the two women who appeared in an Ontario courtroom this week on charges they drunkenly disrupted a flight to Cuba. (The plane enjoyed a "ride of shame" escort by two fighter jets back to Toronto.) I'd like to think "unruly passenger" is too slight a punishment for the man who, despite repeated warnings, opened a pack of peanuts mid-flight and caused a four-year-old to go into anaphylactic shock.

These unruly passengers are merely the outliers (outflyers?), their behaviour overshadowing the myriad crabby ways we behave on airplanes, from armrest-hogging and overhead-bin-stuffing to aisle-charging the second the magical "ping" sounds at the end of a flight.

I'm not sure that in the golden age of air travel, when stewardesses plied the aisles with trays of Steak Diane, it was common to see misbehaving executives trussed in duct tape, entire families involved in multigenerational brawls on the way to Barbados or famous French actors peeing into bottles in full view of other passengers. The glitter has long since dulled. Flying is work, not pleasure; war, not peace. With the frequency of flying comes the contempt of familiarity.

This is perhaps not a popular way of framing the debate. We are supposed to blame the airlines rather than our lack of self-control for rotten flying experiences, pointing to their ever-scrimping seat allotments, which treat passengers like factory-farmed hens. Economy passengers, anyway: Business flyers are up front playing polo, or so I've read in that famous collection of fairy tales, Condé Nast Traveler.

It's true that airlines are putting on the squeeze, in pursuit of profit and cheaper airfares. They slyly introduce user fees and "slimline seating" (think "wad of Kleenex covered in EZ-Wipe fabric") to shove in one extra row. Airlines "view seats as money-makers, not just pieces of furniture," the Associated Press reported last fall. "Add a few inches of legroom and airlines can charge more for tickets. Take away a few inches and they can fit more seats on the plane."

If the airlines feel entitled to try to drain every last penny from passengers, passengers feel equally entitled – to carry ever more baggage onto ever-cheaper flights, and to erupt on Twitter and Facebook at each minor inconvenience. Or, sometimes to just erupt, over a seatback, fighting for their inch of the unfriendly skies. 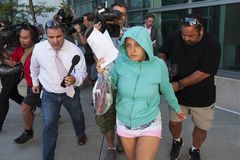 A United jet was diverted after a passenger used gadget to prohibit another from reclining
May 12, 2018
Budget carrier Ryanair offers business-class, a bid to woo Europe's austerity-minded companies
May 12, 2018
Follow Elizabeth Renzetti on Twitter @lizrenzetti
Report an error Editorial code of conduct
Due to technical reasons, we have temporarily removed commenting from our articles. We hope to have this fixed soon. Thank you for your patience. If you are looking to give feedback on our new site, please send it along to feedback@globeandmail.com. If you want to write a letter to the editor, please forward to letters@globeandmail.com.
Comments