Say what you may about the job Rachel Notley has done in her first year as Alberta Premier, you can't accuse her of getting jelly-legged in the face of a financial crisis that has shaken the province to its core.

This week, Ms. Notley's New Democratic Party government laid out its plan to deal with the fiscal disaster the oil-price crash has precipitated in a Speech from the Throne. It is one part Keynesian economics (spend, baby, spend) and one part unvarnished testimony (friends, this is not your grandparents' downturn – in fact, it may be something the likes of which we've never witnessed before).

"We do need to understand that this latest price bust is prolonged, deep and driven by important and fundamental changes in the world market," the speech read.

It also made another thing clear: Ms. Notley does not intend to stand idly by and just wait for this economic storm to wear itself out. She is setting up an advisory group on economic diversification and another on how folks in the oil sands can best cope with new hard caps being placed on greenhouse gas emissions.

She promised new social spending to look after the province's most vulnerable, a group whose numbers have grown dramatically in the past 18 months. Nor is the NDP backing away from an ambitious infrastructure-building program that will help give unemployed construction workers jobs again, but also add tens of billions of dollars to the provincial debt.

Notably, Ms. Notley avoided the temptation to take a gratuitous shot at any of her fellow premiers for standing in the way of pipelines to the east and west. Although it must have taken enormous willpower to not throw some snark in the direction of B.C. Premier Christy Clark, who recently used her own government's Throne Speech to do some finger-wagging at Alberta for the lousy record successive governments there had done of managing the province's finances. (Compared, that is, with the Clark government's glittering fiscal record.)

The Alberta Premier, it should be said, has been the picture of stoicism in the face of some pretty daunting challenges; an unruffled temperament that is all the more impressive given that she is a rookie leader. There is no handbook for dealing with this stuff; no perfect way versus wrong way. At the end of the day, you choose a course of action and pray like hell it works.

Some will question whether Ms. Notley's decision to push ahead with fairly radical environmental reforms, including a $3-billion carbon tax, is the right decision under the current circumstances. Well, firstly, it was something Alberta was either going to do on its own or likely have foisted on it (in some measure) by Ottawa. So there is that. And Ms. Notley was absolutely correct in surmising that improving the province's environmental cred would give it the best chance of getting a new pipeline built – although that bet seems somewhat questionable at the moment.

It's not surprising Ms. Notley's poll numbers have taken a beating since she assumed office almost a year ago. What politician in her shoes wouldn't suffer a similar fate? By the end of her four-year term, Alberta will have a debt that could easily exceed $60-billion. Its credit rating could suffer more downgrades. Efforts to diversify a one-trick economy likely won't bear fruit for some time.

The reality is, Alberta needs some help, and soon. If Ms. Notley can get one pipeline approved in the next couple of years, it would go a long way toward justifying many of the decisions she is taking now. She could say she managed to accomplish something previous Progressive Conservative governments in the province could not.

Alternatively, the other bit of assistance the Premier could use is from the Saudi kingdom. If the sheiks who control OPEC decide to end their gambit of flooding the world with cheap oil in an effort to kill shale production in the United States, it could help Alberta's situation immediately. It will happen at some point but when that is, no one knows for sure.

Meantime, Ms. Notley is doing what those in her predicament are expected to: forge on into the tempest. 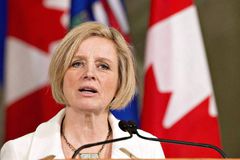 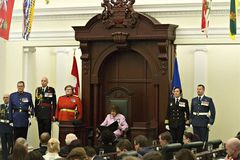