Ask B.C. Premier Christy Clark what goes through her mind when she considers the economic nightmare unfolding next door in Alberta and she doesn't hesitate for a second.

"It's terrible for Canada and therefore terrible for every province in Canada," she says. "And I hope it's a short-term problem." She says this without a hint of the kind of smugness you might expect from someone whose government just tabled its third consecutive balanced budget and anticipates posting a near-$1-billion surplus in the current fiscal year.

Ms. Clark has accomplished this feat in the face of widespread skepticism. A diversified economy has helped the province buffer itself from the inevitable price fluctuations in commodity markets. But perhaps the hardest thing the government has had to do on the road to balance is say no.

You won't find a group of public-sector workers that hasn't had to gulp hard on the deals it's made with B.C.'s Liberals. Most recently, the government allowed teachers to strike for five weeks before they ultimately surrendered last fall. The wage package they accepted – a 7.25 per cent increase over six years – was essentially the same one the government had been offering throughout most of the negotiations. It remained steadfast that teachers accept the same measly terms to which other public-sector unions had agreed.

This brings us to Alberta. Of the many pre-budget signals that Premier Jim Prentice has been sending out, one of the strongest has been to public-sector workers. The rich deals they have struck over the years can't be sustained in the current economy. In fact, Mr. Prentice believes they can't be managed even when the economy improves.

These contracts have always been a pet peeve of provincial governments across the country because of the domino effect they created.

Alberta wages for virtually any group – nurses, teachers, doctors, civil servants – have always been the benchmark used by counterpart unions and professional associations elsewhere. Not only have other provinces been forced to cough up more money than they've wanted to, they've also had to watch many of their top people flee to Canada's version of the United Arab Emirates to earn the kind of living they could never hope for at home.

The most recent Statistics Canada numbers from January puts Alberta on top for salaries among nurses, teachers and unionized workers generally (which would include the bureaucracy). The latest figures from the Canadian Institute for Health Information also indicate Alberta doctors earn the highest wages in the country.

As Mr. Prentice has pointed out, many of these deals have been achieved only by pillaging oil profits that rightly should have been put aside for future generations. That oil and the riches they produce are not the sole domain of the generation alive today. The Alberta Premier is right: The province has been living beyond its means for years now. And there is a long-term reckoning on the short-term horizon.

The B.C. Premier, meantime, has no doubt Mr. Prentice will use this crisis as an opportunity to get public-sector wages in line with the rest of the country.

"Over the years other [Alberta] premiers have been big spenders on public-sector wage increases and it's been a real problem especially for B.C., because nurses, doctors, teachers, they all have the chance to go right across that border.

"We, on the other hand, have had to go through strikes and our unions have had to swallow a lot of zeroes over the years and yet it's made us more efficient in many areas like health care, where we have the second-least expensive system in the country per capita and yet we have great health outcomes."

It may sound like bragging, but much of it is true. Now B.C. and the rest of the country will watch as the Alberta government struggles to get control of wage costs that were always too rich for the province's blood. 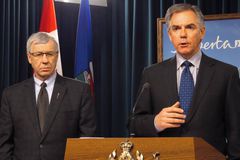 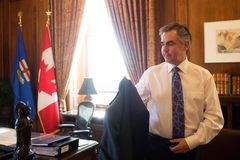