Even as the truth about how Jamal Khashoggi was killed in the Saudi consulate in Istanbul on Oct. 2 remains elusive, there is one vital lesson that Canada and the entire international community must already take to heart.

The days of governments around the world enabling, ignoring, excusing or – at best – crying crocodile tears about Saudi Arabia’s abysmal human-rights record must at long last come to an end.

Why is it that this particular case – the killing of one outspoken journalist, a critic of the Saudi regime, admittedly with a massive following in both social and traditional media – has been such a catalyzing moment that has gripped world attention for over two weeks now?

No doubt that is in part fuelled by the engrossing skulduggery and mystery that surrounds the case, straight off the screen of a political thriller. Add to that the macabre nature of how he is rumoured to have been killed and dismembered. There is certainly the audacity of this happening so blatantly, outside Saudi Arabia, and the well-founded speculation that responsibility may reach to high levels in the Saudi Royal Family. And throw in, of course, the political drama of rivals Turkey and Saudi Arabia who continue to jockey for influence in the Middle East, and the cringeworthy defence of the Saudis by U.S. President Donald Trump.

And then there is the heartbreaking love story: imagining Hatice Cengiz waiting for her fiancé to come back out from the consulate, unaware of the violence that was at that very moment ending his life.

Indeed, there is more than enough intrigue and human interest to power 1,000 tweets and an endless supply of front-page headlines.

But the waves of outrage about what has happened to Jamal Khashoggi also reflect a growing sense that we have had enough. Enough of tolerating Saudi Arabia’s unrelenting repression, institutionalized misogyny and discrimination, secrecy and injustice, and heartless, brutal war crimes that have been whitewashed and overlooked by the world for decades.

That has certainly been the case for Canada. With the commendable exception of Foreign Affairs Minister Chrystia Freeland’s well-publicized tweet in August, pressing for the release of imprisoned women’s-rights activists and blogger Raif Badawi, Canada has largely gone with the international consensus that it was best to seek favour with the Saudi royals rather than risk offence by raising such inconvenient matters as children killed in Saudi-led bombing raids in neighbouring Yemen, women treated as second-class citizens in nearly all aspects of public and private life, and medieval-style executions and flogging.

For Canada, across both Conservative and Liberal governments, that reached the disgraceful extent of selling $15-billion worth of armoured vehicles to the Saudi military, disingenuously asserting that Canadian-made weaponry won’t end up being drawn into war crimes in Yemen. Repeatedly we have heard the sorry excuse that there is no way out of that deal because what matters above all is that the world has confidence that Canada stands by its contracts.

Truly? Surely what matters above all is that the world knows Canada will not stand silently by and watch – and worse, contribute in any way to the commission of grave human-rights violations.

Notably, German Chancellor Angela Merkel has announced a freeze on Saudi arms sales. But Germany’s ban is by far the exception, not the rule.

What Saudi Arabia has heard, repeatedly, from Canada and governments everywhere is silence. Canada experienced that first-hand in August, hoping that one or two of our closest allies would show at least mild support for Ms. Freeland’s tweet. Crickets.

So, no surprise, the message that has been received in Riyadh is that there are no limits and no consequences for its contemptuous human-rights record; because in the end it is always the almighty dollar that will prevail.

Amid the sadness and cruelty, there could be no more meaningful legacy for Jamal Khashoggi. 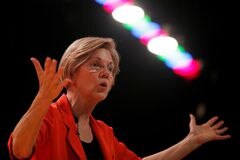