Chris Alexander is a former minister of citizenship and immigration who previously served in the Canadian embassy in Moscow, including as deputy head of mission.

Vladimir Putin is in trouble.

His first decade as president saw rising wages offset by vanishing freedoms. His second was dominated by military adventures to distract from economic stagnation at home.

But in recent years, his dark strategy has faltered. Last year, Moldova elected a president who supports the European Union; pro-democracy protests spread across Belarus; and Russian influence in Ukraine declined even further.

Now, Mr. Putin is facing his toughest opponent yet in Alexey Navalny, the Kremlin critic who survived a nerve-agent attack on his life and was arrested on his return to Russia on Jan. 19. In response, tens of thousands of Russians took to the streets, following a recent example – five months of rolling protests in Belarus – which together may comprise the gravest threat to Mr. Putin’s grip on power.

Mr. Putin’s Russia has seen plenty of demonstrations before – against falsified parliamentary elections in 2011-12, against the invasion of Ukraine in 2014, and against paltry pensions in 2018. But this time, the sense of grievance is deeper. In the words of Novaya Gazeta editor Kirill Martynov, protesters are seeking “the rule of law, personal safety for all, and an end to corruption.”

The status quo they seek to replace was brilliantly skewered in Mr. Navalny’s documentary, Putin’s Palace: History of the World’s Largest Bribe, a searing indictment of Mr. Putin’s grotesque venality that has been viewed more than 88 million times in only five days. Mr. Navalny takes aim at the mythos around Mr. Putin that decades of propaganda have relentlessly foisted on Russians – that he is an ordinary guy who cares about his fellow citizens and wants to “make Russia great again.” In Mr. Navalny’s take, the President has used pervasive lies, knee-jerk cronyism and industrial-scale corruption to make himself rich and Russia much poorer.

The video focuses on a secret US$1-billion compound on the Black Sea coast that he claims belongs to Mr. Putin and was funded by kickbacks from oligarchs. It explains how two KGB majors who served with Mr. Putin in Dresden ended up as heads of Russia’s arms export agency and its largest pipeline company; how Mr. Putin landed key early positions thanks to Ilya Traber, a key figure in the Tambov crime syndicate, and Pavel Pavlovich Borodin, the epicentre of corruption in Boris Yeltsin’s Kremlin; and how almost every one of Mr. Putin’s old St. Petersburg connections has come to lead an energy firm, a bank, or a security agency.

The costs of this alleged corruption are epochal. With Russia’s atavistic turn back to patrimonial norms, private property and individual freedom exist at the whim of the state, as in czarist and Soviet times. As a result, the legendary patience of long-suffering Russians is running out.

What will Mr. Putin do to prevent such protests from spreading further? Opposition leader Boris Nemtsov was killed in 2015; former prime minister Mikhail Kasyanov has received death threats; and Garry Kasparov has decamped to the United States. Mr. Putin’s machine will smear opponents as foreign agents or pedophiles – the same vile tactics used in Belarus or against Ukraine’s Euromaidan movement – but if these approaches fail, expect tighter controls on the internet and travel.

Even this may not be enough, however. Hopelessness now grips Russia. Memes of Mr. Putin as an aging gerontocrat are circulating widely – reminding Russians they have, for now, a “Czar for life.”

In the end, Russians will decide their own fate. The more toxic Mr. Putin’s leadership becomes, the greater the risk that his relationships with his enablers may fracture, which could finally take him down.

His main hope is to keep working the levers of influence the Kremlin spent decades building in Western capitals. But it cannot be business as usual with a regime that has become utterly synonymous with graft, political corruption and violence.

The hallmark of Mr. Putin’s Russia is a brutal, perverse, self-serving salmagundi of institutionalized kickbacks, backed by threats of violence. Russians now see it strangling their economic future, and it has done untold harm to democracies around the world. To stop it, we need stronger sanctions, unity among allies and partners to further isolate Mr. Putin and his cronies, and full support for activists in Belarus, Ukraine, Moldova – and now, in Russia itself. 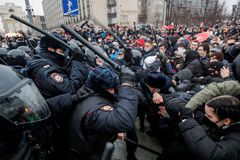 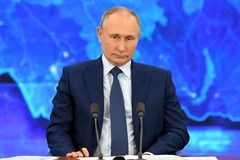 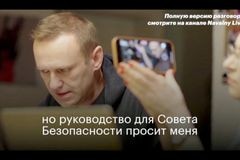