In a breakthrough, Ethiopia promised Egypt that it would only impound life-giving waters behind Africa’s largest edifice – the US$4.2-billion Grand Ethiopian Renaissance Dam – gradually, and during future rainy seasons – not throughout entire years. Egypt’s existence and prosperity depends on the flow of the Nile River to sustain its 101 million people.

Egypt threatened to bomb the dam and go to war if Ethiopia interrupted the steady coursing of highland waters that have enabled Egyptian life and livelihoods for at least two millennia. Ninety per cent of Egypt’s drinking water comes from the Nile and nearly all of its wheat is grown along its banks. Pharaonic civilization depended on Ethiopian waters. (The Blue Nile fills two-thirds of the waters of the world’s longest river, the White Nile the other third.)

Ethiopia has for several years been reluctant to compromise the manner in which its new dam would be put into service. It wanted to fill the lake behind the dam in six years. Egypt prefers an 11-year timetable. Yet, now, thanks to unexpected negotiations brokered by the U.S. Treasury in Washington, D.C., Ethiopia has quietly made a major concession to Egypt, and to peace. Egypt does have a large army, and bombers. The new Ethiopian government hardly wants war.

But the tentative agreement to meet Egypt halfway comes at great cost to Ethiopia and, to some extent, to the rest of Africa (the agreement still has to be signed later this month). The Grand Ethiopian Renaissance Dam, a colossal 6,500 megawatt generating barrage across the Blue Nile River just before it exits Ethiopia for Sudan (where it joins the White Nile at Khartoum and then proceeds inexorably over the Aswan Dam and past Cairo to the Mediterranean Sea), is wider than the Grand Coulee Dam across the Columbia River in Washington. It will produce three times more electrical power than the Aswan Dam. In the world, only the Three Gorges Dam across the Yangzte River in China, the Guri Dam across the Caroni River in Venezuela, and the Grand Coulee Dam generate more power.

For Ethiopia, the dam promises to bring its 109 million people fully into the modern age. Today, only 45 per cent of Ethiopians have access to grid-delivered electricity. When fully on stream in 2021 or 2022, the dam will produce more than enough power for all of Ethiopia’s current and anticipated future needs. Ethiopia also wants to earn dollars by exporting power to the rest of sub-Saharan Africa, where blackouts (even in South Africa) testify to immense shortages of electrical energy. (Spain produces more power than all of the countries in sub-Saharan Africa.) The Grand Ethiopian Renaissance Dam is meant to propel the continent’s renaissance as well as drive Ethiopia’s own.

But the agreement to fill the lake behind the dam slowly will mean that power will only be generated episodically, and after a long pause. This delay will compromise Ethiopia’s industrial uplift and slow increases in the impoverished country’s living standards. It will also delay any electrical generating benefit for the rest of Africa.

Additionally, Ethiopia (and Egypt’s) fate may be hostage to the climate crisis, which cruelly embraces Africa. Researchers predict that global warming will result in diminishing rainfalls, shortages of water and thus a much more prolonged period to fill the vast lake that will drive the dam’s turbines.

Already, 10 per cent of the 250 million people (from Uganda in the south to Egypt in the north) who live and rely on the Nile Basin for food sustenance, are faced with chronic water scarcity. In the next 30 years, populations will double in the basin and in some cases triple. That will mean by 2050 a full 50 per cent of people will face acute water shortages.

Moreover, climate researchers predict that there will be more and more frequent parching spells as the rainfall patterns that supply Africa fail. This change could put whole populations at risk as well as threaten the physical and financial viability of the dam itself. It could also lead to renewed wars over water, especially in the basin of the Nile.

If and when Egypt goes dry, the lake behind the dam could become a target. Access to water is life-giving, and irreplaceable. 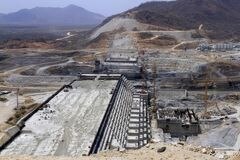