In the final weeks of 1950, as the Korean War escalated into an explosive conflict between superpowers, a young North Korean couple were evacuated from the smoldering ruins of their town by U.S. soldiers to a refugee relocation centre in the South. By 1953, when the war reached an awkward ceasefire, the refugee couple, then living in poverty in the South Korean port of Busan, had given birth to a son.

That son, now South Korean President Moon Jae-in, on Friday took an unprecedented step across the war’s ceasefire line, gripped the hand of his North Korean counterpart and pledged to begin negotiating an end to the war that has divided and endangered the Korean Peninsula for seven decades.

Mr. Moon’s meeting with North Korean dictator Kim Jong-un, and the resulting declaration calling for a “nuclear-free Korean Peninsula,” are unlikely to produce material results any time soon, and could well meet the fate of earlier such agreements, scuppered by Pyongyang’s recalcitrance and Seoul’s distrust.

But this is as close as leaders of the two Koreas have ever come to reaching peace. And the meeting’s successes, whatever they may prove to be, are entirely the work of Mr. Moon, whose careful diplomatic approach, which he had discussed years before he was elected President in 2017, has paid off. It has managed to sidestep the counterproductive threats made by U.S. President Donald Trump and by Mr. Kim, while keeping them both, along with China’s leaders, on board.

He has also taken by far the greatest political risk. By reconciling with a dictator who has repeatedly threatened his country with annihilation in a strategy that is far from guaranteed to succeed, he has effectively gambled his presidency on a bid to reduce the risk of war.

On the other hand, by holding his talks with Mr. Kim a month before Mr. Trump is expected to meet with the North Korean dictator, Mr. Moon has attached his name to the most successful part of the North-South dialogue – the initial declaration of peace and denuclearization talks. This leaves Mr. Trump with the far more difficult task of trying to negotiate some material progress toward those goals – a far more fraught engagement that puts the U.S. President at greater risk of failure or politically dangerous compromise.

“Given the political risks, you have to admire President Moon’s attempt to end this most intractable conflict peacefully,” remarked James Acton, a nuclear-policy specialist at the Carnegie Endowment for International Peace. However, “given the boilerplate language and lack of specificity on denuclearization, you have to be skeptical about sustainability.”

Mr. Moon’s diplomatic deftness is no accident. His upbringing in a North Korean refugee family may have made him far more acutely attuned to the nuances of Pyongyang’s messages and actions, and more prepared to seize the opportunity.

It was Mr. Moon who, when listening to one of Mr. Kim’s bellicose speeches on New Year’s Day, detected an opportunity for an opening. Mr. Trump, responding to the same speech, had heard only Mr. Kim’s cartoonish threat to use his “nuclear button,” and responded with an angry tweet boasting of his “much bigger & more powerful one than his.” Mr. Moon, listening more carefully, saw an opportunity for dialogue in some of the things Mr. Kim was saying, and invited Mr. Kim’s delegation to attend the Winter Olympics in South Korea the next month.

He has managed to keep the United States on side with the negotiations, despite constant complications created by an erratic U.S. President who often appears to lack a consistent strategy.

In September, Mr. Trump angrily accused Mr. Moon of “appeasement” and then declared to the United Nations General Assembly that he would “totally destroy” North Korea if it threatened the United States. Mr. Trump also campaigned against the U.S.-South Korea free-trade agreement and, in 2017, forced Seoul to renegotiate it, an act that has embroiled South Korean markets and enraged voters.

Mr. Moon has weathered such threats from Mr. Trump, as well as sabre-rattling and missile tests from Mr. Kim, to stay focused on his election campaign promise to reach a peace agreement.

This hasn’t been easy. His voters are terrified of North Korea and the United States, both of which have threatened actions that could destroy Seoul, and neither of which appear to Koreans to be particularly reliable or stable.

While South Korea’s military and diplomatic authorities continue their behind-the-scenes dialogue with Pyongyang, the focus will shift to Mr. Trump.

While the U.S. President is likely to declare his meeting with Mr. Kim a victory whatever happens, it could prove a failure unless Mr. Trump can pledge something substantial. No deal with North Korea will be considered a success unless Mr. Kim promises a complete end to his nuclear program – something that could happen only if the United States were to offer something substantial, such as a permanent withdrawal of its military from the Korean Peninsula. That would be politically unpopular in the United States.

Mr. Moon’s efforts have set up both Mr. Trump and Mr. Kim for a historic meeting that could allow the South Korean President’s careful diplomatic plans to advance – or, if mismanaged by either of them, could leave those plans, like earlier peace deals attempted between the Koreas, crushed and abandoned. 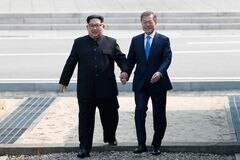 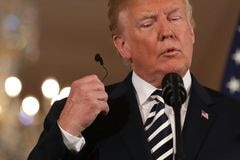 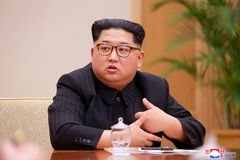