In late March, U.S. President Donald Trump went after the Governor of Michigan, who wanted more help from the White House in fighting the novel coronavirus. Mr. Trump wouldn’t call her by name, bellyaching that “all she does is sit there and blame the federal government.”

He quickly heard back from the leader of the Wolverine State. ”Hi, my name is Gretchen Whitmer, and that governor is me. … You said you stand with Michigan – prove it.”

This time, Ms. Whitmer responded by appearing on a talk show outfitted in a shirt with letters emblazoned, “That Woman in Michigan.” The shirts quickly became big sellers across the state.

Few politicians have parried and countered Mr. Trump as adroitly as the 48-year-old governor. He might well think twice about messing with her. She had no national profile just a few months ago but in part, thanks to him, has suddenly emerged as a Democratic Party star, one touted as a great choice for former vice-president Joe Biden’s running mate.

In confronting the pandemic, Ms. Whitmer instituted one of the toughest lockdown regimes in the nation. It prompted a vehement backlash by right-wing demonstrators who, in some instances carrying assault weapons, stormed the capitol building in Lansing, Mich. Mr. Trump declined to criticize them.

An incensed pilot charted a flight path spelling out “FU” with an arrow pointing at the Michigan governor’s mansion.

She now faces a lawsuit by her Republican-dominated legislature challenging her authority to prolong a state of emergency.

Thus far, she’s more than held her ground. With Michigan as a critical swing state in the coming presidential election, Democrats are banking on her, whether on the ticket or not, to help to move it into their column.

She crushed Republicans in the gubernatorial race in 2018. Despite them raising hell against her now, she still enjoys high popularity ratings in her state, far outpacing Mr. Trump.

Governors whose reputations are on the rise include ones who, like Ms. Whitmer and Ohio Governor Michael DeWine, got off the mark early in the COVID-19 fight, in contrast with the President. Ms. Whitmer declared a state of emergency on March 10 and within days had practically shut down the state entirely, long before most states took similar steps.

She may be just what the Democrats have been looking for. She combines guts and glamour. She wields power with panache. She’s progressive but not too far left.

A lawyer by profession, she served for more than a decade in both the Michigan House of Representatives and Senate, before winning the governorship on a promise to “Fix the damn roads.” In office, she tried to do that by bringing in a 45-cent gas tax. The measure backfired. Even her own party wouldn’t support it.

It was one of several setbacks for Ms. Whitmer last year. Nevertheless, the national Democratic Party gave her the honour of delivering the response to Mr. Trump’s State of the Union address in February. Her impressive platform skills were on national display.

Though she locks horns with them, even many of her Republican opponents admire Ms. Whitmer for her political and personal skills. She talks sports, tells dirty jokes, and is seen as genuine.

Life hasn’t been easy. She lost her mother to cancer, she’s been through a divorce. She disclosed in 2013, during an abortion debate in the state legislature, that she was raped some 20 years earlier as a freshman at Michigan State University.

On Tara Reade’s allegation that Joe Biden sexually assaulted her in 1993, Ms. Whitmer has sided with Mr. Biden. She told CNN that when it comes to accusations of sexual assault, “not every claim is equal."

Because of her looks, Ms. Whitmer has faced a lot of sexism, including taunts for wearing a dress that was criticized as too tight by some commentators at her 2019 State of the State address. She said the criticism was out of line. “Boys have teased me about my curves since the 5th grade. My mom said ‘hold your head high and don’t let it bother you.’ ”

She’s one of a galaxy of female stars coming to the fore in the Democratic Party. To name just a few, there’s Senators Amy Klobuchar, Elizabeth Warren and Kamala Harris, as well as Congresswoman Alexandria Ocasio-Cortez and former Georgia gubernatorial nominee Stacey Abrams.

Separating Ms. Whitmer from the pack is her service in a top leadership role. During the pandemic, “That Woman in Michigan” faces one of the direst tests imaginable. To the dismay of Mr. Trump, she’s showing herself to be up to the challenge.

Trump says Whitmer should ‘give a little’ to restart Michigan economy after capitol is rocked by protests
May 1, 2020 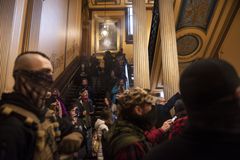 Politics and class collide as COVID-19 crisis exposes fault-lines in Michigan
May 1, 2020 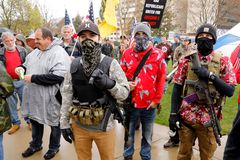 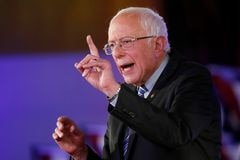