As more obnoxious insults were directed at Canada from Donald Trump – a country so repulsive that, in his own words, “they’re not going to be able to make a deal” – the North American free-trade agreement negotiations lurched precariously beyond last Friday’s deadline. We are witnessing American divide and conquer, might-is-right tactics at their very worst. Mexico has succumbed. Will Canada follow suit accepting salvage as the only option or will we stand firm?

First, let’s separate the substance from the bombast. The agreement with Mexico on autos is probably good for Canada as are many of the genuine, modernization elements (for example, digital commerce.) But to be negotiating with the threat of 25-per-cent tariffs on autos if we do not concede to all U.S. demands is odious. The chief executives of Detroit’s big three auto makers should explain bluntly to their President that such action would disrupt the efficiency of their integrated supply chains and raise the cost of cars for U.S. buyers.

Canada has already signalled a willingness to compromise modestly on other issues such as intellectual property and even on dairy products, but differences over the dispute settlement mechanism (of Chapter 19) remain as the single biggest obstacle to agreement.

Optics are important to Mr. Trump. As the Wall Street Journal observed recently, “if you give [him] an inch on trade, he will celebrate a mile.” Finding that inch without capitulating is the challenge for Canada. Time offers us some leverage and we should not be stampeded into a bad deal. Mr. Trump has already triggered the 90-day requirement for consultations with Congress with or without Canada.

But it is not that simple. He only has authority to negotiate a trilateral replacement and cannot unilaterally amend NAFTA without Canada’s signature. His administration wants the existing Congress to approve an agreement because if, as many suspect, the increasingly left-leaning Democrats win the House of Representatives in November, all bets are off for the approval of any trade agreement. Meanwhile, until abrogated, NAFTA remains in effect.

With negotiations hanging in the balance primarily over dispute settlement, the current situation is like déjà vu all over again as this was the issue that almost scuppered the initial free-trade negotiations in 1987. It may be time for top-level political intervention.

The dispute settlement issue was vital then, and is now because we are dealing with an economic giant more than 10 times our size, one that tends to render decisions on trade that are arbitrary, capricious and contravene U.S. trade law. The panels act as a check on such actions obliging each party to adhere strictly to their own trade laws. The mechanism is not foolproof. Canada has won on several issues such as softwood lumber and labelling on meat, but even when we have won, the United States has used every pretext to avoid honouring the result. Significantly, the same mechanism was strengthened in NAFTA, emulated by the WTO and in other major trade agreements. It helps temper the raw power imbalance.

Unfortunately, and despite rhetorical assurances, Mexico deserted Canada at the 11th hour on this key issue even though it is similarly vulnerable. Each country has to ultimately act in its own best interest in trade negotiations without relying on elusive goodwill among partners.

If we have learned anything about the Trump administration’s actions on trade to date it is that we need independent adjudication of disputes now more than ever. The tariffs on Canadian steel and aluminum were implemented on spurious “national security” grounds. They are a prime example of egregious actions that should be challenged. If we can modify U.S. behaviour with other safeguards, notably against dubious national security claims, so be it. But we need the spectre of binding dispute settlement to give greater security of access and certainty to our exporters.

The lessons of history are clear. Brian Mulroney stood firm on this issue in 1987 and the results more than vindicate his bold decision. The Trudeau government should also hold firm against Mr. Trump. While Mr. Mulroney had the advantage of dealing with presidents Ronald Reagan and George H.W. Bush, both of whom shared his basic objectives on trade, the notion of mutual benefit is not part of Mr. Trump’s trade vision.

When we are confronted with schoolyard bully tactics, the choice is clear. Concede and hope that the behaviour will improve, or resist in the hope that rational voices in Congress and business will constrain the President’s worst impulses. Remembering too, as George Schultz was fond of saying, “It is never over until it is over and, in Washington, it is never really over.” This is, however, time to stand firm. 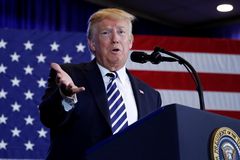 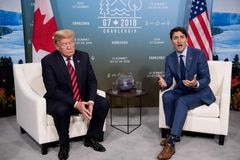 Opinion
A ‘win-win-win’ for Canada on NAFTA? Forget it
Subscriber content
August 31, 2018 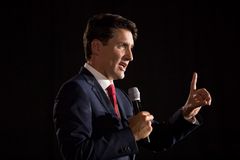