While driving through Pennsylvania on Monday, I asked a few people at various pit stops about the coming big historic day: For only the third time in history, a president will be impeached in the House of Representatives.

In Scranton, which is Joe Biden’s hometown, a guy pumping gas shot me the coldest of glares. It’s crazy, he said. Had I looked at how good things were? The job numbers? There were jobs everywhere, and incomes were rising. The Democrats have nothing, he continued, so they pull this B.S. Who gives a damn about Ukraine? Only the media.

In regards to at least the state of the country, he had a pertinent point. The Democrats could hardly have chosen a worse moment for the impeachment vote. The last thing you want, on the day you’re trying to make the case that the president is a disaster who should be removed from office, is for the news about that president’s administration to be good – in fact, very good.

Another record-breaking day for the stock market. Smiles on the faces of most every investor. A trade truce with China – even a new start-up agreement to give Americans a better deal. A resolution on continental trade, with the new NAFTA. On the war-and-peace front, 4,000 troops will soon withdraw from Afghanistan.

And as for the President’s alleged crimes and misdemeanours, there was last week’s Horowitz report about the origins of the Trump-Russia investigation. It gave him something to hurl back at his Democrat assailants – that the FBI and Justice Department were found to have used illegitimate practices in pursuing members of his campaign team. It’s all added up to more positive approval ratings for Mr. Trump.

On impeachment day, you want your target sinking in popularity. This President is rising.

At the same stop in Scranton as the Trump defender was a woman at the cashier’s counter who had a decidedly different opinion. What a sweet moment impeachment day for this man would be, she said – so great that she couldn’t wait.

Did you see, she asked, what that – and here she used an expletive that rhymes with “plastered" – said about Nancy Pelosi? Commenting on why the House Speaker had changed her mind on what to include in the articles of impeachment, Mr. Trump tweeted, “Because Nancy’s teeth were falling out of her mouth, and she didn’t have time to think!”

Incredible, the cashier said. Donald Trump insults his fellow Americans like this all the time. And now it’s payback time. The smear king is going to get the biggest insult a president can ever receive.

Many Americans are like her. They don’t follow the details of issues like the controversy around Ukraine. It is not what has them so riled up about him. Nor do they find his policies all that objectionable. But why the impeachment vote will be a sweet day for tens of millions is because he shames his own country.

He’s taken to calling FBI director James Comey – whose intervention in the 2016 election campaign helped get him elected – “a sleazebag”; prior to that, “slimeball” was his preferred appellation for him. House Judiciary chairman Jerrold Nadler is “Fat Jerry." Intelligence Committee chair Adam Schiff’s teeth are apparently well-moored, but he has another affliction; he’s “Pencil Neck.” Democrat opponent Joe Biden is “a rather low-IQ individual.” It’s not just his adversaries Mr. Trump slanders, but fellow Republicans, too. He’s called former defence secretary James Mattis “the world’s most overrated general.”

The smears, the lies and the distortions have been so frequent that they are now taken for granted by the media. As for Republicans, they are too cowardly to confront him. Congressman Mike Johnson, never reputed for his penetrating analyses, weighed in as follows: “The president has an unorthodox style of messaging.”

Though the Democratic House majority will approve the impeachment, Mr. Johnson and his fellow Republicans will vote in a bloc against it, because if they don’t, he will bludgeon them as he has so many others.

About half of Americans are like the cashier in Scranton. They are appalled and want him impeached. But the other half are like the man at the pump. They can overlook who he is for the results.

But the results are favourable these days. It’s why the Democrats will have a difficult time making hay following impeachment day. 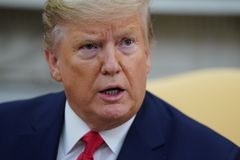 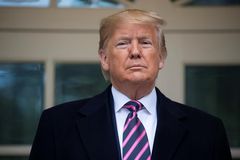