It seemed odd that anti-vaccination campaigners chose to protest outside hospitals in Canada’s major cities, considering that hospitals are one of the few places you won’t need a vaccination passport to enter. I mean, you might not be allowed into a cinema to see The Matrix 4, but if you pick up a potentially deadly virus because you refuse to get vaccinated, those doctors and nurses you’re screaming at will still look after you, because it’s their job.

Antagonizing health care workers in the middle of a pandemic is not only immoral but also right up there on the stupidity scale. Would you call your mechanic names before they’re about to fix your brakes? Probably not. But I’m not sure how much intellectual firepower exists in a movement that rails against “vax passrorts” (yes, this was an actual sign at a Vancouver protest).

I say “protests,” but that’s a milquetoast euphemism to describe the harassment aimed at health care workers. They’ve been screamed at, physically abused, and on top of that, had to witness their patients’ health being threatened by the mobs. One Vancouver paramedic told the CBC she was thinking about quitting after anti-vax crowds made it difficult to transfer a critically injured person to hospital.

Health care workers are hurting, too. We know this. What is less well known is that they were hurting before the pandemic began. Not just through burnout or stress, but because they work in professions that have unacceptably high levels of physical and verbal violence. The pandemic has exposed all kinds of cracks we were papering over; this is another.

If you’d asked me about dangerous professions, I might have said lumberjack or commercial fisherman or arborist, not personal support worker. That’s because the violence faced by health care workers is “a whispered epidemic,” as researchers Margaret Keith and James Brophy report in their new book, Code White: Sounding the Alarm on Violence Against Health Care Workers.

“We have learned that violence against health care staff is essentially out of control,” they write. “Besides experiencing physical and verbal assaults, they are being sexually harassed and assaulted, hassled and groped, and worse. And they are left feeling degraded and traumatized.”

The authors speak to nurses and PSWs who have been stabbed, punched, beaten with objects, racially abused and sexually harassed in various ways. Their anecdotal evidence is backed up with wider surveys: In a group of 150 registered practical nurses, for example, every single one says they’ve been subject to violence. The Ontario Workplace Safety and Insurance Board announced that, in 2014, “lost-time injuries due to workplace violence in the health care sector greatly outnumber those in other sectors surveyed.” The Canadian Federation of Nurses Unions reports that 61 per cent of registered nurses have experienced serious workplace violence “in contrast to 15 per cent in other industries.”

Even worse, those who have been injured or traumatized at work often feel completely unsupported. They have to fight for compensation, time off to recover, or mental-health assistance. Their managers, also stretched thin, fail to give them the help they need. They’re told to keep quiet about the violence they’ve experienced, or risk being punished if they flout their employers’ HR guidelines. One ER nurse who experienced depression and flashbacks after a serious assault says, “I feel defeated. Just totally defeated. Because nobody’s really doing anything about it.”

The issue of violence is worse for those with the least power in the health care system. The people who work as personal support workers, most of them racialized women, take the most abuse and have the least recourse to help. Many of them just stay silent and take it.

The incredible thing is that most of the health care workers in the book don’t lay blame on the patients who are assaulting them. They bend over backwards to make excuses for these people, who are driven to the edge of reason by a penny-pinching system that doesn’t value their humanity: People who are in pain, or living with dementia, or feeling humiliated. An under-resourced and understaffed hospital can be a dangerous place for patients and workers alike.

The authors of Code White offer a variety of suggestions for countering violence, primary among them increasing staffing in health care settings. It’s safer, for example, for two workers to attend a patient who’s frantic or violent, but that’s often not possible. They also recommend better training, better industrial design, and guarantees of protection for workers who do speak up about their abuse.

All of this aligns with what I’ve heard from nurses over the past year, who describe a system that was already near breaking even before the pandemic came along. Now, on top of everything else, they’re experiencing the mind-wrecking dissonance of caring for patients who won’t care for themselves by getting a vaccine. Or who scream abuse at them from the streets below the hospital window. The profession is hemorrhaging staff, which is hardly a surprise. There’s a heartening surge in applications to nursing schools, but that expansion also relies on investment from forward-looking governments.

It’s hard to imagine the country coming together to support substantial investment in health care when a substantial proportion of the population believes that masks are “face diapers” and that vaccine passports are the doorway to tyranny. But I continue to live in hope, because we’ve seen the alternative on the streets, screaming abuse. That alternative is a recipe for sickness, not health.

Alberta backs off demand for nurse pay cuts in recent round of collective bargaining
September 8, 2021 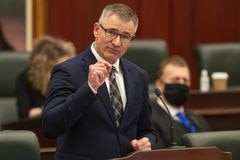 Canadian nurses are leaving in droves, worn down by 16 merciless months on the front lines of COVID-19
July 16, 2021 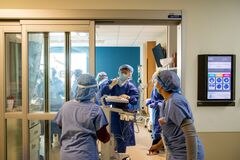 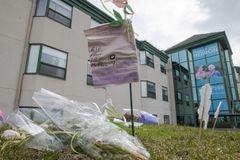