Donna Lindell is a professor and former executive.

Twelve people, three weeks and dozens of puzzle pieces dumped out in front of us. The challenge: Figure out the picture. After a little more than eight hours of deliberations and countless additional conversations before then, long walks in our own heads and sleepless nights, the picture that was formed was not one we wanted to see; yet, it was one that needed to be confirmed. Guilty.

The puzzle pieces, evidence. The 12 people, jurors. Each one brought their individual perspective, insights, expertise, experience and intelligence. Collectively, we collaborated, expressed, opined, theorized and ultimately made evidence-based decisions – beyond a reasonable doubt – to deliver a verdict.

Jury duty in Canada prohibits us from discussing the details of deliberation. So I won’t. But in many ways the consequence of the protection that it ultimately affords the citizens who give up their time to serve the Crown means a lot of unresolved, unarticulated emotions and thoughts that get locked in our own heads, dying to get out. I’m currently wrestling with getting those thoughts out, locked in a box so I can move on. Easier said than done.

I was foreperson. The way I saw it, it was an opportunity to put my skills and experience as a college professor and former executive to work in a different setting. It also allowed me to keep my mind focused on an outcome that was based on evidence and fact (both direct and indirect), where innocence is presumed until otherwise proven, based on consent of the people around the table.

As professors, leading a class, or as researchers, we are in essence working to move our students along the continuum of learning that gets them to critically think in a way that connects disparate pieces of information to draw a conclusion. Got an idea? Back it up with evidence to see it through. Got a hunch? Prove it to me with facts and data. The same applies in a deliberation room. In some instances, inferences needed to be drawn, connections made but we did so based on evidence, not on assumption.

As professors, it is also our job to facilitate different personalities. And in our little microcosm of a jury, we had a full myriad of types; each one aiding the problem solving, each one taking a leadership role or a position when they needed to, and when it mattered. But the important thing was that each one was afforded the opportunity to have such a role, to be heard and to advocate – both for themselves and for the victim (and in some instances the accused), in a safe and respectful space.

As professors, it is our job to make sure the quiet one gets to articulate their reasoning and not be written off as disinterested. They are being thoughtful, processing and seeing things that the others who need to talk their way through their thought process, can’t see.

We need to make sure the ones who have a different opinion can feel safe to express themselves, demand better answers than what they are getting and offer their perspective to the solution process.

We need to allow the ones who want to hurry up and get it done to feel that there is a process and that it is moving along, while ensuring no one is being left behind.

We need to give the ones who need to be an expert an opportunity to demonstrate that expertise, yet feel safe when they need to be vulnerable and admit that they are struggling.

We need to give the ones who seem to be content to follow the opportunity to speak up and to assure them that we are moving forward and not back.

We need to be sensitive to the ones who are more sensitive and give them the space to catch their breath. We need to hear them and to support their needs.

Collectively, I have never worked with such an amazing group of individuals. It was a remarkable experience and to those who instantly design excuses for why they cannot do jury duty, I urge you to give it a try and keep an open mind. Sure, I saw things and heard things that were ripped right out of an episode of any crime drama you can name. Sure, this will live with me forever. To this day, I can’t read a crime novel or watch a crime TV show. But I’m opting to look at the positive that this experience brought.

I’m looking at my three weeks with 12 people, four lawyers, one judge, several expert witnesses and one accused as professional development. A puzzle I was given the opportunity to solve. It was exhilarating, exhausting and rewarding. It was also imperfect. Not all of the pieces fit, not all of our questions were answered. But in the end, we agreed – based on fact – on a final verdict. In the end, a group of strangers worked together and collaborated and came to a consensus.

We were thanked by the judge and by the prosecuting attorney. My only regret: We left in a hurry. We hustled out to resume our lives, and get the hell away from the details we were forced to process, analyze, connect and conclude. But in the days that followed, I wanted to reach out to the good people I spent three weeks with and say, “Thank you.” “Nice to meet you.” “Great job.”

As a professor, this final step would be the evaluation. We got an A. Everyone did. In the business world, ironically, it’s called a postmortem. Apt. We did good. 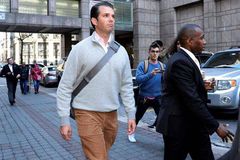 Jury duty anyone? North Carolina county finds few takers
February 28, 2018
11-year-old Pennsylvania Boy Scout called for jury duty
February 20, 2018
Follow us on Twitter @globedebate Opens in a new window
Report an error
Due to technical reasons, we have temporarily removed commenting from our articles. We hope to have this fixed soon. Thank you for your patience. If you are looking to give feedback on our new site, please send it along to feedback@globeandmail.com. If you want to write a letter to the editor, please forward to letters@globeandmail.com.
Comments