When the federal government released its economic and fiscal update in mid-December, with the sudden deterioration in its finances – from the $76-billion in deficits over five years projected in last March’s budget to $112-billion nine months later – it had a soothing explanation at the ready.

It was all just a bit of accounting mumbo jumbo, you understand: The ballooning deficits were “largely driven” by “actuarial revaluations of employee pensions” in light of lower-than-expected interest rates, which, as every schoolchild knows, imply a change in the discount rate at which the net present value of future zzzzzzzz. Nothing to worry your pretty little heads about, in other words. All part of what the government calls its “Responsible Fiscal Plan.”

The update even presented this as something of a good news story. By separating the cost of changes in future pension liabilities, which are “particularly sensitive to changes in the forecast for short- and long-term interest rates,” from the rest of spending, the government was striking a blow for transparency – and not at all trying to confuse and distract the public or pretending to be the victim of circumstances beyond its control.

And yet the government’s own numbers show this explanation is hooey. Take the current fiscal year, the one we are still in, the one the budget was supposed to tell us about. The deficit is now estimated to be about $6-billion higher than forecast, on the strength of a $9.6-billion overrun in program spending. The largest single component of program spending is for what are called direct program expenses – which, at $165-billion, are fully $13-billion over budget, with similar excesses pencilled in for the years to follow. And of that $13-billion, only about a third is, by the government’s account, owing to those pesky interest-driven changes in pension liabilities.

Most of the remainder, roughly $6-billion annually, is in general operating expenses: wages, paperclips – the everyday costs of running the government. Even in the current fiscal year, these have somehow rocketed from $89.8-billion to $95.4-billion. Nowhere in the update is this increase explained or even explicitly stated.

Whatever may be behind the government’s inability to keep operating expenses within the budget’s already generous allowance, it has little to do with any sudden or unforeseen change in pension obligations. Indeed, it was already being picked up in reports by the independent Parliamentary Budget Officer as early as April (direct program expenses: $154.1-billion), in June ($157.2-billion) and again in November ($159.1-billion). So spending was already $7-billion over budget, even before the update. And no one outside Finance, including the Parliamentary Budget Officer himself, who I spoke to, seems to know why.

Not that spending was much under control before. If the deficit is now headed for $27-billion, compared with the roughly $5-billion surplus the Harper government’s last budget projected for this year, it has nothing to do with any shortfall in revenues: At $340-billion, they are actually somewhat higher than the Harper budget expected. Neither is it because of increases in transfers to the provinces for health care or equalization or in the costs of statutory programs such as elderly benefits or employment insurance, all of which remain at or below Harper-projected levels.

Rather, aside from the enriched Canada Child Benefit (cost: about $5-billion and change more annually than the programs it replaced), the four-year explosion of spending under the Liberals is entirely driven, again, by increases in direct program expenses. These may be $13-billion over what they were supposed to be in Budget 2019, but they are $35-billion over what Budget 2015 projected they would be.

And all of this, of course, is before the cost of the Liberals’ election promises is factored in: roughly another $10-billion annually, not including the cost of increasing the basic personal amount of tax-exempt income to $15,000. Assuming the Grits keep these, Budget 2020 could well see forecast deficits start to exceed $30-billion. In peacetime. In the 12th year of an economic expansion. Subject to further upward revisions.

Very little of this would have anything to do with unexpected changes in interest rates. Indeed, while these are expected to add an average of $4.4-billion annually to federal pension costs, they are also expected to save the government $3.9-billion annually in charges on the national debt. Strangely, the update placed rather less emphasis on this point. 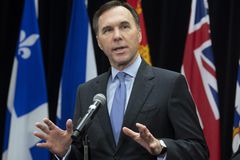