Margaret Atwood’s latest novel is The Testaments, co-winner of this year’s Booker Prize.

I’m a reader of mainstream newspapers. Whatever their foibles, at least we know where they stand. They must try to report accurately and check their facts on pain of being sued, so I tend to rely on what’s in them.

But lately, reading about our upcoming election, I can’t quite believe my eyes. Has Conservative Leader Andrew Scheer been quoted correctly? He wants to build a “national energy corridor” from sea to sea, through which he’s going to “move oil, gas, hydro, telecommunications” and “other linear infrastructure?” It sounds so efficient! But we’ll be footing the bill, Fellow Taxpaying People, so maybe we’d better dig out our specs and read the fine print.

So wait a minute. You run the highly flammable hydrocarbons through the same pipeline-shaped item as the “hydro,” which I guess means a lot of electrical wires. And alongside all of that you run “telecommunications,” which I guess means fibre optic cables or something similar? Sea to sea, and bingo, we’re connected. How unifying. Am I the only person thinking “One terrorist bomb and there goes the whole shebang?”

And suppose the corridor is rendered bomb-proof along its entire 5,000 or so kilometres. Who will control the off-on switch that regulates the flow – of gas and oil, of electricity, of digital information? Would that be a Darth-Vader-suited Energy Corridor Master in – let me guess – Alberta? While turning off the lights – not to mention the heat and the television – for some perceived transgression by, say, Ontario or Quebec, will this shadowy personage exclaim, “Bwa ha ha! Let those eastern bastards freeze in the dark!” Or worse: “Kiss my toe, craven Easterners, or no more Netflix for you!” Am I being paranoid?

Even if I am, how much will this thing cost and how long would it take to build? Mr. Scheer won’t tell us, most likely because he doesn’t know. A hundred billion, according to one estimate, and decades at the very least. Needless to say, we’ll have to rip up that pesky environmental legislation. That’s a given; premiers like Jason Kenney and Doug Ford have already done it. While you’re at it, any First Nations that stand in the way will have to be brushed aside; Mr. Scheer has already made it clear that he will not respect the United Nations Declaration on the Rights of Indigenous Peoples.

Why would we wish to commit to this megalomaniac pipe dream? Because it will make us all rich? Because it will cure male-pattern baldness? About the same hope of the former as of the latter. The dream of fabulous, everlasting wealth through fossil fuels is already receding, for the simple reason that the climate crisis is real. If allowed to proceed unchecked, and especially if the oceans die, thus cutting off our oxygen supply, it will doom the human race.

More and more people in the financial world are recognizing that fact. According to Mark Carney, the governor of the Bank of England, industries that aren’t “part of the solution ... will be punished" and "companies that don’t adapt will go bankrupt without question.”

And unless we start the global transition soon, that transition – when it comes – will be abrupt and could trigger a world financial collapse. Viewed from this perspective, Mr. Scheer’s Magic Drainpipe looks like a very expensive piece of obsolete technology.

That’s certainly the perspective the people of the huge international movement called Extinction Rebellion are taking. Their badge looks similar to an hourglass, and it means time is running out. They want politicians to get serious about reversing the bioplanetary crisis, and although some of them aren’t yet of voting age, they will be soon. They’ll be coming to a foyer or a roadway near you, soon.

“But what about us?” ask adult Canadians. “We can vote, but who should we vote for? We don’t like any of them.”

I feel your pain. But we’re not crowning Miss Congeniality. We aren’t living in the land of Best. The most you can hope for is the least worst. So start at the bottom – the bottom being the one who denies there is even a problem – and work up from there. Vote for the party that knows there really is a climate crisis, that has even a semi-viable plan and that might actually win in your riding. You can’t afford to be squeamish. A while ago people were urging you to consider your grandkids, but things are moving faster. It’s not just your grandkids you need to worry about now. It’s you. 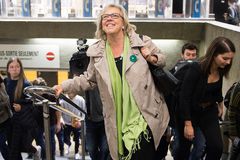