The day I met a serial killer, I was 21 years old, an art student living in Halifax. It was late on the afternoon of Saturday, June 1, 1996. I know that date for certain because he was arrested a few hours after I met him and charged with three counts of first-degree murder.

I have seen him described as both a serial killer and a spree killer, and there are varying definitions for both. You could certainly call him a spree killer, since the murders he committed all happened one after another on a single night. I’ve always thought of him as a serial killer, because of how he targeted certain victims, and because the murders were so intentional and specific. I call him a serial killer because, by the time I met him, 12 days after the murders, he’d acquired a new gun and a knife and several cartridges of ammunition. I call him a serial killer because I’ve always believed that when he walked up to my friend Trina and me on the street in Halifax that day, he was looking for more victims. We, unwittingly, told him exactly where to find them.

Trina and I had been hanging my graduation show at the student gallery at the Nova Scotia College of Art and Design, near the waterfront on Granville Street in Halifax. The show was a series of photographs that included a large number of portraits of drag queens and transgender people in Halifax, the focus of my final term of work.

Sometimes I photographed my subjects as they got dressed or put on their make-up, recording their captivating process of transformation and change. I photographed them at clubs, performing, backstage. I took glossy, gauzy, glamorous studio portraits of them like they were Hollywood starlets.

It was different then, long before the word trans entered the mainstream lexicon – except for the sweeping term, transvestite – and when the trans experience was more often contained to gay bars, or shut inside private parties and homes. It had taken me months to earn the trust of those in the community in Halifax before they were willing to be photographed. Violence and what was then called “gay bashing” were common among those I met. Many had been victimized before.

Trina and I had just finished hanging my photographs in the waterfront gallery and were sitting on a bench outside when a man approached us. He was about 30, clean cut and handsome.

He was carrying a bag from a local tourist shop. Trina remembers that the USS Theodore Roosevelt was docked in Halifax at the time, and that we initially thought he was a sailor, one of the many young men the massive aircraft carrier had spilled into the streets, looking for the diversions and pleasures to be found on land.

He was nice and friendly. Trina had little tolerance for strange men, but he was likeable enough that she didn’t tell him to get lost. Instead, we all stood together chatting in the sun, and after he asked enough times for somewhere “alternative” to go, we knew he was asking us for a gay bar. There was a big drag show at one of the clubs that night. Many of the people I’d been photographing were going, and we were, too. We told him about it, and promised that it would be a lot of fun.

The next time we saw him, it was his picture staring out from the front page of a newspaper. We learned then that his name was Marcello Palma, and that he’d been arrested not long after we spoke to him. Police had already been waiting for him at his hotel, and undercover officers were apparently already watching him on the street. A couple of the news stories mentioned the shopping bag he was carrying when he spoke to us.

His killing spree began in Toronto on Victoria Day. He fought with his mistress, and lost his temper in the office of his air conditioning business. That night, he went to his parents’ house, and when he left he carried with him a knife and a handgun with five hollow-point bullets loaded inside.

He pulled up to Brenda Ludgate first, luring the 25-year-old inside his red pickup truck with the promise of $25, then shooting her in the back of the head and leaving her body on the ground behind a warehouse in Parkdale. Then he picked up 19-year-old Shawn Keegan and 31-year-old Deanna Wilkinson, both born men but reported at the time to have been selling their bodies as women in the area around Homewood Avenue, a place better known in those days as “Tranny Alley” or “the Tranny Stroll.”

He killed them all in barely more than an hour. There was a storm that night, and the crack and pop of thunder and the holiday fireworks covered the sound of gunshots in the streets.

He stayed in Toronto for a week before fleeing to Montreal, then on to Halifax, where he bought a new Winchester rifle and ammunition and checked into two different rooms at two different Halifax hotels, both under his own name. He was on his way back to one of them when he was arrested. There had been a Canada-wide warrant for his arrest, and police had been warned he was considered armed and dangerous. News stories said he had been carrying eight firearm cartridges and a knife, as well as a rosary he got from a priest in Montreal.

After his arrest, police found among his possessions a book called Without Conscience: The Disturbing World of Psychopaths Among Us.

Officers made sure he hadn’t killed anybody in Halifax before Toronto detectives accompanied him back to Ontario to face his charges.

He was convicted of three counts of first-degree murder in the spring of 2001 and sentenced to life in prison with no chance of parole for 25 years, which will be about three years from now. I found him mentioned in a news story from last fall about a theatre program for prison inmates. The story said Mr. Palma had the starring role in the production.

In the years that followed our meeting, I became a newspaper reporter, and came to specialize in court and crime. I’ve met more killers, learned more about murder and murderers, about fraudsters and sex offenders, about people who are able to mould and manipulate the people around them.

I have had people swear to me, repeatedly and convincingly, that they are innocent, only to see evidence in court that proves undoubtedly that they aren’t. In other cases, I’m still not sure.

I have met and covered both spree killers and serial killers since then, and have thought often about the space between their regular lives and what lay beneath.

I’ve thought often about my brief meeting with Marcello Palma, even more so recently because of the unfolding case of Bruce McArthur, currently accused of killing eight men in Toronto’s LGBTQ community. I think about the people who knew Mr. McArthur before, now forced to grapple with the knowledge the person who had been to them a friend, a lover, a father, a gardener, a mall Santa, may have been also – or maybe instead – a monster.

One of Mr. McArthur’s friends described him as the kindest person they’d ever known; others were so surprised they couldn’t even comprehend that it was allegedly the same person.

“It was an absolute shock,” one friend told a reporter. “If the concept is hiding in plain sight, he did it.”

Like illness or injury, it’s easier to understand evil if it shows on the outside. How do you comprehend that someone could hold something so brutal within themselves, completely hidden and undetected? How could someone capable of such horror appear just like everyone else?

It’s tempting to think you can see it or sense it somehow. But Marcello Palma showed me long ago that sometimes you can’t.

Mr. Palma told his psychiatrist he had sex with people described then as “prostitutes, transvestites and homosexuals,” and admitted he thought about killing people, especially “street people or ‘scum.’”

As allegedly with Mr. McArthur, there were moments his anger and violence spilled forth. But except for those glimpses, what Mr. Palma was capable of remained largely unseen. News stories described his beautiful wife, his new baby daughter, his tidy house.

“It freaks me out. He looks like a nice guy,” said one neighbour, speaking to a reporter after news that Mr. Palma was wanted in the three murders.

“It’s a dreadful thing,” said another. “They seemed to be such a nice family.”

Even after Mr. Palma was arrested, his girlfriend continued to support him, seemingly unable or unwilling to comprehend that the allegations could be true. As she said in court, “I’ll always love the person that I knew.”

At times, I’ve wondered what would have happened if Mr. Palma had not been arrested that night, if he had killed one of my friends after I’d unknowingly sent him to the bar to find them. It’s a question with no answer, a what-if, dark and unknowable.

When I think back to that meeting, I’m always struck by how there was no feeling of danger, no strangeness, that I had no instinct to get away. I’ve always remembered how nice he seemed, how much we liked him.

I remember how we invited him to the show that night, and how as he walked away toward his hotel on the waterfront, he smiled and told us he’d probably see us there.

​ “Who could have known?” asked one of Mr. Palma’s neighbours, speaking to a reporter after news of his arrest. “We didn’t even know enough to be scared.”

Opinion
In the LGBTQ community, we won’t be truly safe until we realize the police deserve to exist
August 5, 2018 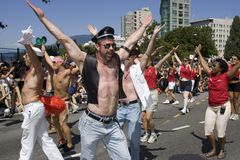 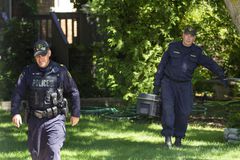