Omer Aziz is the author of the forthcoming book Brown Boy: A Story of Race, Religion, and Inheritance.

The code on the basketball court was always the same: You pulled up, called next, and when it was your turn, checked up the ball. It did not matter where you were from or what your parents did. This was the ritual on every court in and around Toronto. The court was open to everyone.

Now that the Toronto Raptors are in the NBA Finals for the first time, a palpable feeling of arrival has engulfed Canada’s largest city. It is as though with this achievement the Raptors have put both the city and its commitment to basketball on the map. Many people are only now waking up to the reality that kids from the peripheries have known for a long time: that Toronto is a basketball city, and that the love for the sport runs to the heart of this town.

The love runs to the very ethos and culture of Toronto, runs through all the impoverished areas, the forgotten places, all the immigrant neighbourhoods that are the future of this city.

Growing up, basketball was more than just a sport for everyone I knew. It was our religion, our way of being, often the only source of meaning. Kids wore shirts to school that said, “Ball is life.” It was meant literally. We played before school, during recess, late into the night. We wore our shorts under our jeans just in case there was an opportunity. Everyone – every single person – dreamed of being in the NBA. At the local YMCA, and at the neighbourhood court with its busted-up rim, the boys played like their lives were at stake, hoping for their shot. Legends developed around the best players, and they became like myths who hovered above us younger boys just coming to the game.

Black, brown, Asian kids – the children of immigrants – especially gravitated toward the sport. Many of the best players on the court were poor. Basketball was democratic in spirit, inviting to all, and truly multicultural. It was the sport of the marginalized classes. None of the kids I knew could afford to play competitive ice hockey, and as a boy, I got the feeling that hockey was an exclusive sport, one played by people who were not us.

For the myth-makers in Canada, whose vision of this country led them to wrap the flag around hockey, basketball was secondary. This was despite the fact – as every Canadian basketball fan likes to say – the sport was invented by a Canadian. The Toronto Huskies were one of the original teams in the Basketball Association of America in 1946, a league that rebranded itself as the NBA a few years later.

Since the Raptors joined the league in 1995, fans have endured the kind of drama that is the stuff of movies. The draft busts; superstars skipping town; the years of darkness followed by years of coming so close. The Toronto curse: of being really good, but not great.

All that is now past, because Toronto is led by a man who has mastered every element of the game. His steely resolve and unshakable focus have been riveting to watch, exemplifying the values of this country better than any of our politicians.

The love that Toronto has for its superstar – who is reluctant to receive it, and who never basks in his fame – is informed by the pain that is never expressed. Barack Obama once observed that you could learn a lot about a man based on his basketball game alone. Eleven years ago, at the age of 16, a high-school player from Riverside, Calif., dropped 17 points for his team and then broke down and cried in his mother’s arms. Kawhi Leonard had learned 24 hours earlier that his father had been shot to death. As a Los Angeles Times reporter put it then, “It was a scene with so much sorrow and distress that I turned my head and walked away.” Perhaps the reason why this man is now reaching unthinkable heights is because he has already conquered more than any of us can fathom. He has become a symbol of dignity and grace at a time when the world sorely needs people like him.

A playoff run like this can change an entire childhood, and it already has. People have shared stories about their daughters practising the “Kawhi shot” outside. Playgrounds all over Toronto – all over the country – have little boys and girls the size of fire hydrants looking up at the rim and wondering when they’ll get their shot.

Whatever happens, Toronto has proved that it is intent on becoming a basketball mecca, and on taking the crown from the reigning champions. We are the outsiders, and in this rainy and endless spring, we should take heed of our superstar’s words and just enjoy the moment. Have fun with it. Because all of us are watching history.

Explainer
There’s plenty of room on the Toronto Raptors playoff bandwagon. Here’s what to know
June 14, 2019 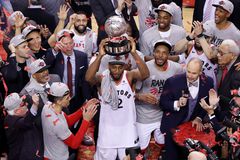